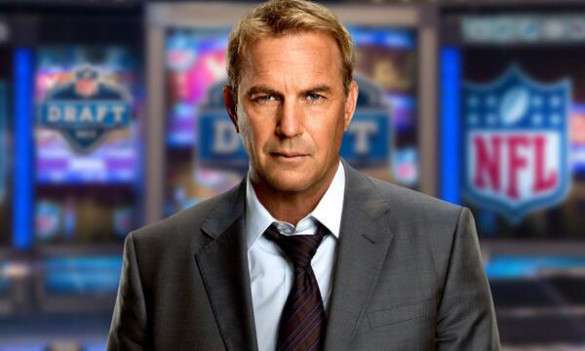 Synopsis: At the NFL Draft, general manager Sonny Weaver has the opportunity to rebuild his team when he trades for the number one pick. He must decide what he’s willing to sacrifice on a life-changing day for a few hundred young men with NFL dreams.

INTRO
For the record, I’m a Lion fans and a Michigan fan, so this movie and all it’s Ohio love made me want to vomit. That being said, for the sake of this review, I’m throwing all of that (or most of it) out the window to be fair to the film. Also, it’s not the best movie of all time. –> This link explains that sentence.

DIRECTION
Ivan Reitman has a pretty impressive resume, but he’s mostly known in the comedy world and this film is no Ghostbusters. However, Reitman is experienced and does a solid job of making this film feel real and engulfs you within the National Football League (NFL) world. Everytime Reitman introduces us to a new NFL team, we see overhead shots of the city, the team stadium and the team it represents, which I thought was a solid choice and brings a fun element to the film. Because of the nature of the film, many scenes involve two people conversing via phone and again, Reitman is creative in moving the camera around while using an overlapping split screen method, which worked for me. The story lags in some areas but Reitman’s comedic timing was mostly on point and when we finally got to the war room, it was exciting. The end was a bit cheesy as you’d imagine, but overal Reitman does a fine job here.

SCRIPT
First of all, it’s easy to tell here that the writers are big Browns and Ohio State fans, which could throw some people off (or everyone from my neck of the woods). The story centers around the Cleveland Browns and it’s General Manager, Sonny Weaver Jr. (Kevin Costner), who is prepping for the 2014 NFL Draft. We begin in the early morning when Sonny and his girlfriend Ali (Jennifer Garner), a Browns lawyer, are discussing some important personal issues, which plays throughout the film. Sonny gets a call from the Seattle Seahawks offering a big trade that will land the Browns with the #1 overall pick, but at a big price. Sonny accepts the deal and now the drama is set as this shocks most of the NFL and media experts. The Browns are expected to pick Heisman trophy winner and high prospect, Bo Callahan (Josh Pence), but Sonny has some questions. From here, it’s a cat and mouse game as Sonny is trying to organize a team he wants, all while getting high pressure from Head Coach Penn (Denis Leary) and Browns Owner Anthony Molina (Frank Langella). The script is well played from a football business perspective and shows the difficulty of picking who’s best for the team, yet playing into the hands of the what the owner wants. Much of the dialogue is well thought out, funny at the right times, and crystallizes well in the climax of the film. While the story deviates at times to unnecessary sub-plots, the main elements are intriguing and was pretty engaging. For Browns fans, it probably plays more like a fairy tale though, given the Browns haven’t ever done much in real life.

PERFORMANCES
The opening scene of the film features Chris Berman introducing us to the 2014 NFL Draft, which was a nice move and probably would get devoted NFL fans excited. Most of the NFL Network and ESPN crews featured here do a pretty good job of keeping things realistic, even though all the players are fictional. This is a film that is up Kevin Costner’s wheelhouse, as he’s not fit for action thrillers like Jack Ryan: Shadow Recruit or 3 Days to Kill. Costner is pretty great here, especially once the draft begins and we see him going at it in the “war room”. Jennifer Gardner also brings a solid performance, although she doesn’t have as much to do. Denis Leary and Chadwick Boseman also bring good supporting performances, as does Arian Foster, a real running back for the Houston Texans and first time actor. And what are you going to say about Frank Langella? He’s always terrific.

SCORE
John Debney gets the nod to score here and he’s really good here. His tracks are short, up-tempo and give that athletic kind of feel that was perfect for this film. It’s a score that won’t get much recognition but it’s a descent listen outside of the film, as well as inside the film.

FINAL THOUGHTS
This film was pretty enjoyable, although some sub-plots needed to be trimmed down to let the main storylines play out. It would of been more fun to see Sonny reeling and dealing all day and getting that behind-the-scenes look showcasing the chaos of Draft Day. And while we get some of that, it could of been much more. I hate the Browns and Ohio State even more, but with all that laid down, for what the film is, it’s one to check out.