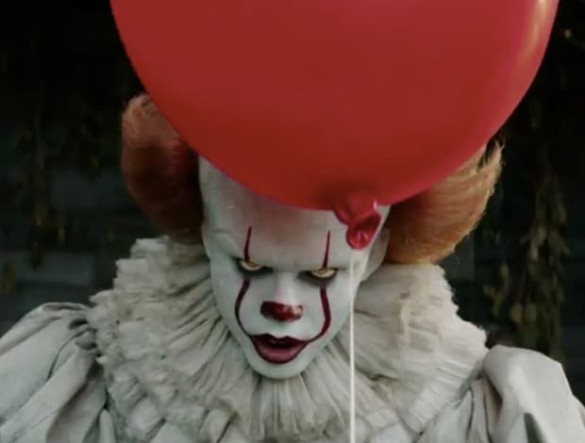 Synopsis: A group of bullied kids band together when a monster, taking the appearance of a clown, begins hunting children.

When examining the exterior of It, it’s not hard to grasp where all the skepticism is sprouting from. Albeit the petrifying appearance of Pennywise the Clown, the marketing team was rather stale in attempting to inflict the true horrors of such a demented story like this throughout the numerous trailers and TV spots. However, due to the masterwork of King’s novel from which this was adapted and a nauseatingly hypnotizing performance from Bill Skarsgård, it leaves behind a continuous uneasy feeling that increases as the movie progresses.

A film like It doesn’t bare anything flashy. It doesn’t possess any revolutionizing horror craftsmanship, but instead bestows exaggerated jump scares and basic beat you over the head horror antics. Despite that category of unoriginality, it’s accommodated into a project like this perfectly. Especially the decade in which the film takes place. A small, simple-minded town like this amid the near emergence of the 1990s begins to feel like it’s growing its own facade in to the films by the rising action is set in motion. It’s not how it’s incorporated, but the way it’s being exploited.

It’s somewhat refreshing to see that Andy Muschietti discloses his own sense of personal style in to such a grand horror blockbuster of mainstream media. While the movie obviously proceeded down a much darker path than it’s 1990’s predecessor, it manages to sprinkle in brief instances of the campiness that was made so iconic by Tim Curry. Muschietti certainly leaves a distinct mark on this rendering of the book which shall be remembered if it were to ever be remade.

Quite possibly the most noteworthy element regarding ‘It’ are the ample performances from each actor/actress. Bill Skarsgård is electrifying, stealing almost every fervid scene he has dialogue in. He’s absolutely frightening in every meaning of the word but also gives a genuinely integral portrayal of Pennywise. Additionally, the child actors give impressive performances too. Taking into consideration how young they are, the maturity level and skill set of each adolescent actor/actress is unbelievable at such a young age. Easily one of the strongest acting ensembles in a movie as of late, and just one of the most keen in general.

You can’t go without saying that It is liable for a couple of drawbacks. When it’s not trying to scare the soul out of you, it’s comedic presence is dialed up for a very immense amount of time. A lot of the humor is amusing essentially because it’s coming from the kids. However, the two aspects of horror and comedy, aren’t the most accurately presented here. The tone can unwittingly become inconsistent for a handful of scenes and will remain that way momentarily before snapping back. It feels as though the blueprint attached to the film might’ve been a bit scatterbrained at one point. That feeling emerges a lot more frequently than it should but by the film’s climax, it begins to settle down and ultimately balances out between the two. It’s also fair to say that towards the end of the second act, interest might be a bit diminished for some people. Topping out at 135 minutes, not only is it a bit longer than your average film, but a fair of an amount longer than a horror film. It’s pretty much inevitable that you’re going to run into problems like that for the runtime it boasts. But nonetheless, it’s nothing to seriously dwell on.

As stated before, It is definitely heart-pounding terror at its best. It’s alarmingly dangerous when presenting scares but also carries some very fascinating, soft-hearted aspects of a coming-of-age film. At the end of the day however, I’m sure it’ll give you a good scare.