Movie Review: ‘Isabella’ is a Kaleidoscopic Film of Uncertainties 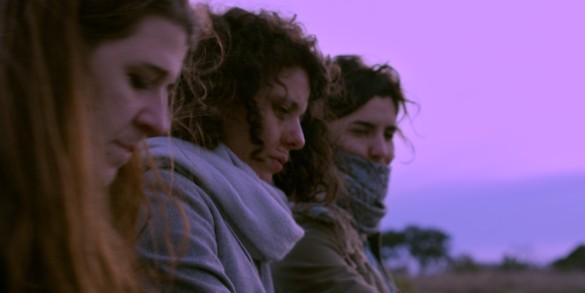 Synopsis: Mariel wants to play Isabella in Shakespeare’s “Measure for Measure”. Luciana, who is also an actress, helps her rehearse the part. But during the audition, Mariel realizes that Luciana is trying out for the same role.

Color purple is all over Matías Piñeiro’s Isabella. Purple isn’t easily found in nature; it’s a color often associated with wealth because it used to be a coveted and complex hue to acquire, and only leaders and nobility would wear it in their clothing. And since many of these leaders were considered descendants of God, the color would also be linked with some sort of spirituality and mystery. And that’s what Isabella is: a complicated film populated by uncertainties and mystery with a borderline inaccessible, yet subtly rewarding non-linear narrative.

The movie follows Mariel (María Villar), an actress who would love to play the role of Isabella in a local play of William Shakespeare’s Measure for Measure. However, she has financial problems to worry about first and the best way to solve them would be to ask her estranged brother for money. How should she approach this? The solution is Luciana (Agustina Muñoz), a friend and fellow actress who happens to be dating her brother and who agrees to help her convince him if she keeps rehearsing for the Isabella role.

Isabella jumps between timelines to create a cinematographic puzzle. We see glimpses of Mariel’s life in very different situations; she’s working in an art gallery in one scene and auditioning for Measure for Measure a in the next one. Throughout all of this, Piñeiro focuses on the complicated relationship between Mariel and Luciana; two women looking for something. Despite always being linked with the pursuit of the Isabella role, there’s no competence between them. They support each other and create a bond through their passion for acting.

In Measure for Measure, Isabella has an audience with tyrant Angelo, who promises to forgive her brother’s death penalty in exchange for sex. The film creates a reflection of this through the audition process. The abuse doesn’t come in the form of a disgusting proposition (nothing is straightforward in a Piñeiro film), but it’s there in the fact that Mariel has to play the part while locked in a room; we can only hear the director through a glass. Just like Isabella is at the mercy of Angelo, Mariel and Luciana are at the mercy of the director.

The challenging nature of its storytelling makes Isabella a hard pill to swallow.  Sometimes, the film it’s too immersed in the heads of its characters to be rewarding. Piñeiro doesn’t give answers and never gives away the final piece of the puzzle, but creates room for interpretation. And that’s what the Isabella character has done throughout the decades: she’s a polarizing figure whose actions have given birth to numerous questions and interpretations. Isabella plays with times, moods, ideas, and performances to generate analysis and hunger for discernment. It’s a kaleidoscopic enigma that is worth diving in while always having in mind that payoff is mostly nonexistent.