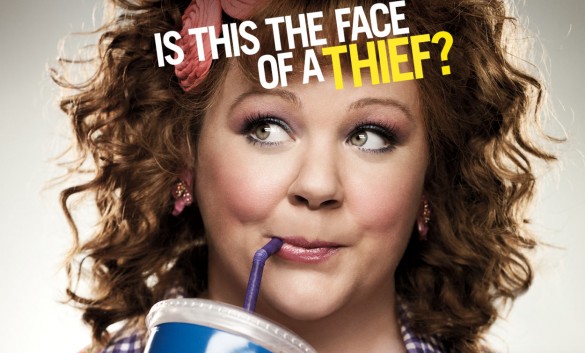 Synopsis: Mild-mannered businessman Sandy Patterson travels from Denver to Miami to confront the deceptively harmless-looking woman who has been living it up after stealing Sandy’s identity.

DIRECTION
I am not a big fan of Seth Gordon’s movies, except for Horrible Bosses, but this one is no exception. Identity Thief is very simple; what you see is what you get. The trailer mostly gives away all of the funny parts giving this movie a marketing fail. Outside of Bateman, McCarthy, and Cho, Gordon doesn’t get great performances out of his actors. There are some shots in this movie that are absolutely not necessary in a film like this. It’s beyond cheesy and there is no chemistry in this movie at all. It takes some weird and crazy turns that is distracting, but in some cases is unpredictable. It gets a little wild at times, but the ending does save this movie a little bit. The ending takes a great sentimental turn that brings a strong finish to an otherwise mediocre movie.

SCRIPT
The script of this movie is terrible. The idea and the concept behind it is good, but it was poorly executed. The dialogue is the worst part of it all and leaves you feeling uncomfortable and embarrassed for the writers and actors. McCarthy and Bateman’s chemistry together brings a little light to the script with their performances, but it’s the only saving grace. There are plot points in this film that are ridiculous, even for a comedy where exaggeration is a key element. The are story arcs that are never finished that make you wonder why they were even in the movie at all. There are characters introduced in this film that have no reason to be in it and it steals the spotlight away from Bateman and McCarthy a little bit when it’s not necessary. It’s unfortunate for Bateman and McCarthy as I do enjoy them as performers. The comedic elements to this movie were great in theory, but it dragged on and became dull. The ending to the script was great though and I’ll bump it up half a grade based on that alone.

PERFORMANCES
Bateman and McCarthy are great in this film. They have a wonderful chemistry and pull out great performances. Bateman has this dry humor as he is being revengeful and angry throughout the film that is hysterical. McCarthy, while its no Bridesmaids, is always funny. It’s a shame that the marketing for this film ruins most of her funny moments. John Cho is also great in this movie, but he’s hardly in the film, essentially making his role very minimal. I also loved Amanda Peet, who plays Bateman’s wife in the movie. She’s always been a favorite of mine since her role in Saving Silverman, which is one of my favorite comedies of all time. Outside of that, the performances are not that great. T.I. is terrible in this movie as well as most of the other small acting roles. I do love T.I. as a musician, just not as an actor in this film. This movie would of been 10x better off if it were just Bateman and McCarthy alone for 50 minutes of the movie just going at each other and letting their natural comedic self take over.

SCORE
Christopher Lennertz score isn’t bad, but it doesn’t add tons of value to this movie. Most of the great musical elements to this movie are songs outside of the score. The score itself is okay, but because of its value it gets a low grade.