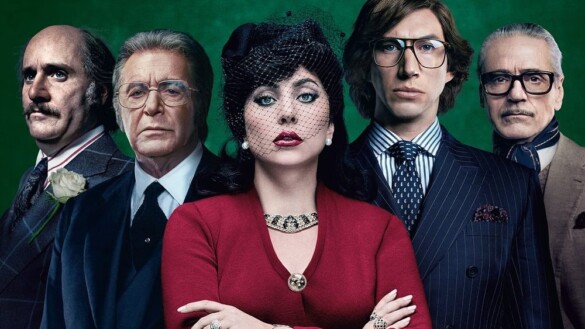 Synopsis: When an ambitious outsider marries into the legendary Gucci fashion dynasty, it sets off a series of events that threaten not only the family business, but the entire family itself.

Whenever there is an opportunity to fictionalize a true story, especially one that’s already sensational, there is an inherent danger of going over the top—subtlety is hard to achieve if the subject matter itself is already larger than life. In the case of House of Gucci, the new Ridley Scott film which stars Lady Gaga and Adam Driver, being larger than life is just the beginning. The rest is just delicious gravy.

The film begins in Italy in the early 70’s, and Gaga plays Patrizia Reggiani, an ambitious young woman who falls in love with Maurizio Gucci (Driver), the heir to the Gucci fashion empire. But when Patrizia meets and marries Maurizio, he is merely a modest law student, with no interest in being part of the family business. However, when Maurizio’s uncle Aldo (Al Pacino) pleads with Maurizio to join him in New York to run the company because his own son, Paolo (Jared Leto) is incompetent, he acquiesces. But when internal family politics begin to threaten Maurizio’s rising position within the company, Patrizia’s true colors and ambitions are revealed, as she manipulates everyone, including Maurizio, in order to maintain her position within the family and control over the business. When Maurizio finally sees her for the power-hungry social climber that she is, it sets off a deadly chain reaction that threatens not only the survival of the family, but the future of the family business.

While based on a true story, the temptation for embellishment runs rampant here, especially in the characterizations of the main players. And embellish they do. Even if we assume these characters were already colorful, due to their Italian heritage, immense wealth and fame, Scott gives his actors plenty of room to play and explore, and every actor makes full use of that freedom to create, most especially Gaga and Leto. Gaga is exceptionally well-cast in a role that plays not only to the pop icon’s natural flamboyance and personality, but to her sense of fun and fearlessness. As Gaga is a performer known to push the envelope artistically, it’s no surprise to see her blur the boundaries of camp and melodrama, blending surprising comic instincts with, well, just plain good instincts. If ever it feels as if a role was made for an actor, it’s here.

As for Leto, he is more known to make a role bend to him, often infusing his performances with exaggeration and eccentricities, an actor known for going above and beyond the simple physical requirements of a role to deliver performances that range from the truly sublime, as in his Oscar-winning role in Dallas Buyers Club, to the truly inane, as his weirdly wrong performance in The Little Things. But in House of Gucci, Leto finds the perfect character to explore his inherent need to create outside the bounds of what’s written on the page. Thankfully, Scott allows him to play because Leto’s embodiment of the ego-driven, intellectually-challenged Paolo Gucci is the best thing in House of Gucci, and that’s saying a lot, considering how much fun Gaga’s performance becomes. But what Leto does is truly transform into this buffoonish, childish, desperate, and sad man who is seeking nothing more than his father’s approval—or anyone’s approval. It would be so easy to have played the part simply for laughs, or to pathetic effect, but Leto finds a way to do both, resulting in a truly melancholy character who we simultaneously feel sorry for and mock. It is as transformative a performance as what he did in Dallas Buyers Club, and should be recognized as heartily. Leto’s hair and makeup team, which include Federica Castelli, AnnaCarin Lock, and Göran Lundström, deserve much acclaim for helping Leto disappear into his character so effectively, but it is Leto that brings it home and makes it land for the audience so effectively and should not be overlooked this awards season.

Perhaps even more shocking than Lady Gaga and Jared Leto’s truly award-worthy performances is the lack of one from Adam Driver.  Driver, a perennial awards favorite, an actor who can seemingly deliver in any kind of role, which he has already proven this year alone in Annette and The Last Duel, is shockingly invisible in House of Gucci. Whether that is because he is overshadowed by Gaga and Leto or not is beside the point, because Driver’s character serves as the anchor to this crazy story and, in Driver’s hands, one would have expected him to hold down the fort a bit better. But instead, he is stiff and one-note, and his character is utterly devoid of any personality.

Another surprise is Al Pacino’s performance. While this film would seem tailor-made for the over-the-top, Pacino-being-Pacino roles that he’s turned in lately, the legendary actor actually gets back to acting in his role as the Gucci company boss who wants to take his nephew under his wing. Scott manages to get a classically impressive performance out of Pacino, instead of a self-spoofing one, and it is lovely to see. It’s also lovely to see Jeremy Irons on screen, but he’s a bit all over the place playing an elderly Italian fashion designer. Ditto for Salma Hayek, who plays a psychic who inspires Patrizia to her paranoid delusions. Hayek’s role and storyline seems tacked on, and Hayek is done a true disservice, even though she does the best that she can with it.

There’s no way to discuss House of Gucci without talking about the accents. It seems absurd that actors who are playing Italians are all speaking English in an Italian accent, but it is what it is, and there’s no way to enjoy this film without just going with it. Some accents are better than others, some are much more extreme than others, and some disappear altogether, but Scott is famously a director who doesn’t care one bit about accent accuracy (see also: The Last Duel), so artistic license rules the day.

Accents aside, House of Gucci shows that, thankfully, Ridley Scott can still deliver an exceptionally well-made and enjoyable film, even after recent disappointments. In addition to two truly engaging performances that alone would make this film worth seeing, all the elements do come together to result in a stylish, slick production. Although the film does meander a bit narratively and struggles to get to its ultimate destination, it does manage to take the viewer on a slightly satirical, slightly campy, melodramatic yet massively entertaining ride that bemuses, delights and, yes, makes you ever so slightly gaga.