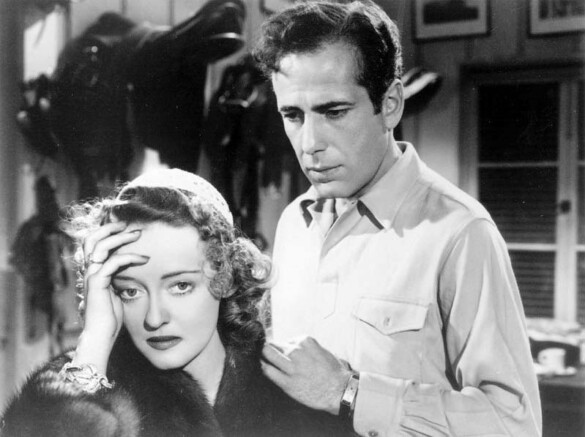 Pauline Kael once said “Meryl Streep just about always seems miscast. (She makes a career out of seeming to overcome being miscast.)” She applied this quote to an actress who is renowned for her versatility and appearances in prestige pictures that didn’t make much money at the box office, but the statement is equally applicable to a thespian who had a very different appeal.

Bette Davis was a fairly unique presence in Old Hollywood and, like Streep, she often played parts that didn’t seem entirely suited to her screen persona. She excelled at playing divine bitches who struggled against a system that disadvantaged women, but she existed at a time when major stars were expected to churn out three-hanky weepies. Davis first achieved success in Of Human Bondage (1934), in which she played a femme fatale who destroyed her lover’s life, but, in trying to become a respectable starlet, she decided that she needed to expand her range. In the mid-1930’s, Greta Garbo was the critic’s darling and she earned rave reviews for her one note performances as sad, tragic women who sacrifice everything for love. All of her vehicles were engineered to suit her cold, aloof presence and her films tended to be built around her. Davis wanted to appear in the sort of high budget, high profile productions that Garbo regularly appeared in and fought with the studios to obtain roles in more grandiose films. In 1938, she became Queen of the Warner Brothers lot and, over the next seven years, she enjoyed an unprecedented run of success. She still played dirty girls every now and then, but she also made an effort to appear in costume dramas about sad, lovesick women.

Dark Victory (1939) might be the prototypical Bette Davis weepie and it is representative of the discord between Davis’s acting style and the romantic melodrama genre. In the film, she plays a spirited, supposedly immature heiress named Judith Traherne. She hangs out with a group of other rich socialites in Long Island, New York and spends her days training her show jumping horses. Her Irish stablemaster Michael O’Leary (Humphrey Bogart) has long held unrequited feelings for Traherne, but she regularly spars with him over his treatment of her horses. Traherne’s love life takes a backseat to her concerns over her health when she learns that she is suffering from a brain tumor. This news shakes her to the core and she chooses to become a more selfless, giving person in her final months. She also enters into a relationship with Steele and forsakes her party girl lifestyle to become a housewife. When it comes time to face down death, she is happy with her Stepford Wife lifestyle. 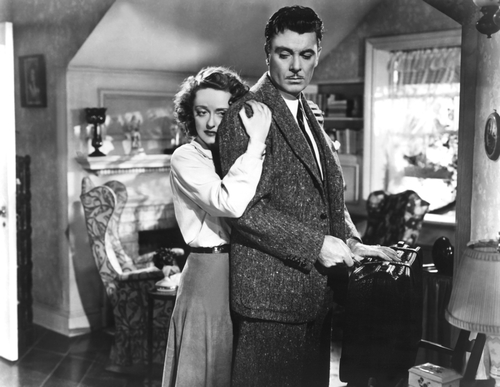 Davis clearly struggled with playing such a passive, self-pitying character and you can almost smell her contempt for her character in the scenes in which she throws herself at her boyfriend’s feet. She has to tone down her intensity to play the part and you lose a lot of the Davis-isms that make her other performances so powerful. Rather than getting to bring her own unique charisma to the role, she ends up doing an impression of another movie star. This film, and others like it, become fascinating as an example of a performer with highly distinctive ticks, attempting to tackle parts that are not suited to her talents. Davis is never convincing as a carefree young girl who just loves horses, but the script insists that she’s a flaky twenty-three-year-old. She gazes at Brent with the derision of a furious gangster moll who is preparing to crush a pathetic insect, and yet we are told that she adores him. There is an obvious disconnect between Davis’s rapacious, indignant performance and the ideas that the script wants to get across. It makes for an intriguing experiment, but Davis’s fans would probably tell you to skip Dark Victory altogether and head straight for All About Eve (1950).

Nothing about the story makes sense, as it’s impossible to understand why Traherne would be drop everything to be with a boring doctor. There is also the disturbing implication that Traherne ‘deserves’ to be punished for living a supposedly immoral lifestyle at the beginning of the film. As this was made under the Hays Code, the script isn’t allowed to explicitly acknowledge the fact that Traherne might have had premarital sex, but this implication certainly hangs in the air. More generally, we are meant to resent her for being a young, independent woman who is wealthy enough to avoid marrying a man who will have complete control over her. When she has a rational argument with one of her employees, we are meant to see this as bratty behaviour that could be straightened out by a strict, reasonable husband. Her illness and impending death are supposed to teach her a lesson and she gives up her carefree, enjoyable lifestyle to take care of a dull, completely unexceptional man. These issues become especially prominent in the final scene, in which Traherne briefly becomes blind and proceeds to die of her illness. She is so self sacrificing that she sends her husband off on a business trip and quietly, elegantly passes away. The scene is disturbing because it implies that women should just quietly accept suffering and only deserve adulation when they don’t attempt to push back against the struggles that they face. Traherne is ennobled when she resigns herself to the fact that she is going to die. When she puts up a fight against the controlling men around her, she is demonised.

It is a picture that is saved by Davis’s glamour. When she lies on her bed and poses for the camera, it’s like seeing a George Hurrell photograph come to life. Those legendary, god-given eyes are hypnotic and you can’t tear your eyes away from the slight curl in her lips. She always seems to be sneering at the audience that lovingly gazes upon her, and we end up loving her for it. She’s gorgeous enough to get away with ‘hot girl shit’ and she throws in some classic Davis line readings to remind you that she’s a force to be reckoned with. If you want to see Davis at the height of her pulchritude, look no further than this film.

At the end of the day, it is rather difficult to make a defense for the film itself. It’s a piss-poor rip-off of a Garbo vehicle and Garbo’s films were nothing to write home about in the first place.