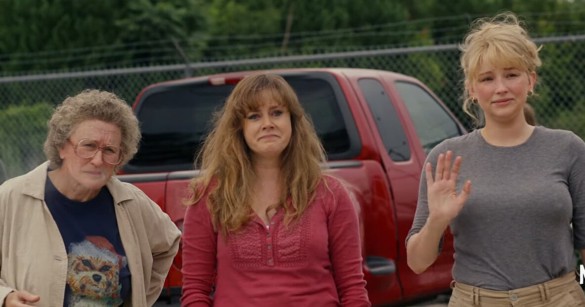 Synopsis: A Yale law student drawn back to his hometown grapples with family history, Appalachian values, and the American dream.

This has become a film that, along with others such as 2019’s Cats, has been a punching bag for those on Twitter to roast and spread hate towards. Whilst I am certainly not here to defend the film, with it being of poor quality, I do want to spend this first part sharing the positives from my experience of watching Hillbilly Elegy.

The performances in this film for the most part are decent, but it is Amy Adams and Glenn Close who really holds this film together. No matter what script they are given or what roles they fill their shoes in, they both give 100% in every performance that they get their hands on. Adams to me is a stand-out in this film, and that is not just down to her performance. The supporting cast is fine, but some actors just do not commit to the material they are given or play along with the rest of the drama that this film tries, and I mean try, to build up.

If this was a film about drug abuse and the pressures of a single mother in the south of the US, this would already be a much stronger film. This story works best when the film focuses on that aspect, and that is because Amy Adams sells the role of the single mother. These scenes are emotional, have a huge impact, and leave a mark on the film. It makes you think about the way single mothers, especially of a young age, are treated and the pressure put on them, and that is when the film works.

Sadly, that is only a small portion of this film as this is the story of J.D. Vance and the events before an interview that will change his life. Quite simply, it is very hard to care about J.D. and this major interview he has, as it screams the definition of “first-world problems”. There is a scene in which J.D. calls his girlfriend, Usha, panicking about this smaller interview that he has going. What he ends up panicking over is the cutlery that he is using and whether it is being used correctly. I simply do not understand why dialogue like this helps us relate to J.D. or care about him, which is what we are meant to do.

The film has no idea what tone it wants to go for or what message it wants to send. It is hard to understand where J.D. lies morally, especially with his relationship with his mother. In one scene, he will raise his voice trying to defend her from the hillbilly stereotype, and then two scenes later he will say that he is done helping her through drug addictions because she abandoned him. This could be presented as a dilemma that J.D. has to go through, but his only moral conflict seems to be whether he believes he should take a 10-hour drive to go to an interview, unsure if he will get the job or not.

I have heard some people, including our own JD on InSession Film, describe this film as one that would suit being on Lifetime. There are some great ideas and scenes hidden away in this film, but I definitely see where critics are going with that idea. J.D. Vance does not feel like a real character here. He has the most amazing girlfriend on the other side of the phone, someone who is not only smart and able to get him out of any situation – including the cutlery situation – but who is understanding completely of his situation. It does not feel natural that somebody like Usha would be so patient and loving and have zero flaws whatsoever, it is flawed writing in itself to present her in such a perfect way.

I want to end this review by clarifying my position when it comes to Hillbilly Elegy. I do not think it is the worst film of the year, let alone the worst film on Netflix this year (and if you think that is the case, you have not seen The Last Thing He Wanted). There are things that are salvageable in this film, such as the performances from Adams and Close and a few strong and emotional sequences, particularly from Adams. However, that is in no way meaning that this film is good. I do not plan to sit through this again, I do not care to do more research into J.D. Vance or the book that this film is based on, and I do not encourage anyone to check this film out except for the purposes that it may get some acting nominations at the Oscars. Even with the strong performances, Adams and Close have given better performances than this, and they better not win for this film.