Movie Review: Hell or High Water is one of the best films of summer 2016 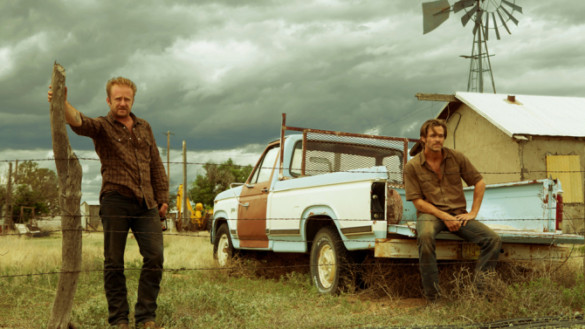 Synopsis: A divorced dad and his ex-con brother resort to a desperate scheme in order to save their family’s ranch in West Texas.

If you saw David Mackenzie’s Starred Up in 2014, you knew that Hell or High Water would have atmosphere, and boy, does it. The gritty, stark aesthetic of west Texas is viscerally on display. The heat is almost palpable and the rural setting works as its own character. Mackenzie is a director that fully knows how to capture a specific world, on a limited budget at that, and he is on his “A” game with Hell or High Water.

Toby (Chris Pine) and Tanner (Ben Foster) are brothers who are robbing banks and on the run. Marcus (Jeff Bridges) and Alberto (Gil Birmingham) are the two Texas Rangers who have been tasked to find and catch these thieves. These Rangers certainly know their way around rural Texas, but they are not aware of how motivated Toby and Tanner are, which makes these brothers more difficult to find than they originally thought. We find out that Toby is desperate and he is willing to go to extreme lengths to take care of his family, as well as serve a nice side dish of revenge in the process.

Taylor Sheridan’s screenplay is a shining star in Hell or High Water. His script is streamlined, well balanced and thematically very rich. Additionally, it’s very funny. For as thrilling as this film is, it’s chock full of humor at the same time. It certainly helps when you have the comedic chops of Jeff Bridges, who is as hysterical as ever in High Water. His dynamics with Gil Birmingham are quite terrific and their chemistry couples very well with Sheridan’s solid writing. The same can be said for Ben Foster and Chris Pine, who are playful at times, but overall offer a more dramatic arc that crystallizes in some rather provocative ways.

Sheridan smartly interweaves two different story threads together, while giving weight to them thematically and making each character’s motives very lucid. There is real emotion behind the entertainment value of Hell or High Water. The subtle commentary toward the banking industry, especially as that relates to familial turmoil, is very poignant in this film. Mackenzie and Sheridan offer many layers that resonate those notions in clever ways that are ultimately potent by the time we get to the film’s big reveal. If you thought this would be a simple thriller, you would be wrong. Hell or High Water is riveting to watch on the surface, but underneath it offers some dramatic ideas that many people will sympathize with by the films end.

Nick Cave and Warren Ellis offers a musical score that exquisitely amplifiels Giles Nuttgens’ blistering cinematography. The music fits this setting well, but more than that, it reaches to the emotional core of this film at the same time. If you ask me, it is one of the best scores I’ve heard all year.

Hell or High Water is a film that has everything. The acting is superb, the direction is on point and the film is both dramatically moving and entertaining as hell. It’s also thematically heavy in all of the right ways. Mackenzie is a forced to be reckoned with and I, for one, cannot wait to see where his career goes after seeing this film.