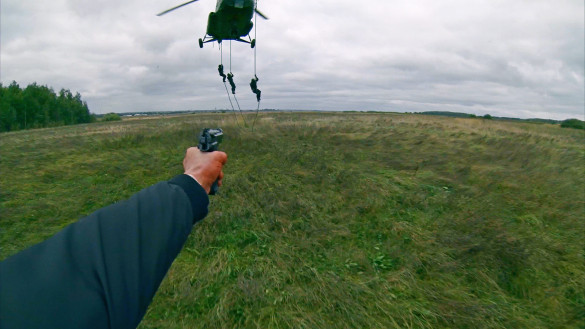 Synopsis: A first-person action film from the eyes of Henry, who’s resurrected from death with no memory. He must discover his identity and save his wife from a warlord with a plan to bio-engineer soldiers.

Let me start out by saying that the ambition of this film is quite affable. Director Ilya Naishuller is trying to attempt something that has never been done before, which is risky and could have had a huge payoff. You have to give credit to Naishuller for bringing something new to a genre that is in dire need of a breath of fresh air.

Now, with that out of the way, Hardcore Henry isn’t a film. There is no story here. It’s a vignette of action sequences that features laughable exposition and characters you don’t know or care about. The story moves at a pace that makes The Program feel like a relaxed stroll in the park. By the time Naishuller gives you the necessary information to piece together this puzzle, it’s too late and half of it doesn’t make any sense. The tonal argument of “it’s just a fun action movie” doesn’t hold any weight either. Hardcore Henry does take itself seriously in parts, while other sections of the film is pure balls-to-the-wall entertainment, making the film tonally all over the place.

In other words, the film has nothing to offer other than nauseating action sequences that wears itself out rather quickly. The whole film is Henry doing this…

Sharlto Copley, however, is kind of a treat here. He plays several iterations of his Jimmy character, which doesn’t make any sense initially, but Copley is hysterical and does add a sense of fun to the film that was desperately needed. The writing of his character, like the rest of the film, is poorly explained but the reveal of what’s really happening with his character is intriguing, mostly for the moral questions that arise from it. Narratively, within the context of the film, it’s nothing special but it does raise questions that will be fun to discuss with your friends regarding the ethics surrounding his dilemma and how you would handle yourself in a similar situation. And stoner Jimmy is absolutely hilarious.

Overall, this would work much better as a series of short films. The raid on Jimmy’s house near the end is quite riveting on it’s own. As a ten-minute action sequence, it’s a lot of fun, dramatic and there’s a full progression for it’s characters, making the conclusion of that particular sequence satisfying and fleshed out. The use of slow-motion is well-timed and the choreography is easily the best of the film. If I saw nothing else but this sequence, I would have walked away happy. The film just doesn’t work as a 90-minute feature length film. The gimmick is tiresome after the first act and ultimately there’s nothing to grasp here dramatically, emotionally or even superficially as a fun action flick.