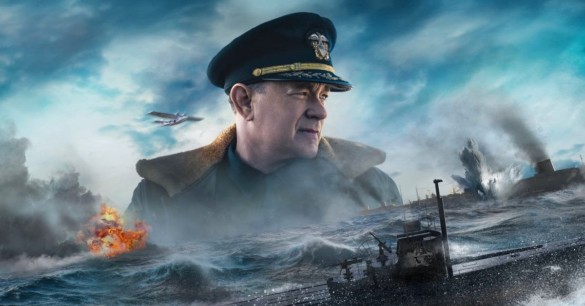 During this strange period of global pandemics, stay at home orders, and a lack of theatrical new releases, there are movies that are going to thrive and some that will not. Greyhound (2020) is unfortunately in that second group for me. War dramas generally need a theatrical release, or an expensive home theater setup, to help convey their grand scale and epic story. This is especially true in cases of “generic” war movies – ones that don’t focus on character development or a specific mission.

Greyhound stars Tom Hanks as Captain Krause, a brand-new Navy captain leading his first convoy of ships across the U-boat riddled Atlantic during WWII. Krause is the only character where we get any background or development. The rest of the cast is nearly identical, young, white males wearing similar uniforms. If I had to name the characters for someone, all I’d be able to say is: Tom Hanks from Polar Express, Elisabeth Shue, guy from Band of Brothers (Stephen Graham), big helmet kid, sonar guy, the cook (Rob Morgan), and a bunch of other similar looking sailors. There is not enough character development or even identification to really bond with any of the characters (save for the name tags on their uniforms). War movies work best (especially for viewers not normally fans of the genre) when they focus on one specific mission or battle- Saving Private Ryan (1998), Kelly’s Heroes (1970), Memphis Belle (1990), or spend a significant time developing the characters- Band of Brothers (2001), The Last of the Mohicans (1992), The Great Escape (1963), Greyhound did neither of those things. Yes, it was about a specific trip across the Atlantic, but it felt four hours long and had a hard time keeping my attention. I am certain that seeing this on the big screen, in a real theater, probably would have changed my mind on this film.

Greyhound isn’t a bad film, but it leaves a little to be desired. It has many positive aspects, such as its visuals and music. It’s also a very pretty movie, although we’d expect nothing less from a director with cinematography experience. Blake Neely’s score was equally spectacular and worthy of an epic war movie. In one scene, there is use of the word “fisticuffs” by Tom Hanks, which of course doesn’t affect the overall movie, but nevertheless I enjoyed it thoroughly. The effects of maneuvering the ships and their tactics versus the U-boats was also interesting. I’m not an expert on WWII era battleships, so I’m unsure of the accuracy, but it was fun to watch. Instead of being based on a “true story” like many of these films, Greyhound is based on the novel “The Good Shepherd” by C.S. Forester but does borrow elements from true events.

Overall, while Greyhound has aspects that are well done, it does lack in its storytelling. It needed a more focused plot and better developed characters. Anyone that is a fan of WWII films, Tom Hanks, or the novel should definitely give this movie a shot, though. It’s currently available exclusively on AppleTV+.