Movie Review: ‘First Cow’ is moo-ving in all the right ways 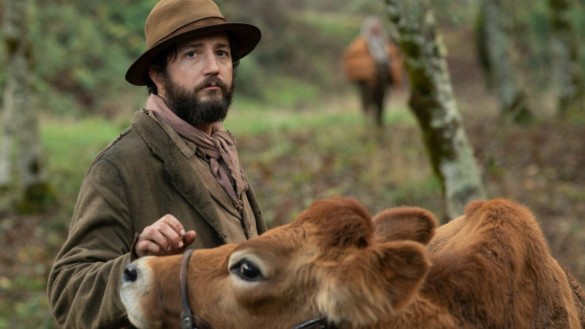 Synopsis: A skilled cook has traveled west and joined a group of fur trappers in Oregon, though he only finds true connection with a Chinese immigrant also seeking his fortune. Soon the two collaborate on a successful business.

All of the main characters in Kelly Reichardt’s latest feature are wanderers, each searching for nothing more than the ability to lead a life of consistent sustenance and some degree of comfort. Whether that character is a cook stuck in a dead-end job with a group of despicable trappers, a Chinese immigrant, or a cow, their end goal is basically the same. And much like the titular cow, First Cow is a film that grazes rather than gorges. In typical Reichardt fashion, it is a story told with great subtlety, slowly revealing the meaning behind its jarring, contemporary opening. It is the director’s most tender film, to date, but don’t let that trick you into thinking there is not Reichardt’s trademark questioning of American institutions. As in her other film revolving around an awesome, sympathetic animal, Wendy and Lucy, the central duo is one that is a bit abnormal, for the time. In Wendy and Lucy, it is a woman and her dog, a partnership destined for heartbreak, and in First Cow it is a Jewish man with a great idea who seems stuck and an immigrant who, if not for incredible willpower and a mind for marketing, is in a position to fail in 19th century America.

Those two men go by the names Cookie and King Lu, and if either of those characters don’t work, the movie fails. Fortunately, John Magaro and Orion Lee give dynamic performances that spark an electric friendship that radiates incredible heat, even as the film burns slow as the molasses that would surely enhance the flavor of one of Cookie’s already delicious oily cakes. These cakes quickly become a delicacy in the Oregon frontier. Only problem is, they require milk, and the only cow around is, you guessed it, the first one to ever set hoof in the territory. Cookie and King Lu befriend the local big-wig, Chief Factor (Toby Jones), who purchased the milk-bearing miracle of the West, making it feasible for Cookie and Lu to sneak onto his property in the night and fleece the dairy required to create a dessert that dominates the local marketplace. In fact, Factor is a frequent customer, and in a marketplace where bartering is implied, he ends up paying a healthy premium.

Simplicity is the name of the game with First Cow, and that simplicity provides a degree of universality and breadth with the themes of the film. As in Meek’s Cutoff, the less defined nature of the American West allows Reichardt to show that the American ideal is deeply rooted in the idea that resources reign and money breeds money. A cow is all Cookie needs to bring happiness to the people around him, but the wealthy man that has infiltrated the town needs to comply to make the venture sustainable. He, of course, is unwilling. Ideas are secondary to the capital, or cattle, required to make them a reality. In addition to his luxurious bovine, he also has multiple Native American servants, again a sign of the capitalistic imperialism begot by the Louisiana Purchase. This idea is planted with the subtlety and nuance we have come to expect from one of the premiere American filmmakers of the 21st century. It works as a tender, surface level story of an unexpected friendship, as well as a condemnation of Western ideals. Reichardt brings a level of precision and control rarely seen in contemporary film.

The film’s cinematography and score are underplayed in all the right ways, reinforcing the melancholy of the story. With the story’s ending established early on, the film operates as a march to the inevitable. It is less about how the story will end than how the story will get there. There are moments of joy, moments of despair, it all feels like real life. First Cow is the story of the everyman entrepreneur. Small business is a rope bridge built in 1492 and the infrastructure has been deteriorating for centuries. The American Dream is attainable, sure, but the large, large majority of participants in the race have a cinder block strapped to their ankle at the starting line. The potential of the “dream” is echoed by those who realized it, whether by skill, chance, or unfair advantage. All of this is told through the lens of baked goods, an achievement in stealthy storytelling.

It is not nearly as dour as it seems, as much of the film revolves around the blossoming friendship between Cookie and King Lu. The real standout in the cast is Orion Lee, who provides a level of charisma and inherent humor necessitated by the film’s pacing and simplicity. In the disaster that is 2020, he gives one of the best performances of the year. The friendship between Cookie and King Lu has a platonic intimacy and purity that is captivating, but the most intimate moments in the film are actually between Cookie and the cow. Cookie sees the cow as a miracle, a necessary participant in his artistic process. He thanks her, caresses her, and confides in her, all out of the earshot of his newfound best friend and business partner. It is all a ruse, though, and the economic realities rear their ugly head. Gone is the partnership between man and nature. Gone is the potential for culinary progress. Gone is the joy brought to the patrons yearning for more oily cakes. The economic realities of the West catch up with them. Their dreams are dashed.

With First Cow, Kelly Reichardt reinforces her status as one of our greatest artists with, perhaps, her greatest work. It is a blend of themes she has explored before: the male bonding of Old Joy, humanity’s relationship to (and dependence on) animal companions in Wendy and Lucy, the desolation of the American West in Meek’s Cutoff, and the general yearning for human connection of Certain Women, but it feels like a culmination of those themes, rather than a retread on ground that she already covered. All of the period elements are realized immaculately and the performances are, across the board, electric. Its patience, sense of purpose, and gentleness may not be for everyone, but it is an absolute feast for Kelly Reichardt fans.