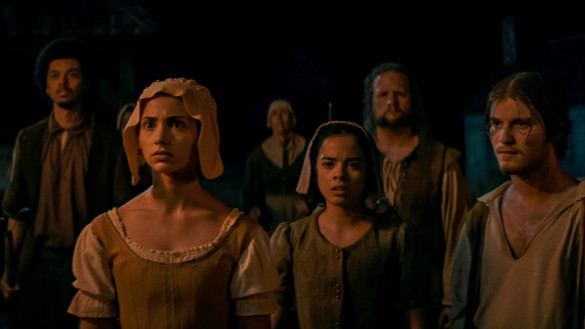 Synopsis: The origins of Sarah Fier’s curse are finally revealed as history comes full circle on a night that changes the lives of Shadysiders forever.

If there’s one thing Fear Street Part Three: 1666 has going for it, it’s the original idea of what the third installment of a trilogy can be. I was enamored at the beginning with the unique concept of taking the core actors from the first two installments and casting them in new roles that help build upon the main legend of the story and bring the larger narrative to a close. It’s something I’m not sure has ever been done before, and it’s hard to say that about any movies these days. And I will admit this—if you’ve been a big fan of the first two Fear Street movies, you’ll likely be satisfied with this final chapter, especially with the epic finale the second half gives you.

Unfortunately, most of my compliments end there because no matter how much I wanted to love this trilogy—R.L. Stine’s Fear Street books were my jam in my later years of elementary school—most of the thrills, chills, and magic of Stine’s series were allotted to the solid first installment set in 1994, only to be seen in bits and pieces in the 1978-set sequel and now almost nonexistent in this 1666-set closer, especially in the lugubrious first hour. There’s a tremendous sense of fun in Part One, with fast and suspenseful pacing throughout, and by Part Three, the story has turned so grim and slow, the entertaining spirit of Stine’s work has been drained away completely.

As the title suggests, the events take place in 1666, with Deena (Kiana Madeira) now inhabiting Sarah Fier’s body in a settlement that would centuries later become the ill-fated city of Shadyside. Ashley Zukerman is back as Solomon Goode, an ancestor of his eventual 1994 character of Nick Goode, and the terrific LGBTQ storyline from the first movie is back in full force here, with Olivia Scott Welch back again now playing the seventeenth-century Hannah Miller. There’s your standard hysterical witch-hunt by many paranoid members of the settlement that puts some of the most innocent of characters in danger, and the leads we’ve been following from the first movie have to work together to put an end to the curse.

There’s almost nothing scary or compelling about the first half of Part Three, with only the romantic moments between the two female leads showing signs of life, the remarkable love story that played out in Part One getting more screen-time here than it did in Part Two. Director and co-writer Leigh Janiak captures a nice sense of place, one that certainly gives off vibes of Robert Eggers’ The Witch, but unlike that deliberately slow-paced film which was filled with constant dread and terror, she’s left with little to do in this movie but get us quickly to the action-packed conclusion that feels entirely separate from everything that comes before. Like my criticism of Part Two, lots of Part Three feels like an overlong flashback rather than a new, exciting story, which the second half of this film ultimately confirms.

Now, to avoid major spoilers, all I’m going to say is there’s a major shift in 1666’s story at the hour-mark that works to bring the complex, three-movie, multiple-character narrative to a close. It’s certainly the final half-hour that works the best, all the loose ends being tied up, but the structure and tone of Fear Street Part Three: 1666 are so all over the place it’s almost hard to think of it as a complete movie. More important, by the end of these six hours of storytelling, I no longer cared about who the killer was or how he or she might get away with. All I cared about by this point was the conclusion to Deena and Samantha’s love story, which does have quite the memorable final scene if you care to stick it out to the very end.

The best part of the trilogy for me was the opening scene of Part One, with Maya Hawke playing the first victim. I loved everything about that scene—the music, the style, the colors, Hawke’s believable performance. It felt like Fear Street, it felt like Stranger Things, it felt like Scream, it felt like horror! It was the beginning of so much promise and anticipation, but aside from the occasional inspired moments in the rest of the trilogy—and the well-crafted, emotional love story between Deena and Samantha—little came close to the power of those opening minutes, and by this third movie, the all-essential horror aspect has almost been forgotten until the too-late, too-little blood-soaked finale.

In the end, I believe this trilogy was too big and too epic, with too many characters to get us to care. It was a cool idea to make three two-hour horror movies each heavily connected to the next, but a single tightly constructed film might have been the better call, with a shortened version of Part One, a condensed second hour of Part Three, and a few scattered flashbacks in the middle.