Movie Review: ‘Pig’ is an Unexpected but Welcome Surprise, and Cage’s Best Work in Decades 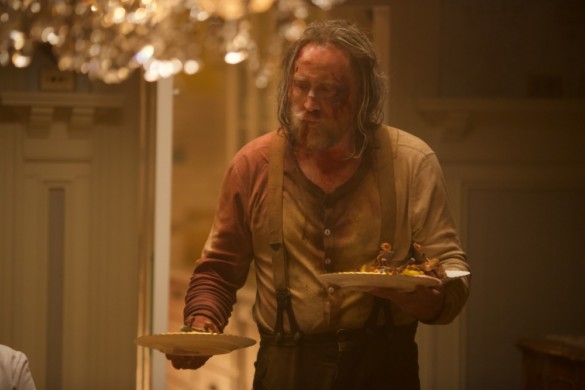 Synopsis: A truffle hunter who lives alone in the Oregonian wilderness must return to his part in Portland in search of his beloved foraging pig after she is kidnapped.

Nicolas Cage’s career may have gone through a bit of a tumultuous time as of recently, but his turn to indie flicks has proven that he’s still the powerhouse actor that he was once known for. Filled with successful dramas of the ’80s and ’90s, and action flicks of the 2000s, Cage is incredibly versatile in skill, and always adapting to what’s fresh, or what may be necessary. Cage is definitely an acquired taste, and although he may be bitter to some, like a fine wine he has only aged gracefully with time.

My first interaction with Nicolas Cage was at a young age when I saw him in National Treasure, although he wouldn’t come into my attention again until his voice over role as Spider-Man Noir in 2018’s Spider-Man: Into the Spider-Verse. Having not seen most of his critically acclaimed roles until recently, Cage has mostly lived in my memory as the man who was going to steal the Declaration of Independence or the fun caricature who effortlessly fits into an ensemble cast so perfectly.

On the surface, Pig seems like a John Wick rip-off, and based on the trailer that appears to also be how the film wants to present itself. In actuality, it’s one of the most nuanced and subdued films I’ve seen all year, taking its time with its story and allowing the audience to approach it from any aspect. While it might be too slow for some, and its conclusion may not be satisfying for similar groups, Pig kept my interest the entire 92-minute runtime and left me with endless thoughts of what the characters experienced for hours afterwards.

We initially see Rob (Cage) living a humble life as a truffle hunter with his pig in the Oregon forest. Cage fully embraces the subtlety and simplicity of the life Rob has chosen, already drawing the viewers full attention in normal daily activities. After his beloved companion is kidnapped, you’d expect the action to ramp up a little bit, but instead the film builds suspense by remaining faithful to a more nuanced approach that we first experienced in the first ten minutes of the film. Cage really leans into these moments of intensity behind his character, boldly allowing himself to be vulnerable underneath his tough exterior. Rob enlists the help of Amir (Alex Wolff), a young entrepreneur who purchases Rob’s truffles to resell to local restaurants, to assist him with finding his Pig. Although the interactions between the two are initially reluctant and only taking place out of self-interest, the connection between the two allows itself to slowly grow, blooming into an unexpected companionship that’s both comforting and heartbreaking to watch take place before us.

Rather than the approach we’ve seen before in both John Wick or even Taken, using physical action to try to recover something that has been lost, Pig forces us to look inward and consider what’s truly important to these characters, and by proxy us as an audience. Rob uses personal connections that he has retained with people, even after 10 years spent in the wilderness, to try to get those around him to help him. Every scene Cage shares with someone feels so deeply personal and emotional, it’s hard not to get invested even when the characters are just looking at each other, communicating on a much deeper level that is palpable from the screen. Cage’s performance especially intensifies the raw exposure and openness, taking a subtle and nuanced approach that’s some of his quietest work in perhaps decades, but also some of his best since his last career surge in almost 20 years.

The film covers a multitude of ideas and themes, all of which to discuss would feel as if they’re spoiling the film. I was constantly thinking about the deeper ideas behind the simple plot that was taking place in front of me, and it left me truly speechless after leaving the theater. I’m sure the conclusions that I come to and what I think is being said are completely different from another viewer who has had different life experiences than me, and it’s the simple notion that so much can be conveyed through such little dialogue that I think truly makes this film the thrilling and rewarding experience that it is.

Pig is an incredibly unexpected but welcome surprise, and it will take you in directions that are unpredictable in the best of ways. Cage’s performance anchors the film and connects to the audience by daring them to consider the same questions his character poses to others.