Movie Review: ‘Space Jam: A New Legacy’ Is A Mixed Bag Of Nostalgia 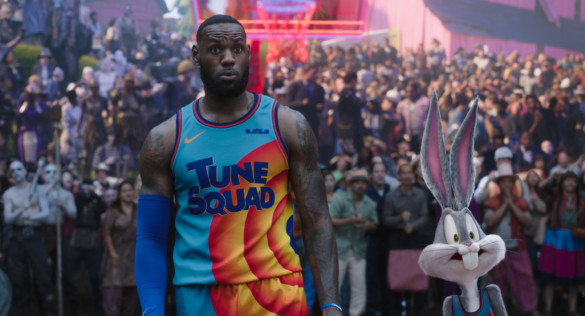 Synopsis: A rogue artificial intelligence kidnaps the son of famed basketball player LeBron James, who then has to work with Bugs Bunny to win a basketball game.

Reboots and revivals, and have been a cosmic market for the entertainment industry. As of late and consumers have been reluctant to consume media that has shaped their lives as a child. There are countless sequels in the works such as Escape Room 2, Ghostbusters Afterlife, and Top Gun Maverick. Some sequels exceed people’s notions like Mad Max: Fury Road. And then there are sequels to films that fall short of the viewers’ expectations for instance Space Jam: A New Legacy.

People always used to talk about how exciting it would be for Warner Bros. to construct a new Space Jam movie for the latest generation of basketball fans. And how amazing would it have been for the franchise now that CGI technology has come a long way since the original installment released in 1997? I remember how fans would throw out names like the late Kobe Bryant or Stephen Curry to be the star of the next Space Jam installment. But as time passed I think it was inevitable that Lebron James would take Michael Jordan’s place as the next face of Space Jam.

This film created an assortment of reflexes on my end. One on hand, I thought the sequel had a greater sense of structure to the plot and attempted to have the audience feel something for Lebron’s family and the Looney Tune gang. On the other hand, I thought most of the human characters in the film lacked enthusiasm and gave fixed performances.

Lebron James was stiff as a board, and it felt like his role was given little to no direction as the movie progressed. His line delivery felt mechanic and it took me out of the film multiple times. Don Cheadle seemed to be having a blast with his role as AI. G Rythm. He took the character and ran with it. His character was one-dimensional but the way he interacted with the rest of the cast was pure entertainment and was the classic antagonist that I was expecting out of this movie.

This review would mean nothing without the main draw to film, the Looney Tunes themselves. They were the best part of this journey. The Draft Day scene was the most enjoyable part for me. I adored how the server verse was compiled of various Warner Bros. properties. And how each franchise had its world within the database. It was clever how they handled the crossover references, lines, and characters into the story. It almost felt like a celebration of Warner Bros. properties and how far they’ve come as a company. One minor setback is that I felt like this film was too long. I understand they wanted to reach that 2-hour runtime but this would have been more enjoyable if it was around the hour thirty maybe hour 45 mark. There was too much time wasted in the beginning before we arrived in the server verse.

The 2D animation looked phenomenal and being a 90’s kid, I felt right at home. I admire that they went the extra mile to create a cartoon version of Lebron. The time spent in the 2D toon world felt natural to the point where I wish the entire film was 2D animation. Unfortunately, the 3D animation could have used more polish to the final product. At first glance, the tune and toon squads seemed to have a wax-like texture to them and looked semi-animatronic. After a while, you do get used to the 3D look but it’s not a rewarding experience.

Space Jam: A New Legacy is a mixed bag of emotions I always enjoy seeing the looney tunes in their natural environment but the human characters are bland for the most part. The movie was a great ride but just because it’s labeled as a kid’s film doesn’t excuse it from being subpar.