Movie Review: ‘A Night of Horror: Nightmare Radio’ is a Muddled But Occasionally Creepy Anthology of Short Films 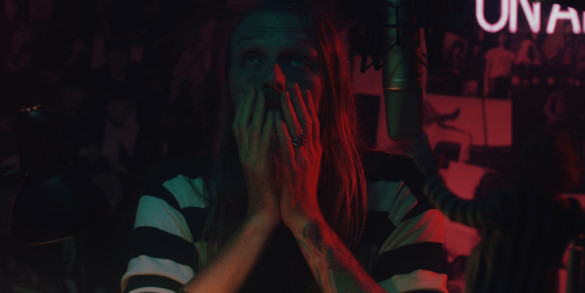 Synopsis: Rod, radio DJ, hosts a popular horror-themed show packed with tales of terror for eager listeners. When he receives alarming calls from a horrified child things start to feel off.

A horror anthology of short films dropping at Christmas might initially seem like it’s missed the boat, but there has always been a strange invisible thread between festive seasons and nightmares. In the classic anthology Tales from the Crypt, the best is the Joan Collins’ home invasion Santa Claus thriller ‘And All Through the House’. It hits all the right notes of a short story, from its dynamic, flawed protagonist to the constant threat of an approaching enemy – with Christmas jingles contrasted delicately in the background. There’s no Christmas film in A Night of Horror: Nightmare Radio, but for the most part, they follow the effective formula laid out above. None are quite as good as Joan Collins bludgeoning her husband to death, but with nine stylistically different short films – including the titular radio show which doubles as an excuse to mash all of these short films together – horror fans are going to find something they like from shadowy monsters and dead children to vengeful mermaids and psychotic killers.

The collection has been curated by Nicolas Onetti and Luciano Onetti, with some of the shorts already available online. As such, it’s a film more directed towards those unfamiliar with the form rather than somebody who actively seeks them out. I hadn’t seen any of the films, so most were a sickly treat. They don’t all stick, and neither do they complement each other to create an overarching theme or idea – and this is by far the most uninspired aspect. But a lucky benefit of anthologies – and what makes them very easy to sit through – is that none of the films run long enough to offend or bore you to the point of quitting. Despite a few misses, I had a good time with Nightmare Radio which, when good, fulfills the promise of short, sharp scares.

None are sharper than Oliver Park’s playfully tense “Vicious”, which uses light and darkness to efficient effect as a woman grieves her sister’s death. It’s The Babadook And Lights Out funneled into ten minutes of home invasion menace, finding impressive time to dabble with a few perspective shifts along the way. It is bettered by the unnerving, surprisingly humane ‘Disappearance of Willie Bingham’, a Kafkaesque tale of dystopian torture and experimental punishment clearly wearing ‘In the Penal Colony’ on its surgically removed sleeve. The brevity of the horrible images and sharp commentary only heightened by the minimalist design of a short film, there is no time to blink between the removal of the one arm and then a left leg. It’s solid, nasty stuff, made compelling because it doesn’t abandon the humanity of the victims caught in a cycle of pain. It asks the question of how far punishment should go in response to a terrible crime, before blurring into something more troubling, and suggestively to the horizon of our approaching future. The best horror shines a light on the darkness of everyday terror — and like Willie, our eyes are kept wide open, fully awake to the nightmare. The Spanish language “Gotas” is another standout, a genuinely threatening tale of abuse and possession, with a terrifying monster at its black heart.

As with any anthology, there are a few duds that muddy the experience. The film, disappointingly, opens with one of its dullest shorts, “In the Dark, Dark Woods”, an arty and wasted fairy-tale absent of dialogue and tension, severely weakened by a lack of purpose that shackles the entire anthology. It’s forgotten as soon as it ends, assisted by the arrival of “Post Mortem Mary”, which is an immediate improvement, tethered to every ghost trick in the book yet executed with great sound design, making every use of the squeamish physicality of its creepy child corpse. This is then followed up by the worst of the lot “A Little Off the Top”, an Eli Roth inspired bore-fest of nauseating torture-porn, which tries to escape its lack of ideas by ending with a joke, only to flatten the film completely because of how childish it is. A night of horror indeed, horribly bad. And with these three wildly different films – in style and quality – you get an idea of how smashed together Nightmare Radio appears as an anthology of horror.

As the glue between the different short films, Rod Wilson’s (James Wright) centerpiece radio show fulfills its purpose but isn’t nearly as interesting as the stories it’s telling. Despite this, there is charm to be found here with the stormy backdrop, Wilson’s goofy back and forth with his deranged late-night listeners, and the aesthetic nostalgia of a radio show telling horror stories at night. I also liked these interludes as a pallet cleanser before the next short, resetting the tension, which is crucial for horror to work. But the weakness of Wilson’s central segment ultimately works against the short films surrounding it, and its predictable twist is comically silly. In its attempts to bind everything together, the poor writing and clunky design only widen the gulf of consistency and heighten the overall lack of narrative control. Every time we went back to Wilson, I was thinking about whatever was rolling next. This, I suppose, is a good sign where the short films are concerned. Most entertained, a couple stayed with me until morning, some I can barely remember. Coming to digital download 21st December, Nightmare Radio is a box of Halloween treats, but in this instance, there’s no guarantee.