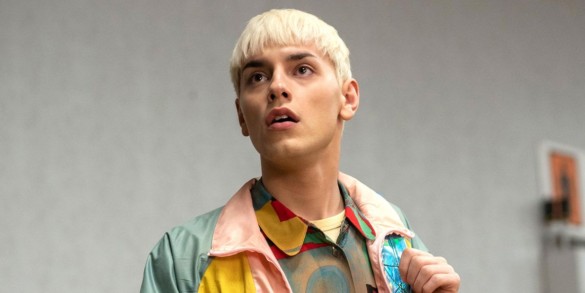 Synopsis: Feature film adaptation of the musical about a teenager from Sheffield, England who wants to be a drag queen.

Musicals are melodramatic, campy, fantasies full of bright colors and drama with a capital D. So, why are there so few ones about and starring LGBTQ+ people? Thankfully, in this year of many movie musicals, we’re treated to a fabulous gay one. Everybody’s Talking About Jamie is not the typical coming out story, though it mirrors that idea in many ways. Jamie is gay. Everyone in town knows Jamie is gay. Yet, Jamie is also yearning to be a drag queen, which is more complicated.

Screenwriter Tom MacRae deftly handles the complicated nature of gender identity as it pertains to a gay man who does drag. As Jamie explains, he’s “a boy who likes to dress up like a girl sometimes.” MacRae finds those moments to give details without it being overly explanatory, usually handling it within a conversation between Jamie and one of his confidants. It’s a deft handling of a complicated identity.

The more somber musical numbers are also handled deftly. Director Jonathan Butterell and editor Mark Everson cut them without the traditional montage, but a flashback or a simultaneous scene. His song takes on a grander meaning as Hugo tells tales of fighting the Iron Lady’s rule and losing friends and lovers in the AIDS epidemic. It’s followed by Priti singing of Jamie’s beauty matched with a flashback of when he first tried on his mother’s wedding dress. Then as Margaret sings about needing Jamie because he’s her boy, we see him in a downward spiral, inflicting punishment on himself after confronting his mother about his father’s abandonment.

This scene is especially affecting because of Sarah Lancashire’s indomitable performance. She plays a mother without doubt. She supports, cares for, and loves Jamie regardless of who Jamie is or will become. She is the quintessential momma bear, fighting tooth and nail for Jamie and his happiness, sacrificing her own. Lancashire bares her soul and does it with a stoic, steadfast grace for the unsung hero that is Margaret.

What Everybody’s Talking About Jamie lacks is actual drag. This caused the film to, well, drag. The actual time we see people performing in drag is minimal. We needed far more of Richard E. Grant as Loco Chanelle, a performance or makeup tutorial, something. The queens at the showcase barely get into their outfits, just half made up and half-clothed. Even the one fantasy sequence in a drag club whizzes by so fast that the looks are lost in the crowd of dancers. Yes, the film is based on a stage musical, which is based on a true story, but the film allows for more. The filmmakers should have taken advantage of their larger budget and done more deference to the glory of the art form of drag.

Though, in spite of this, Everybody’s Talking About Jamie is full of joy, heartbreak, laughter, and a strong nod to the performers and activists in the fight for LGBTQ+ rights. There are some who disdain musicals and what musicals evoke, but musicals are about the joy of self-expression. Everybody’s Talking About Jamie has a joy and life within it that will make you hum the catchy tunes and want to call your mom.