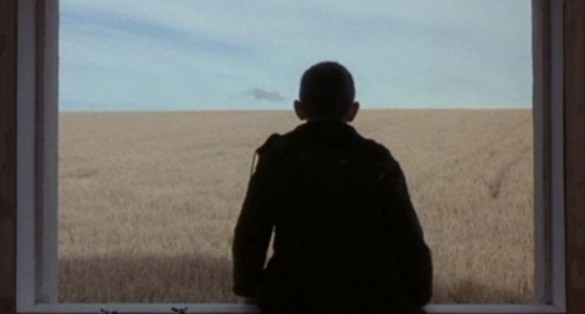 Five pieces of individual works are making their way from Criterion onto our DVD/Blu-Ray players. Coming from different periods in the story of cinema, this month is another doozy of wonderful, worthy films to be seen and bought. Two Hollywood films, one with arguably American cinema’s greatest on-screen performer and the other a sci-fi classic, another gem by India’s ultimate auteur, a Japanese fable on greed, lust, and demons, and the breakthrough film about a dark, dirty side of Scotland that opened the doors for one of cinema’s most respected filmmakers today. Here is the quintuple of films for the month.

At the beginning of the film noir era, Humphrey Bogart and Ida Lupino star as a criminal and outsider, respectively, on the run after the criminal takes part in a robbery and she is brought along for the ride. Bogart became a top-billing star from hereon as his nest film, The Maltese Falcon, was released later that year. Both Falcon and this film were written by John Huston, who would form a long-lasting partnership with Bogart over the next two decades. It was also a smash for director Raoul Walsh, still in the middle of a lengthy career going all the way back to the silent era with another twenty years left.

Based on Richard Matheson’s sci-fi novel, a man is suddenly covered by fog and slowly begins to shrink from an adult to an insect with no cure for stopping or reversing it. Director Jack Arnold makes this terrifying concept of being literally reduced to ants and constructs an existential symbolism of being too small in a world growing by the day during the 1950s. It feels a lot like other horror films with incredible special effects, but this was a B-picture essentially in cost which made the film even more profitable and added to Universal Pictures’ success with the genre dating back to the 1920s.

India’s master Satyajit Ray, who would’ve been 100 years old this past May, tells the story of a landowner who begins to believe that his daughter-in-law is a reincarnated goddess who can help people with anything but takes a deeply obsessive route leading to tragedy. It is India’s ultimate auteur creating another amazing fable full of spirituality and looks inside of the country’s close relationship to Hinduism, maybe too close as he feared the film would be censored because of the mockery of its superstitions. For Ray, it was another chapter to his ingenious, one that American directors William Wyler and Elia Kazan called out as favorites of Ray’s.

In fourteenth-century Japan, a mother and daughter-in-law kill samurai serving in a civil and sell their stuff to survive, only for a surviving neighbor to come into the picture and the evil demons from the murdered samurai sweep in to curse them all. Kaneto Shindo described people in general as being, “both the devil and God and are truly mysterious,” making Onibaba continuously fitting within his lengthy resume during his career, including 230-plus screenwriting credits and 48 directed films over a sixty-year span alongside his contemporaries Akira Kurosawa and Kon Ichikawa.

The only reissue from this list was Lynne Ramsey’s debut feature and it packed the punch of her gritty style of down-and-out settings. Set in 1970s Scotland in housing development, a young boy named James struggles to come to terms with an accident that killed his friend as his family is being moved. The old buildings are filthy, rats are everywhere, and regardless of the new settings, James realizes he is a prisoner of his own neighborhood. Alcoholism and gangs are the wardens of this area and young men like James are bound to fall into the large mud pit of social failure.