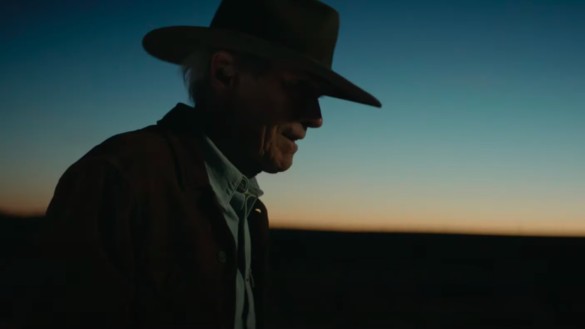 Synopsis: A one-time rodeo star and washed-up horse breeder takes a job to bring a man’s young son home and away from his alcoholic mom. On their journey, the horseman finds redemption by teaching the boy what it means to be a good man.

2021 marks not only Clint Eastwood’s thirty-ninth feature film as director but also the fiftieth anniversary of Eastwood’s very first feature as director—the terrific 1971 thriller Play Misty for Me, starring Eastwood and the late Jessica Walter in a dazzling performance. There have certainly been highs and lows in his long career as a director, but the good films absolutely outweigh the bad, and although his latest effort Cry Macho isn’t in the same league of some of his best films like Unforgiven, Mystic River, and Million Dollar Baby, it’s a noble film with compelling relationships and an impressive efficiency that keeps the viewer engaged.

If there’s any section of the film that doesn’t work well, it’s the opening few minutes, where the screenplay awkwardly shoves in the needed exposition to get the plot in motion. Set mostly in 1980, Dwight Yoakum, sadly underutilized, plays Howard, the ex-boss of Mike Milo (Eastwood) who desperately needs a favor. He goes to Mike to ask if he would be willing to travel down to Mexico to retrieve his thirteen-year-old son Rafo (Eduardo Minett) from the boy’s alcoholic mother and bring him back to Texas. At first, Mike treats the mission as a simple job, nothing more, but soon he takes to the boy and finds himself going through an emotional journey of his own as he becomes a momentary father figure to someone who needs his care and guidance.

If you’re looking for something groundbreaking from the ninety-one-year-old Eastwood this time around, you won’t find it in Cry Macho, which plays on many ideas and themes he’s visited before in his work, like the road trip narrative, and being a mentor, and evading the police by any means necessary. You can look at the movie cynically as a Greatest Hits compilation of some other better works he’s made in the past, but if you give yourself over to the story, this is a solid and at times riveting piece of filmmaking, with lush cinematography by Ben Davis, tender music by Mark Manina, and a fairly tight screenplay by Nick Schenk and N. Richard Nash, the latter of whom wrote the original novel, wrote his version of the script in the 1970s and died in 2000.

Yes, this project has been in the works not for many years but for many decades, Eastwood first being approached about making it in the late 1980s. The film almost happened with Roy Scheider in the 1990s and Arnold Schwarzenegger in the 2010s, but it wasn’t until Eastwood felt he was the right age for the lead role that he finally put the project into motion. This is a role that fits Eastwood like a glove from minute one, a one-time rodeo star who broke his back and lost his wife and child in a sudden car accident, and who has for a long time been sleepwalking through the remaining years of his life. He plays the Greatest Hits as an actor too, being cranky, kissing a pretty lady, and punching a man in the nose. (I’m not sure how many ninety-one-year-olds we would accept as being able to swing a violent punch, but Eastwood pulls it off!)

Again, something feels off about the opening—we actually start with a scene between Eastwood and Yoakum in 1979, only to cut quickly to another scene with the two men in 1980—but once Mike begins his quest to retrieve Rafo, the film draws you in and keeps you invested, especially once Rafo and Mike and a rooster named Macho band together to get to Texas. I found Minett to be a good young actor, occasionally stiff at times in his line readings, sure, but a charismatic personality always coming through. And Natalia Traven is totally winning as Marta, the Mexican woman who takes in Mike and Rafo, and whom Mike ultimately falls for.

The parts of the film that fall flat usually have to do with moments where the tension is dramatically and unnecessarily increased, like an over-the-top scene in the house of Rafo’s mother where you wonder if Mike is going to make it out alive, or like when the villain’s car smashes into Mike’s and the only way out of the predicament is through a wildly unbelievable moment of sheer dumb luck. Some of the comedy with the rooster Macho gives the film needed levity and energy, but other parts of the humor feel forced, particularly the last sound we hear before the film comes to a close.

The tone of Cry Macho is at its best when it’s silent and thoughtful, not ramped up into an action movie. There are so many lovely scenes played out that reveal the various layers of these characters. Eastwood’s best scene takes place in a church, his face covered in darkness, as he chokes up with tears, telling Rafo about the wife and son he lost many decades ago. The movie takes its time and I liked it for that, with Rafo learning how to ride horses, and a proud Mike looking on, the golden hour light reflecting against the peaceful smile on his face. And when some moments of quieter tension arise, like when two Mexican cops pull Mike over on a winding dirt road, we feel worried for Mike and Rafo and if they’ll be able to make it to their destination.

I hope Clint Eastwood has another five films in him, but if Cry Macho does turn out to be his last feature film as actor and/or as director, I found it to be an entertaining, if flawed, swan song to a truly stunning career. There are few film directors who stay active in their profession for fifty years, and even fewer who continually make good films decade after decade. The filmmaker who always enters my mind when it comes to directing two great movies fifty years apart is Sidney Lumet, who directed 12 Angry Men in 1957 (his first film) and Before the Devil Knows You’re Dead in 2007 (his last film). Whether Eastwood continues to make movies or not, his incredible legacy and contribution to cinema has been intact for a long while, and his latest effort is yet another worthwhile film to be added to his impressive canon of work.