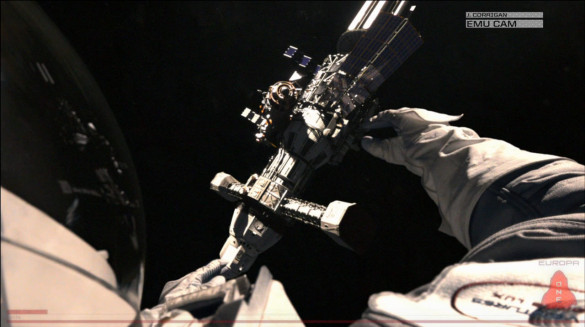 Synopsis: An international crew of astronauts undertakes a privately funded mission to search for life on Jupiter’s fourth largest moon.

DIRECTION
Sebastián Cordero does a pretty good job here with an interesting and realistic approach to space exploration in the sci-fi realm. This movie is really more of a pseudo sci-fi film and while it has it’s science fiction elements, it has a lot of real science it it. When trying to make this film, they wanted to make as close to a real science movie as possible and Cordero did a really great job for the most part. It’s all found footage and that element is explored really well giving you more sense of realism throughout the film. The camera work includes video testimonials, interview style, from within the space craft as well as interview’s with a few people from the private corporation back on Earth who helped fund and oversee the project. There are also several camera’s throughout the space craft that also captures the drama that unfolds and it’s comes together well organized and natural. The shots of space and the planets as the astronauts are on their journey are great and give a really fun aesthetic. Overall, Cordero does a great job of exploring the science, keeping it pretty close to real life and giving us an experience of what it may be like to get to Europa.

SCRIPT
The story centers around a privately funded mission to one of Jupiter’s moon’s, Europa, which would carry a group of strong international astronauts. In real life, Europa was found to have ice and water on it’s surface and wherever we find water on Earth, we find life. Many scientists have questioned and wondered if there would actually be life there given the facts of how things work on Earth and this film explores that possibility in an interesting and realistic way. While the actors aren’t A-listers, the characters here are actually pretty interesting, scientific and engaging for the most part, especially for a small project like this. You find yourself caring for them and you start to wonder what it would be like to explore the universe and if it’s possible to find life elsewhere. While it gets a little cheesy and more sic-fi toward the end, it’s still a fun and dramatic way to see what it may be like. For what this movie is and the way it’s captured, it’s not too bad.

PERFORMANCES
The performances aren’t going to win Oscars by any means, but again, for what this movie is, it’s pretty good. Most of these actors are relatively unknown which elevates the realism even more since in real life we (the common people) most likely wouldn’t know the real-life astronauts either. However, these actors pull of astronaut really well and do a great job. Sharlto Copely, who may be Michael Bay’s long lost twin, is the stand out and does a really great job. He was amazing in District 9 and is easily the best one here as well. He’s funny and charismatic and his character becomes the one you care about the most. Dan Fogler, who’s a really underrated actor, stood out here too. While is character isn’t on screen as much, he comes of incredibly believable as a doctor who helped oversee and manage the project from Earth. The rest of the performances were good too and while they weren’t necessarily stand outs, they did what their roles required.

SCORE
Bear McCreary, who is a pretty good composer, has a great score here which was fun and added a nice touch to the movie. His score elements were digital and appropriate given the science-y aesthetic we have here. However, several tones and melodies sounded very similar to Paul Leonard-Morgan’s score for Dredd, which was a little distracting and felt like taking an easy way out on some levels. It’s still a good score but a few points taken away for stealing.