Movie Review: ‘Don’t Look Up’ is a Brilliant Pandemic Political and Social Commentary 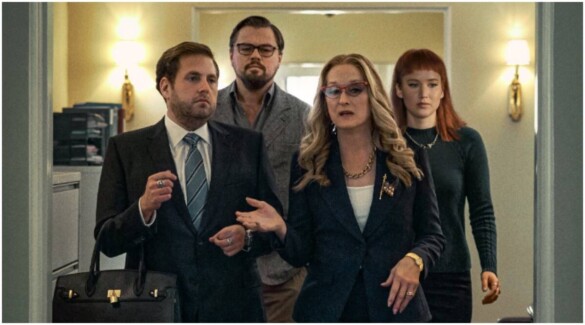 Synopsis: Two low-level astronomers must go on a giant media tour to warn mankind of an approaching comet that will destroy the planet Earth.

While Adam McKay has a very distinct style to the films he creates, unlike some other notable filmmakers such as Quentin Tarintino or Martin Scorsese, McKay’s films have received incredibly mixed reviews. Focusing often on political satire, McKay goes to the extreme to accentuate the problems he chooses to focus on. After his last two films, The Big Short and Vice, focused on previous real events, he changed his approach to fiction for Don’t Look Up. Despite this alteration, it stays true to his satirical nature and especially to his critique on current culture, politics, and society.

Don’t Look Up focuses on Dr. Randall Mindy and Kate Dibiasky (Leonardo DiCaprio and Jennifer Lawrence), two scientists and professionals in their industry, who discover an asteroid headed towards Earth that has the power to destroy all life on the planet. The film follows their struggles, starting with trying to alert the President of the United states, played by Meryl Streep, who only tries to downplay the events fearing that it might interfere with her upcoming election. Despite how desperately Randall and Kate try to point out that an election won’t matter if an asteroid hits the earth and kills everyone, politics and personal power trump the individual lives of billions of people. After failing to convince the President, DiCaprio and Lawrence try to take their news to the media, hoping to alert the public and push for a change. They’re further thwarted when they’re not seen as “media ready” and their story fails to gain traction or headlines. Also working against them is the Mark Zuckerberg/Jeff Bezos/Elon Musk-esque billionaire Jason Isherwell (Mark Rylance) who sees the asteroid as potential to harvest the minerals it’s made out of for monetary gain. With his power and influence, he pushes his narrative as to why the asteroid is good for everyone and uses his political influence to manipulate the American people.

Yes, this is a Covid movie, but unlike other Covid movies we’ve seen within the past year that have often failed, such as Songbird and Locked Down, Don’t Look Up takes a more metaphorical approach. The thematic use of an apocalyptic asteroid easily draws in the audience and the desire to forget about the pandemic is achieved while wrapped up in the chaotic world that McKay creates. At its core, Don’t Look Up is a story about a potential humanity-ending event that media and politicians become divided on despite the distinct proof of its existence. It’s easy to begin to compare to the real world pandemic we’re experiencing, and the critique McKay is trying to make are incredibly poignant.

Among some of McKay’s filmmaking trademarks are his often large ensemble casts along with his frantic and  chaotic editing, both of which are utilized perfectly in Don’t Look Up. The entire cast shines in this film and no one fades into the background. The large names thrown into the cast are all stellar in their respective roles, but Meryl Streep is especially amazing in her Trump-parallel presidential role. The editing can jump around a bit and while it might be too jarring for some, it shows how fast-paced and cut-throat the world we live in is now. At the end of the day, it also does an amazing job at displaying the sheer humanity behind the film, and how interconnected we all are despite our disagreements or differences. If we are unable to come together to stop the end of the world, there truly is nothing that can bring humanity together.

While his filmmaking might be too much to handle for some, McKay’s fictional events in Don’t Look Up are incredibly relevant to what the United States is going through today in the pandemic, and he’s able to exhibit a level of humanity that’s incredibly touching and relatable to audiences. It’s a must see on Netflix for this holiday season that will have you thinking about the social commentary involved, but not too stressed due to the extreme comedy.