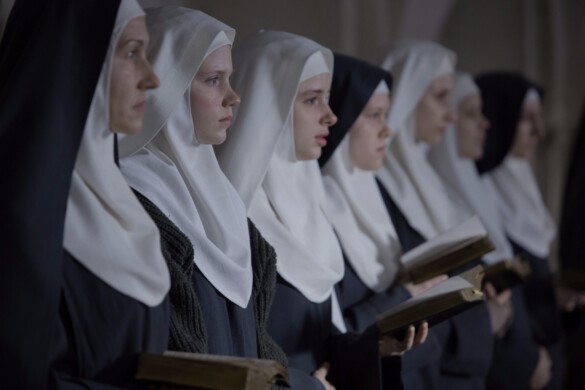 Films can be a lesson on thematic flexibility. Many films may have the same theme, but completely different ways of arriving at said theme and expressing it. Parenthood, in general, and motherhood, in particular, is certainly a common theme of many art forms, film included. On The Criterion Channel alone, one can find a vast array of experiences and stylistic choices in films about motherhood. One such is sadly leaving the service at the end of this month, in The Innocents, also known as Agnus Dei, directed by Anne Fontaine.

In short, The Innocents is the story of a young French female medical doctoral student, Mathilde Beaulieu (Lou de Laâge), who is approached by a nun, Sister Teresa (Eliza Rycembel). She is tasked with helping some of the sisters who are ill. It is later revealed that several of the sisters are in late stages of pregnancy after being raped by Russian soldiers. Fontaine as a director does a tremendous job of showing the horror of this betrayal without engaging in gore or sexual exploitation. Among many other things, The Innocents is also an exploration into shame and the limitations of faith.

There are, of course, many maternal figures in this film given the constant pregnancy and birth scenes. But, one focus is on a mother figure who is literally named Mother Superior (Agata Kulesza). As is likely known to most readers, she is the authority in the convent. She guides these women and attempts to hide the secret shame of pregnancy. Despite the existence of actual rapists in the film, Mother Superior may be the most disturbed character we gain access to in The Innocents. Although her heart may be in the right place, she shows time and time again how misguided faith has made her, and, by connection, how unworthy she is of the title of Mother.

Mother Superior is introduced as a barrier, not only to Mathilde, but to literal life saving medical care. She believes strongly that not only should no one know about this shame, but no one should touch these nuns. Later, she commits a greater sin by lying to the mothers who have given birth. She lies by telling them that the children have good homes when, in reality, she has simply been abandoning the newborns under a cross, trusting again to faith. Fontaine’s direction really takes flight when this realization occurs. There is no major confrontation, but she accomplishes in silence what many directors could not accomplish with pages upon pages of trite dialogue.

Speaking of that direction, Fontaine also makes incredibly smart decisions in her reveal of the many members of the convent. As is expected, many of them look similar due to the habit they wear. But, as Mathilde gets closer to these women and the truth, there are numerous scenes with closeups of facial expressions, removal of the habits, and extended discussions about their lives before the convent. It enables us to see these women as fully formed characters as opposed to nuns with one or two defining characteristics. It places us alongside Mathilde, not only discovering them, seeing them but also being wounded with them as some truly horrific moments happen near the closing moments of the film.

Almost none of the women in The Innocents have chosen to be mothers. But unlike the faith of many of them, they are figuratively called to be mothers. Even Mathilde, who is young and accomplished without a clear maternal desire, plays her part. What is a mother, but a caretaker through love? Mathilde literally risks her life and the ire of the Mother Superior to get these women the care they need. As is often the case in life, she cannot possibly save all of them. But by reaching the few that she does, and giving care to even the ones who try to refuse, she both saves lives and helps create new ones.

The Innocents is a challenging movie, both in tone and pace. It is a film that demands your patience, yet finds a way to keep you waiting for just one moment of happiness. It is grounded and connected to faith, power, maternal instinct, and beauty. Fontaine somehow manages to imbue it with care, fully lived lives, and sexuality; all without making any of that obvious. The Innocents is highly rewarding and one that is not easy to forget.