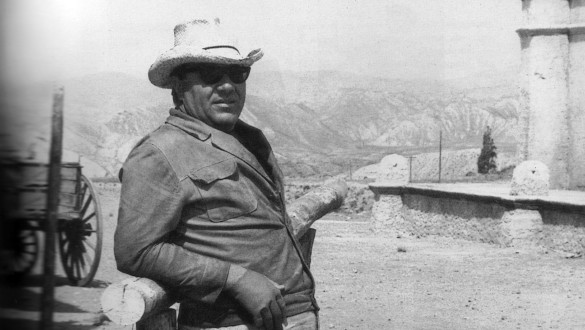 In Once Upon a Time in Hollywood, Rick Dalton (played by Leonardo DiCaprio) travels to Italy to perform in westerns under the direction of Sergio Corbucci. The reference is a tribute by Quentin Tarantino to a director who influenced his style and inspired characters, situations, and plots in films such as The Hateful Eight and Django Unchained. That is why Tarantino himself is the narrator of Django & Django – Sergio Corbucci Unchained, a documentary directed by Luca Rea that, far from being a journey through Corbucci’s career, works as a kind of essay to exemplify his enormous influence on the American director.

Despite having interviews with Franco Nero and Ruggero Deodato — recurring assistant and actor in Corbucci’s works, respectively — this film is conducted by Quentin Tarantino, whose voice, passion, and mastery of the subject make him our guide here. In fact, the entire editing seems to be revolving around his interview with the filmmakers; he isn’t just a narrator. This is the blessing and curse of Django & Django. Rea relies too heavily on his stories, missing the opportunity to delve into the Italian director’s cinematographic intentions. However, the final product is attractive thanks to the love with which Tarantino explains Corbucci’s filmography.

Naturally, Rea accompanies the words of his guide with the corresponding footage. Scenes from films like Navajo Joe, Duel of the Titans, The Great Silence, The Mercenary, and of course Django parade throughout the documentary. Each stop on this tour serves the purpose of explaining the style and intentions of its director and his connection to Tarantino’s cinema.

During the proliferation of the spaghetti western, Corbucci stood out for painting the cruelest and most savage Wild West, one where blood flowed freely and every character was in constant peril. This originated from the director’s anti-fascist intentions, which are briefly explained through anecdotes involving his childhood.

Corbucci’s narratives were based on revenge, his villains were personifications of fascism, and the protagonists were not exactly heroes, but avengers bordering on the edge of evil instead. This combination resulted in politically charged films that fascinated audiences and inspired many. You can feel the love in Tarantino’s voice as he describes the film qualities of his idol.

The documentary addresses interesting topics about Corbucci’s cinema: politicization, the importance of Burt Reynolds in Navajo Joe, his interest in the Mexican revolution (evidenced in his trilogy), his inspiration in Akira Kurosawa, and comics, the representation of morally terrible societies, his taste for comedy. Unfortunately, all of this is superficially explored. Ideas are proposed, but before delving into them, Rea changes the subject. This allows him to maintain a good rhythm, but inevitably causes frustration in the face of wasting the chance to dig into what truly made tick such a beloved filmmaker.

The dependence on Tarantino becomes even more evident when the film tries to talk about Corbucci’s post-western career: With no words from the American dedicated to the subject, Rea opts to use behind-the-scenes footage to try to capture his vibe. A poor attempt that demonstrates the inability of the director to think outside the box.

Despite being superficial and lacking in creativity, Django & Django gets the job done and has enough interviews, footage, and interesting anecdotes to keep your attention. If you know little about Sergio Corbucci, you will find here the bases to get started in his cinema. The film has to be appreciated as a connection between filmmakers: How did Corbucci’s cruel vision inspire Django Unchained? What similarities does The Great Silence have with The Hateful Eight? Where do all these scenes of extreme violence that Tarantino loves so much come from? This documentary will help you understand the answers to these questions.