Movie Review: Despite Oscar Isaac’s Performance, ‘The Card Counter’ is a Meandering Setback for Paul Schrader 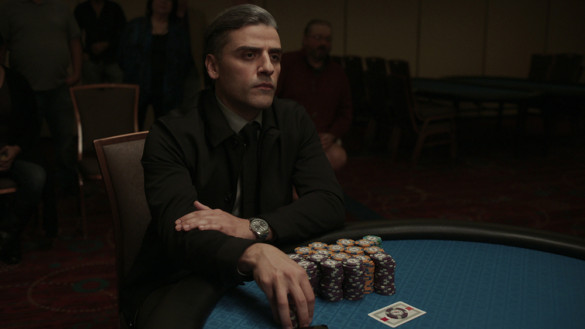 Synopsis: An ex-military interrogator turned gambler haunted by the ghosts of his past decisions.

It is no secret that director Paul Schrader is a controversial figure. From the subjects in his films to his meandering rants on Facebook to interviews he gives during press junkets, you never know what you are going to get with the guy. He’s a wild card. Moreover, he’s an interesting, confusing presence in the landscape of film because he’s written and directed some pretty amazing pieces of work; like First Reformed, Mishima: A Life in Four Chapters, Raging Bull, Taxi Driver, but also as many duds along the way. When you step into one of his movies, it is a lot like logging onto his social media accounts and reading the latest post, you just hope what you are seeing is something good. So, with his latest endeavor, The Card Counter, Schrader sadly delivers a jumbled, meandering mess.

We follow William Tell (Oscar Isaac), a former member of the military who was put in prison as a fall guy for unconventional torture methods used overseas. In prison, Tell learned the art of counting cards, and once he is released, puts his skills to the test, winning modest amounts of money to get him by without getting caught. He also lives by a code, which is the basis to why he won’t go big into the gambling scene, much to the dismay of La Linda (Tiffany Haddish), who specializes in finding players to sponsor for the World Series of Poker. As Tell moves from city to city, he comes across a seminar hosted by former Major John Gordo (Willem Dafoe), the man responsible for putting him in prison. At this meeting, he meets Cirk, the son of a soldier trained by Gordo to kill, just like Tell. Cirk wants to kill Gordo for what he did to his father and wants Tell to assist him in this execution. Instead of doing that, he takes Cirk under his wing and brings him along for the ride through his casino stops.

Sound like a lot? Well, that is a taste of the surface level story to get you invested in The Card Counter, but that’s also where the movie starts to fall apart. Running at the same time are multiple stories within one movie. We have Tell’s gambling obsession, Crik’s revenge plot, a romance between La Linda and Tell, a commentary on the military’s use of torture, and they just don’t mix together. It’s almost as if Schrader is trying to copy a lot of the success from his last film, First Reformed, where he weaved multiple stories into one holy gospel of religious fundamentalism when it came to the subject of climate change. It also dealt with a character’s struggle to cope with the realities of living helpless in an unforgiving world and being the only one screaming for change. In this, Isaac’s Tell is the only realistic person, who just wants to play cards, make a little cash, and move on with his day. But he gets wrapped up in this web of danger, thus resulting in him begrudgingly having to face his past. And it’s not practically entertaining to watch, as we see Tell slowly moving from storyline to storyline without actually making any profound impact.

Some could call this film a slow burn that leads to an ending that does have the best moments of the film. But the ride to get there is such a tonal slog, you can’t help but wonder what was the purpose this hypnotic venture if not to put us to sleep. Heck, from scene to scene, the way the characters speak is so scattered, it’s like each actor is in another movie than the person they are sharing the screen with. Isaac, who is one of the best living actors working today, is serviceable as Tell. He doesn’t do anything off the charts in his performance, but he is believable enough as a man going through all these internal emotions. It’s everyone else that is out of place. Haddish, a fine dramatic actress and hilarious comedic actress, isn’t given the tools to succeed in her role, while Sheridan is totally miscast and isn’t the right fit at all for this type of character. And given the amount of time these characters spend with Tell, you need actors that have chemistry with Isaac, and sadly, neither of them do.

But the major complaint of this movie is Schrader’s decisions as both a writer and director. As a writer, his characters, besides Tell, are very one dimensional and lack substance. Their dialogue is clunky and motivations aren’t fully justified. His direction is even worse, with annoying music cues from Robert Levon Been mixed into scenes that are repeated over and over again. Maybe it is to prove Tell’s point about gambling being a routine, but it is lazy filmmaking. Then there are the flashback sequences with Gordo and Tell, where Schrader uses an off putting fish eye lens to convey the horror of these events, but the only thing horrific is having to watch the way these scenes are shown visually. It’s just not good, plain and simple. Add in some harsh editing, and you’ve got a recipe for something that should’ve been great, but instead was a disappointing ordeal.

Since Schrader usually does one good film then one bad film, maybe his next project will be more like First Reformed, which was engaging and thought provoking concurrently. But The Card Counter is a misstep that makes you want to just fold in your hand and leave the table for good.