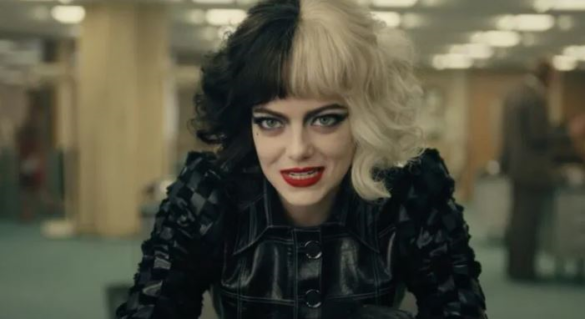 Synopsis: The story of Cruella de Vil is finally fully told in a reimagining from Disney.

After decades of exploiting their hit films through a rigorous re-release schedule, the Disney model has shifted. While the repertory screenings of their classics would rake in the dough (The Lion King 3D re-release in 2011 banked $94.2 million), streaming began to change audience attitudes. With accessibility becoming a premium, Disney had to find a new goldmine. After realizing Glenn Close’s 101 Dalmatians films made half a billion dollars, the company full-court blitzed the live-action space. Since 2010, there have been a dozen live-action Disney films based on their most popular animated hits. Cruella returns the 101 Dalmatians universe to the big screen. Surprisingly, it clears a path as one of the top-tier efforts thanks to its incredible energy and style.

Cruella explores the roots of the iconic villain, played by the alluring Emma Stone. After losing her mother in a tragic accident, Estella (Stone) finds a family with street kids Jasper (Joel Fry) and Horace (Paul Walter Hauser). Estella dreams of pursuing a creative career in fashion as the three execute a series of petty thefts to survive. She begins a career as a janitor, and after a drunken night, catches the eye of fashion icon Baroness von Hellman (Emma Thompson). When she discovers a connection between the Baroness and her mother (Emily Beecham), Estella develops the alter-ego Cruella De Vil to exact her revenge.

The story of Cruella should begin and end with Stone, who once again proves to be a singular screen presence. Stone won her Oscar, starred in generational hits, and seems game for any genre. Yet few actresses have ever moved physically through a scene like Stone, especially in her fiery entrance as the Cruella persona. Utilizing her lanky limbs and expressive eyes, she wanders through the scene with purpose and disgust. The fashion show she’s attending is fake, and her persona plays up that fact. But for Stone as the actress, she’s inviting us along for her own experimentation. While The Favourite and Birdman tested her dramatic range, Cruella allows Stone to explore her own subversiveness as an actress. It’s not camp, but her extravagant and arrogant turn invites us to explore a more versatile performer than one might expect.

Thompson’s turn deserves its own praise, as she seemingly relishes the ability to go bigger than her Late Night role that many unfairly compared to Devil Wears Prada karaoke. Thompson creates an ambitious and dangerous foe for Cruella, but their approaches offer very different interpretations of similar characters. Thompson embraces a quiet nature to the Baroness, even as she displays a volatile complexity that makes everyone an enemy. 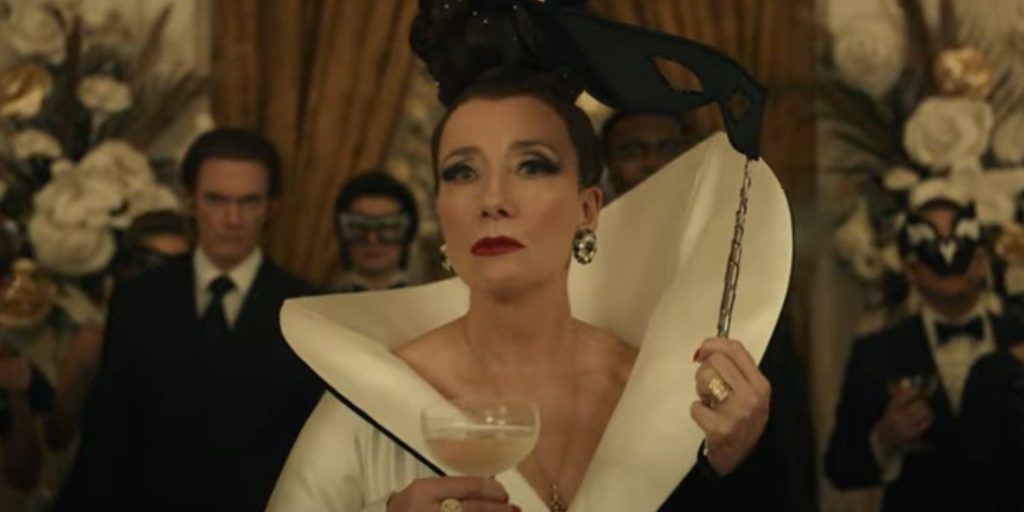 Stone’s interplay with Thompson is key to unlocking the performance and the movie as a whole. Stone’s Cruella is brash and emotionally raw as she seeks acceptance from the public. Yet her eyes tell a different story, one of an insecure woman trying to prove her worth in the world. It is in those eyes that you see pain and suffering, empathy, and anger. For Thompson, her control over her gaze leaves others wounded. A well-placed withering look destroys those who oppose her. It’s also a key to showing her lack of empathy, revealing a predatory killer instinct that Stone does not have. This juxtaposition must come early in the film and break from the Cruella we’ve seen in animation. Stone’s Cruella must be our loving protagonist, not the irredeemable dog murderer that stalks other iterations of the franchise. In lesser hands, this would feel like Disney is watering down its villain to sell toys. While this may also be true, Stone’s performance capably stands on its own and clicks the film’s gears into place.

The side characters deliver both heart and humor throughout the film. Fry becomes the audience surrogate, questioning the actions of those who surround him. The role could become have devolved into a guide rather than a fleshed-out character. Fry provides enough chemistry with his co-stars to prevent the questions from becoming annoying. For those who have not joined the cult of Hauser, the actor delivers yet another committed performance. He services the film above all else, willingly playing up the physical comedy and slapstick humor to deliver a Horace that becomes a heartwarming piece of the narrative. While early reports overstated the queerness of John McCrea’s Artie, the actor finds himself drawing attention whenever he appears. McCrea’s quick dialogue and energetic performance provides a shot in the arm that keeps the momentum rolling.

Director Craig Gillespie shows growth as a visual director throughout Cruella, even as he references famed shots of influential films. Direct homages to The Dark Knight, The Devil Wears Prada, and a bevy of heist films create a somewhat odd mishmash of images. Oscar-nominated editor Tatiana S. Riegel maintains a high energy momentum throughout the film despite the long runtime. Gillespie and Riegel deploy tricks they picked up on I, Tonya, marrying a non-stop barrage of pop hits with the images to craft entertaining montages. While still a tad long, Cruella never feels as labored as its Disney contemporaries.

Early in the film, Cruella plays up the exquisite costumes and style that will dominate the film. The tactile dresses and costumes scream for your attention; smashing black, white, and red all over the screen. Jenny Beavan adheres to the period setting but succeeds in creating many stunning pieces of clothing. The sheer amount of pieces worn by both Thompson and Stone are too numerous to count, but the story allows Beavan to create costumes within the characters’ costumes. It’s important to see fashionable clothes in a movie about fashion, yet Cruella stands out from the many films that miss the mark on that integral point. The makeup team gets plenty of showy moments as well, completely transforming Stone and embedding her into Beavan’s curated looks.

The cast buys into Gillespie’s vision of a subversive counter-culture brewing within London, even if the one depicted in the film has few real-world parallels. Within the decade, punk rock and anarchists would begin to flood the space, driven by the rise of The Clash, Buzzcocks, and Sex Pistols. Gillespie nods on their future rise, but the soundtrack strikes a wildly different tone. Instead, Cruella celebrates a decidedly pop sound, with The Rolling Stones, Nina Simone, and The Doors headlining. Worse, the score by Nicholas Britell gets few moments to shine. While the music and style are certainly unusual for a Disney film, it would have been fun to see Gillespie fully commit to the ideas percolating at the edges of his camera.

Cruella is not a masterpiece, but the infectious energy is impossible to ignore. While there’s certainly darkness within the narrative, the Disney retelling succeeds where many have failed. Cruella creates an air of silliness that lets the audience in on the good time. Staging multiple little heists, forging charming relationships with the (sadly) CGI dogs, and crafting a fun soundtrack create a party atmosphere around the film. Anchored by Stone’s hilarious and engaged performance, Disney has finally created a worthwhile entry in its live-action formula.