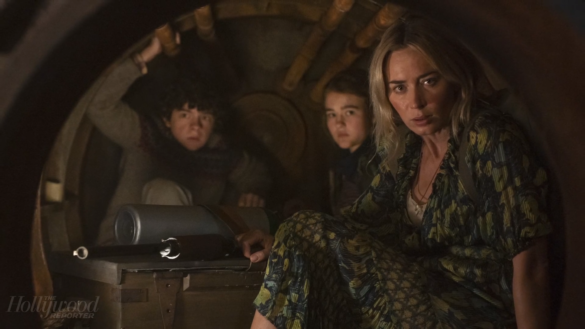 Synopsis: Following the events at home, the Abbott family now face the terrors of the outside world. Forced to venture into the unknown, they realize the creatures that hunt by sound are not the only threats lurking beyond the sand path.

One of the biggest strengths of A Quiet Place was that it did not feel the need to over-explain. We never got exposition on why or how those vicious creatures showed up on Earth, and it was all the better for it. With that in mind, it may seem like a major red flag that the second film in the burgeoning franchise begins with that explanation. On the contrary, it results in a fast-paced and enthralling introduction to the movie.

The new film, which opened in theaters this weekend, opens with a seemingly normal and cheery day in the New York town where our characters live on the day the creatures from the first film arrive. From the get-go, there are indications that this is a more technically enticing work than your typical blockbuster. John Krasinski and cinematographer Polly Morgan display an effectiveness with a moving camera, following Krasinski’s character as he moves about the town to stop by the grocery store and go to his son’s baseball game. Stylistically, it’s almost a reminder of the Coen Brothers’ No Country for Old Men. However, it doesn’t take long for the chaos to begin.

Though this intro may feel unnecessary at first, it’s useful in bringing us back into the world created by the 2018 film, and it’s an opening that’s every bit as electric and exciting as one can hope for. Most importantly, it introduces us to a new character, Emmett, played by the wonderful Cillian Murphy. This small introduction proves severely important, as the character plays a major role later on in the film.

After the frantic opening, the film picks up right where the first left off. We’re placed alongside Evelyn (Emily Blunt), Regan (Millicent Simmonds), Marcus (Noah Jupe), and the newborn baby must travel silently in search of a new home. After a close encounter with boobie traps and a few of the creatures, they are given assistance and refuge with Emmett, who lost his family to illness and the creatures. Emmett first states that the stay must be short-lived due to limited food and supplies. However, he’s pulled into helping the family when Regan sets out on her own, into dangerous territory, to find what she believes will be a group of survivors living on an island just off the mainland.

Although Krasinki’s presence on the screen is short-lived here, his impact clearly remains. In addition to his direction, the screenplay he wrote features some rich interactions between characters that allow the humanity of the story to remain intact. Of particular note are the scenes between Murphy and Simmonds. The script is intelligent enough to avoid filling Murphy in simply to replace Krasinski, opting to form a unique relationship between him and Simmonds. The film also creates an expanded role for Noah Jupe’s Marcus, putting him through pain and adversity that leads to noticeable growth.

The development of characters in the film is essential to remaining above the convolutions of a typical action film. And it’s clear that this is indeed an action film. While it does carry over some of the atmospheric tension and horror from the original, most of that is replaced with intense sequences featuring creatures that are even more fierce in this go-round. What does remain is the excellent sound design that puts us in the position of Simmonds’s character, who is once again the heart of the movie.

The characters are also strengthened by the performances behind them. Blunt and Simmonds carry over their excellent work from the previous outing, and Jupe takes advantage of the bigger role in his display of palpable fear. Murphy is not only a wonderful addition to the ensemble, but he also makes me excited to see him in a future outing (yes, there will definitely be a future outing).

Where the film is most notably lacking is in the obvious retreads of the narrative from the previous installment. While the movie does a nice job of expanding the world, introducing new groups of people, and creating even more depth for the characters, it’s also filled in by overly similar plot points. The ending is the most detectable case of this. It not only feels indisputably abrupt and familiar but also strange in its tone and message. While most of the film feels elevated from typical summer box office fare in its filmmaking, the ending is clearly designed to lead into a third movie.

This installment in what is seemingly meant to be an ongoing franchise may not work for those who find it too similar to the first film. But the film is so effective at building tension and delivering payoff that it works as a piece of entertainment with clever use of editing and Steadicam. What’s most pleasurable about the film is that Krasinski kept from abandoning the humanity of the characters that keep me so invested in the story. A Quiet Place Part II isn’t always as quiet as the title or the first film might suggest, but the more silent moments are the most impactful.