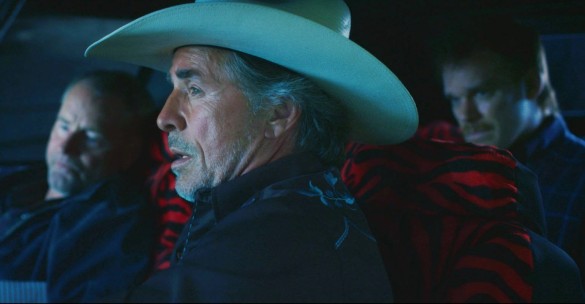 Synopsis: When a protective father meets a murderous ex-con, both need to deviate from the path they are on as they soon find themselves entangled in a downwards spiral of lies and violence while having to confront their own inner psyche.

DIRECTION
Jim Mickle’s direction is pretty riveting through a lot of Cold in July, which earns it’s name in a cold and chilling tone that certainly sets the stage well. The stark cinematography is gorgeous all the way through and a highly effective score helps make this film extremely gripping from the get go. However, Mickle does mishandle some of the story elements, particularly in the second half of the film that introduces ambiguity and questions. That being said, thematically it stays pretty strong, along with consistent performances and camera work. Overall, Mickle does a great job with this one.

SCRIPT
The story here is a tale of two different halves. The first half is a dark, chilling thriller surrounding Richard Dane (Michael C. Hall), who accidentally killed an a burglar who was intruding in his home. Richard’s not exactly sure how to handle that and soon his emotions get the best of him, which lead to more dangerous situations for his family. After Richard meets Russel, the father of the supposed deceased burglar, things get really interesting and thus the stage is set for incredible dynamics. However, there are twists at play and it becomes something else entirely. The second half becomes a more superficial mystery thriller that’s a bit more dull and trite, which is very disappointing. The script really loses it’s focus, and while there’s an interesting father-son dynamic at play, it doesn’t save the second half from incoherency and abandoned plot lines.

PERFORMANCES
Michael C. Hall, mullet and mustache, is fantastic here, especially in the first act. His character is shaken after the events of the intruder, which he sells incredibly well. Richard’s motives in the second and third acts, however, are unclear and ambiguous as to why he’s still in the story, so while Hall’s performance is great, a lot of it seemed unnecessary. Sam Shepard and Don Johnson are always great and provide some pivotal supporting roles that certainly elevate the film from it’s disappointing script.

SCORE
Jeff Grace’s score is easily one of the best of the entire year. He uses a digital synth that moves so fluidly and creates a sound that’s absolutely engaging. The score feels very 1980’s (the story takes place in 1989) while adding a thrilling tone that never feels too much or over the top. It fills the space so well and almost becomes a necessary character. Simply a-mazing!

FINAL THOUGHTS
Cold in July feels like two movies in one with kind of twists and turns that it takes. The first half is a riveting thriller with a great mystery that’s well executed and gripping on all fronts. The second half is more mundane, dull and been done before. However, there’s still some good things thematically throughout and the technical achievements save this film in a lot of ways. Despite the flaws, it’s still very enjoyable.