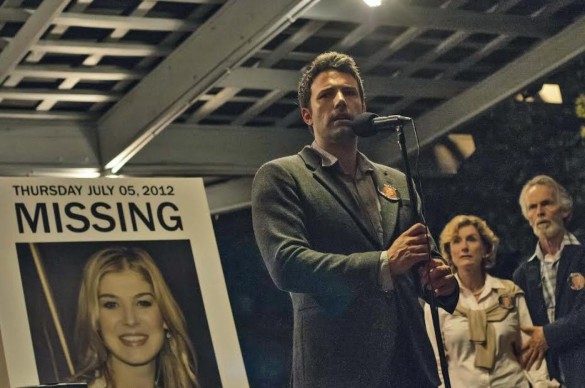 Synopsis: With his wife’s disappearance having become the focus of an intense media circus, a man sees the spotlight turned on him when it’s suspected that he may not be innocent.

DIRECTION
Gone Girl was one of my most anticipated films of 2014 because mixing in a great cast, a great director and a storyline so intriguing would even make God himself do a double take. David Fincher, just like the Seahawks in the Super Bowl last year, does not disappoint. Gone Girl is exactly why we should go to the movies. Gone Girl is like Blue Bell Ice Cream (never had it, sucks for you), it’s delicious, fulfilling and as you watch the film you will feel nothing but cold chills, just like that ice cream. In a time where movies try to out CGI each other, nothing can beat an engaging story and dynamic characters whom we develop a relationship similar to our child’s other parent- Love and Hate. And it’s Fincher that is in charge of putting on this Vegas type show.

Fincher, for those unfamiliar (shame on you) has films such as Fight Club, Zodiac, The Social Network and The Girl with the Dragon Tattoo on his resume. Fincher was working with a script by Gillian Flynn and adapted from her popular 2012 novel. The challenging thing for Fincher, in my opinion, was to effectively tell the same story from two completely different perspectives and in different parts in time. Nick’s (Ben Affleck) prospective is in the present where he spends his time with his sister Margo and the detectives. We get to know Amy (Rosamund Pike) through the past at first through flashbacks and her journal entries. The stances are different and Fincher had to showcase that well, which he does.

SCRIPT
Much like a suspicious cheating man, I will keep the plot details scarce as to not ruin the story for the non-book readers. Ben Affleck stars as Nick Dunne, who awakens on his fifth wedding anniversary to discover that his wife Amy has gone missing. As a missing person investigation slowly turns into a possible murder mystery, Nick is being watched more than closely than a lion watches its prey. The majority of the film is a big episode of ID’s Unsolved Mysteries. The audience knows the outcome and it’s up to the film to present the story in such a way that we as an audience are right there in Missouri.

There is drastic shift in narration that I will not spoil here, but Fincher was able to do a complete 360 and still have that same Blue Bell Ice Cream chills for us the audience. The way all the characters interact is a refreshing sight to see because too many directors (Michael Bay) cannot seem to grasp how to have engaging conversations between all parties.

PERFORMANCES
For the record, I again am all for Ben Affleck as Batman and if you still do not believe he can do it, than like the wife in the film, your negative thoughts will go away after seeing his performance. One thing you will notice is how much bigger Affleck looks in this film compared to his recent films. Someone said that he has that Superhero look, and that goes to show how dedicated he is to playing Batman. Affleck is like Richard Sherman in coverage – TERRIFIC. This role is perfect for him and he has one of the best “villainous” grins as noted by his wife Amy (in the film). Pike is also very strong in her performance. Now here comes the shocker nobody thought I’d ever say – TYLER PERRY DID NOT ANNOY ME AT ALL IN THIS FILM. Mr. Perry (respect earned) showed that he does have the ability to be a decent actor.

SCORE
As with several other Fincher films, Trent Reznor and Atticus Ross got the nod to score here again and it’s amazing. It definitely adds to the ice cream chills you feel throughout the film and is a nicely layered aspect that’d you expect from a Fincher film.

FINAL THOUGHTS
Gone Girl is the best choice this weekend and is worth the arm and leg for the admission. Congratulations Gone Girl, you have made the top 10 best list for 2014, and will most likely stay there. This film will blow you away like a Thursday Night Football game in Atlanta (right Tampa Bay?).