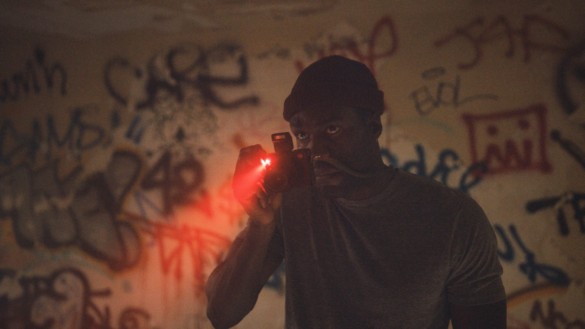 Plot: A “spiritual sequel” to the horror film Candyman (1992) that returns to the now-gentrified Chicago neighborhood where the legend began.

Clive Barker wrote the source material for Candyman called “The Forbidden” which dealt with urban legends that come to life. The 1992 film Candyman was created by Bernard Rose who adapted the short story into the Tony Todd and Virginia Madsen film that we know and love today, and with that, the 1992 version is a classic that goes down in the annals of horror, especially in a decade that wasn’t kind to the genre. Not only was the movie genuinely creepy with a solid handful of jump scares, but it had an entire atmosphere that was derived from not only the plotline but the acting and especially the beautifully crafted score that is hauntingly poetic and unnerving in the plethora of infamous horror movie scores. The original film lives on in infamy and is a positive note in database of horror monsters from the moment of its conception and we need to thank the fathers who brought this titan to life- Clive and Bernard, whom without Candyman would not exist, but in doing so we need to also give praise to the man himself who brought the character from words on a page to the guy we know, love, and fear 29 years later, and that is Tony Todd- whose persona non-grata attempt at a ghostly boogeyman actually had us coming back to Cabrini-Green year after year, time and again.

Now with all that praise, it actually pains me to write the rest of this piece as it won’t be as kind, but truth be told, I will definitely make sure to point out the good as well, not just the bad, and the ugly. It is not in my doing so of writing this review to tear this film down with a one-sided view of the film but to talk about the film on a spectrum of not only my view but me talking to other press members at my screening tonight. So, with that said- let’s start with the good.

Nia DaCosta is a visual genius. With this being my first view from the lens of her world, I will say that I am thrilled to see what else she brings to the table. In fact, the best thing about this film is DaCosta’s vision and what she’s portraying on screen. From the crisp visuals to the sense of intrigue that she allows on the screen to a property we as an audience ( or most of us) should be aware of by now. DaCosta was the absolute right person to make this film. The other best part(s) about this film were a few of the actors- particularly Teyonah Parris as Brianna, Nathan Stewart-Jarrett as her brother Troy, and the return of Vanessa Williams as Anne-Marie McCoy- they were the absolute standouts in what felt like a very crowded film.

With that my praise for the good ends there- I want to get into the bad next- and that’s the score. What made a huge part of the original so iconic, and scary was the chilling score created by Philip Glass, his main theme titled “Helen’s Theme” is the most remembered thing about the movie next to Tony Todd’s performance in the original. It was really lacking in the scoring department. I understand wanting to create your own entity, but when you sign on to make a Candyman sequel you better bring what the fans love from the original- I dare you to try and make a Halloween sequel without a version of the infamous John Carpenter score, or a Saw sequel without a type of “Hello, Zepp”. You’d be laughed off the screen and this Candyman isn’t exempt from that same criticism. Huge missed opportunity, and sure you might be saying “It’s called Helen’s Theme, Joey” and sure I’d say you’d have a point if they didn’t use Helen’s story as heavily as Candyman himself in the film. While Academy Award Nominee Virginia Madsen may not be “personally” in the film, she’s throughout the film in stills, stories, and even new voiceover work.

Yayha Abdul-Mateen II is also another part of the film that just doesn’t work here. I never actually connect with him in any project he’s done. He never feels like he actually knows what he’s in and I really wanna be won over by him but this performance still doesn’t have me convinced of his talents that many others see.

Now the ugly of this film, the story. It makes almost no sense going hand in hand with the original. And yes again “Joey it’s a LIGHT sequel!” Okay, well if it’s such a light sequel then why bring Helen into the story at all? Why use Anne-Marie and her son? Why use anything in the realm of the lineage of the original Candyman lore? It feels like there’s a solid 25 minutes missing from this movie because it feels overcrowded with stories it wants to tell instead of the full complete story it’s trying to tell. The film’s story also really fails the myth and lore of Candyman by completely changing the Candyman legacy that we’re taught in the first film. The story of a racist crime that was avenged upon by the ghost of the character to those who believed in him has been changed to a story about the many awful crimes of innocent black men across Chicago. We live in a country today that is completely messed up with injustice done by the police everywhere and innocent people of color are constantly targeted day in and day out, it’s wrong- but my biggest issue with the plot change here is this film causes the first to be completely useless in its storytelling because if all these other men were also “Candymen” than what Helen went through and what Anne-Marie went through was for nothing as at that point Tony Todd’s Candyman was not even the most “recent” terror of injustice, it made Michael Hargrove’s Candyman second rate and not needed, which to his character’s story isn’t fair if we’re supposed to care about this guy as well. It feels like a giant cop out.

This movie also is “too woke” and that is a direct quote not from ME but from another critic I was sitting next to at my screening. To my left was a white female critic, and to my right was a black female critic, and the person who told me this comment was the black female critic. She mentioned that while she could see what the movie was trying to do, it was completely alienating an entire group of people. The white female critic next to me said she felt completely uncomfortable watching as if she felt like she wasn’t wanted. I have to say- I agree with both sides- I can see what the filmmakers wanted to say here but I agree also with the critics I was seated next to, this movie is Woke with a capital W and it completely takes away from the enjoyment of what I and apparently those women want to see in a Candyman movie when it comes to a continuation of what the original so beautifully laid out.

Tell your stories, make them uncomfortable, make them your truths, but don’t try to alienate an entire fanbase of people behind a franchise, it feels lazy and disrespectful. Candyman at the end of the day is out there, but I say stick to the original, it’s better on almost every level. This property works best when it is not focused on being a slasher film, but instead, being a horrific love story that leaves you unnerved and afraid of wanting more.