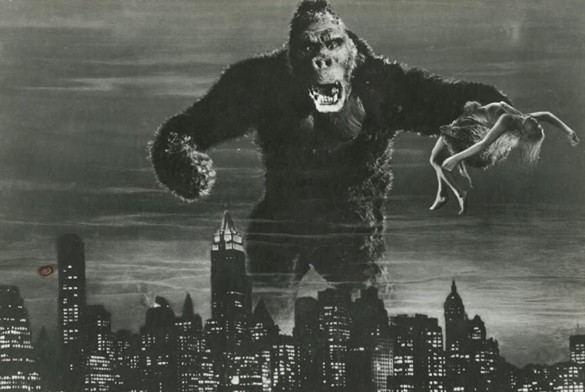 King Kong (1933) is a film that is famous for a couple of scenes featured in its second half. Absolutely nobody touts the sluggishly paced, poorly acted, cliché ridden first act as one of the reasons that the film is considered great. In fact, I assume that many of its fans are willing to indulge its obvious flaws because they love the Freudian hysteria that comes to the fore when King Kong finally appears. It is a terribly uneven, messy piece of work that is dull for long stretches, so forgive me if I don’t think of it as a masterpiece. There were brief, startling moments in which it came to life and became an opportunity to show off stop-motion animation and other technical innovations. Like so many blockbusters that followed in its footsteps, it fails to build an engaging story around its action set-pieces. I can’t help but feel like this encouraged filmmakers to think it was acceptable to put little to no effort into scenes that didn’t involved buildings being knocked down or women being thrown around.

At its core, this is about the fragile, complicated relationship between King Kong, a giant ape living on Skull Island, and Ann Darrow (Fay Wray), a starving indigent who was roped into becoming an actress. She traveled to Skull Island in order to star in a film being produced by Carl Denham (Robert Armstrong), but he didn’t expect King Kong to be such a strong, powerful creature. Leaders of the native population decide to kidnap Darrow and give her to King Kong in order to stop him from getting violent. He is attracted to this ‘golden woman’ and wants to take her as a bride. She is initially horrified by King Kong’s aggressive behavior, but comes to love and care for him. When her human boyfriend, Jack Driscoll (Bruce Cabot), decides that he needs to kill King Kong so that he can save her, she comes to believe that she needs to defend the ape. When dinosaurs are introduced into the mix, King Kong becomes increasingly willing to solve his problems by physically attacking others.

There is nothing exceptional about the plot and the romantic, Beauty and the Beast-style romance between a human being and an animal is the only surprising element of a fairly routine genre movie. It is disappointing that the screenwriters felt the need to directly call out their main influence through dialogue, but at least they were aiming slightly higher than the writers of Sex Maniac (1934). The film explicitly acknowledges that King Kong sexually desires Darrow and she has certain sadomasochistic urges. She’s barely clothed and when he sniffs her, you will probably be hit with a wave of revulsion. The erotic charge between the two characters is able to throw you off balance, and I kept hoping that the film would go completely off track. I hoped that the second act would be entirely devoted to scenes that dealt with this bizarre attraction. Alas, the film keeps returning to the dull human characters who want to track Darrow down and save her. I understand that they needed to be there in order to take King Kong down and spark the tragedy that serves as the film’s ending, but couldn’t they have been slightly more engaging? Whenever they appeared on screen for long stretches of time, I had to fight the urge to fall asleep.

Perhaps the issue is that I was evaluating this as a romantic drama. According to AFI, this film is primarily about the love triangle between Cabot, Darrow, and King Kong. In reality, it is mostly an excuse to have King Kong attack people and objects. For some, this will be satisfying, for others, including myself, a more well-rounded piece of entertainment will be required. This is a film with severe, debilitating weaknesses that prevent even the exciting passages from being as engrossing as they should be. This means that I can’t fully comprehend why people are so enthusiastic about it. Maybe this is one of those widely accepted classics that needs to go through a critical reevaluation.

It can be hard to accept the fact that certain films are not as great as they might have seemed when they were first released. There’s a difference between a highly influential classic that still holds up, and an influential hit that was vastly improved upon by the films that followed it. It Happened One Night (1934) popularised a lot of the tropes which pop up in almost every romantic comedy, but it also hits all of its marks better than most of its imitators. It doesn’t feel too much like a product of its time and Claudette Colbert and Clark Gable gave the sort of intuitive, charismatic performances that great movie stars can effortlessly turn out. With King Kong, you can see how better technology was able to advance the quality of films like this. You can’t improve upon a star like Colbert but you can produce better practical effects with more developed technology. I don’t think that this fully earns its reputation as one of the greats when it falls so flat from a modern perspective. I usually adore 1930s films, it might even be my favorite decade of cinema, but not everything can stand the test of time.