Movie Review: Born to be Blue is devastatingly and gorgeously blue 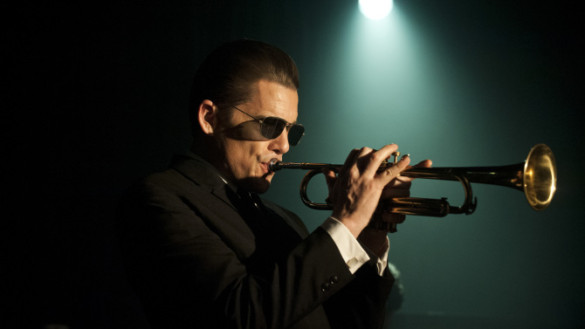 It’s not just the name of a song, but a reflection of Chet Baker’s own destiny. Much like the modal jazz music of its time, Born to be Blue is a film drenched in sadness, a melancholic expression often reflected in the best of the jazz genre made famous in the 1960’s. It is a film to be felt, not so much shown or told, and all the better for it. In a modern age when biopics are too focused on historical accuracy and telling its audience absolutely everything, Born to be Blue rightfully chooses to focus on singularity, both in narrative and mood.

Like Miles Ahead earlier this year (about the great Miles Davis), Born to be Blue is a jazz-infused biopic, this time telling the story of jazz trumpeter and vocalist Chet Baker. Focusing primarily on his life in 1966 (intelligently focusing on one point of the central figure’s life), Baker is hired to play himself in a movie about his first time doing heroin, and is soon touted for a musical comeback, all as he romances his current flame Jane (Carmen Ejogo), the actress hired to play Baker’s opposite. Jane is a fictional character, a hybrid of all Baker’s women in his life; in fact, this entire film is a hybrid in fact and fictional storytelling, similar to Miles Ahead earlier this year. One could even argue that both Miles Ahead and Born to be Blue should be viewed as a sort-of double feature, not just because Miles Davis himself is also featured in Born to be Blue, but for how these movies are also aesthetically similar. Writer and director Robert Budreau crafts a film that is at once experimental and incredibly melancholy, and just like Miles Ahead those aesthetics play beautifully into the film thematically.

As expected, Ethan Hawke gives one of the year’s best leading performances. For a film primarily about sadness itself, Hawke emulates this torment and sadness in all the needed ways.  Two scenes show this; a painful scene in a bathtub in which Baker attempts to keep playing his trumpet despite getting his teeth bashed in after a mugging (cringe-worthy in a well-earned way), and a moment with his father, played beautifully by Stephen McHattie, creating a realization that Baker’s choices will lead to someone becoming unhappy, whether that’s Baker himself or those around him.  It’s devastating, and sometimes hard to watch, but well-earned in its execution.

Carmen Ejogo as Jane (and Elaine respectively) represents that harm on the outsider, a result of Baker’s life choices, but there is still joy to be had, a great juxtaposition that makes for a good argument. Essentially playing two roles, the beauty in Ejogo’s performance is how each of these two respective characters are indeed reflections on each other; they both endure and suffer just the same, but a balance is still needed for when those moments of suffering cease for moments of love and affection instead. As a result, Ejogo gives one of the best supporting actress performances of the year, and the film doesn’t work without her balanced characterization.

As a lover of classic jazz music, I may be a little biased toward films like this, but the truth is Born to be Blue succeeds in exactly what it wants to do.  In the end it boils down to a single decision, a realization that no matter what path is taken, someone is always saddened; Budreau is fully aware of this, and through his writing, directing, and even choice of jazz songs to fit the soundtrack (sort of the antithesis to the vibrancy of Miles Ahead), he crafts one of the most somber films of the year. This is perfectly reflected in the film’s final minutes, arguably one of the best endings to a film all year; no matter what, in how all our decisions impact others (whether it is Chet Baker, Jane, Elaine, or even Chet’s family), one of us is born to be blue.