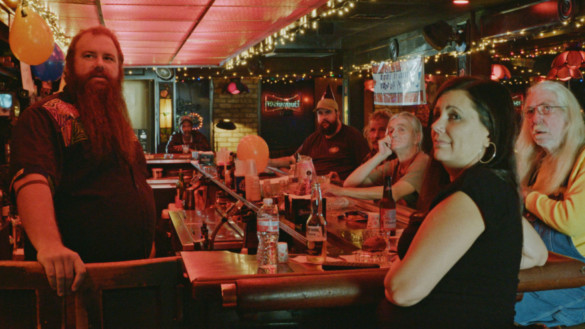 Synopsis: Patrons and staff enjoy their last night in a Las Vegas bar that’s shutting down.

An old man wakes at the bar mid-morning and recites Shakespeare as he shaves in the bathroom. His friend soon arrives, with long white hair and beard and sporting a bright yellow sweater with blue denim overalls, making him look like a cross between Gandalf the White and a Minion. Not long after a large Australian enters with a brown paper bag we will eventually learn is filled with fireworks. These are the clientele of the Roaring ‘20s, a fading dive bar in Las Vegas. They are a colorful bunch of locals, prone to hysterical laughter, drunken aggression, and tearful reminiscing.

But, just as the real Roaring ‘20s ended famously badly, this drinking establishment’s time has come to a close. With Bloody Nose, Empty Pockets, documentary filmmakers Bill and Turner Ross gloriously capture the highs and lows of the ‘20s last day/night of business in the latter half of 2016, celebrating the lowly and unassuming patrons as they reflect that their one place of community is being taken away from them. It’s a sprawling, funny and touching film, even if the Ross brothers’ insistence on every character having a perfect ending feels a touch artificial for a documentary so committed to living the moment.

The older characters we meet are characterized by a mix of biting cynicism and jovial humor. They recognize their lives have not turned out the way they want but have mostly come to terms with it. Like its customers, the ‘20s is self-aware of how tacky and low-rent it is, and never makes pretensions above its station – its farewell cake has the heartfelt message “This place sucked anyways” written across it. It’s endearing to see an environment so accepting of itself and the people who come and go within it, but it’s also quietly moving. You watch the sparkling wit, intelligence, and love these people are all capable of and wonder why they haven’t achieved the lasting happiness they deserve.

There’s a wide variety of philosophies bouncing around within the ‘20s four walls. Michael, the Shakespeare-toting sleepover guest, rejects sentimentality, telling John the Aussie, “I am someone you hang out within the bar. I am not your family.” He becomes a pseudo-preacher to the bar’s younger patrons, warning them at every opportunity to save their souls and not waste their lives like he did. Others are not so lucky in having such perfect clarity over the problems in their life – Bruce is a veteran who breaks down into tears as he struggles to comprehend why he’s been treated so terribly by society after his service. And then there’s Lowell (Gandalf/Minion), a high-spirited, alcoholic Santa Claus, who has affection for his fellow comrades that disputes Michael’s cynical attitude. These people come here because they have nowhere else to go, and as the night goes on and you see how much they need each other’s company, you’re left desperately hoping they’ll keep loving each other when they’re not inside this building.

The Ross brothers are obviously committed to capturing the immediacy of reality, immersing the audience in the present moment, and vitalizing life through the camera. The best documentaries aren’t necessarily the most informative ones, but the ones that make you feel most present in the life that’s represented on screen. As it progresses, Bloody Nose has an uncanny ability to make you feel like you’re joining the characters on a 12+ hour expedition of drinking at a bar. You find yourself getting sleepy and zoning in and out of conversations, feeling exhausted and cranky by the uncomfortable insistence of people leaning on you and slurring sentences in your face. Your head gets foggy with the effort of just trucking on through the night, and when the subtitle lets you know it’s 4:41 in the morning, it slaps you in the face. It’s a draining watch.

And yet some part of your brain questions just how genuine every moment is. The Ross brothers have an eerie knack for capturing a soulful, personal moment for pretty much every character, in a way that wraps up the narrative so satisfyingly that it robs the film of its rawness, and it feels more like a hand-held, naturalistic drama. The commitment to making sure no character is left unresolved means the wild, unpolished nature of the doc gets occasionally lost.

But what a resolution these characters get. Throughout the night, the characters exit the bar in different ways – some have to be carried out, others slip away with one last look over their second home. John the Aussie has the most memorable – he goes outside, yells at the sky, “I fuck well and I do shit!” before disappearing into the night. But when Michael is woken up the next morning, and shame overpowers him, he apologizes, packs up his stuff, and just walks out. We see them drop off, one by one, knowing it’s the last time they’ll leave that bar, a fact that some resist and others accept. It is a resoundingly emotional experience watching the farewells, the heartfelt brotherly love, and the guilt-ridden confessions. You’re tied to these characters by the end, and it hurts to let go.

Goodbye, you guys, I found myself thinking, we’ve been through a lot together. The fact that Bloody Nose makes you feel a part of this last night is pretty special.