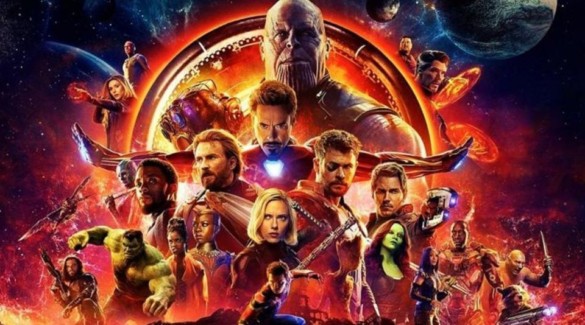 Synopsis: The Avengers and their allies must be willing to sacrifice all in an attempt to defeat the powerful Thanos before his blitz of devastation and ruin puts an end to the universe.

14,000,605 to 1 — the likelihood of Earth’s Mightiest Heroes winning Thanos (Josh Brolin), the Mad Titan with a doomsday boxing glove waiting to be jeweled.

With that info, Anthony and Joe Russo remain buddies with the villains of Marvel-verse; this film being the third time in a row where the brothers enroll our heroes in a class about the prospect of defeat, the flip side of a saved day. Notice that it’s the team doctor, Stephen Strange (Benedict Cumberbatch), who reveals the aforementioned grim odds. Intel from someone with that title is unquestionable and final. That’s a lump, true, but the argument as to why we should still absorb it is compelling: Although burdened with enough scale that can minimize the meaning of “scale,” Infinity War rarely buckles when there are a million ways that it could. Now that’s a marvelous show!

Or perhaps half a show, as there will be another round of this stony struggle — time to brush up footage of the six colorful and powerful cosmic pebbles that have either cameoed or be the main draw in past films — around May 2019. As with another Disney tentpole, the Gore Verbinski-directed Pirates of the Caribbean, Infinity War is a two-parter without the “Part” subtitle. Surely, once the dust settles, you will feel irked, cheated and eager for a time machine. Also surely, you will think back about what has unfolded: the battles’ width and breadth, all directed with more assurance even if the editing is still too jumpy at places; where the ripples of an action reach; and the ways folks from worlds apart become attached. Like a mash-up that can function beyond “also-guest-starring” realms, the new bunch — like Strange, Black Panther (Chadwick Boseman) and Star-Lord (Chris Pratt) — and their respective supporting ensemble seamlessly interact with the originals — mainly Iron Man (Robert Downey Jr.), Thor (Chris Hemsworth) and Captain America (Chris Evans). To that end, the locales where each hero hails from and familiarizes with, while varied, get to populate the same fabric without strain — as envisioned and as it’s supposed to be. And so the “assembly” essence that forms the Avengers’ gets to be at its most pronounced — some conflicts from before must be tossed aside first — to the point unity is now a sense and a group shot is no longer a requirement (seeing one is still great, though!).

But enough with the positivity. Actually, that is it with the positivity. With the Guardians of the Galaxy on board something humorous will surface, but as this is a Russo brothers’ venture the ha-has — known among followers and dissenters as Marvel’s bread-and-butter — are the Easter eggs. It’s not a multiversal crime to do so; the MCU could always use more antagonists like Loki, Killmonger, pre-turned Bucky or Zemo (when he’s seen) to strain the do-gooders. Thanos definitely is one — easily the best, too, as Brolin’s voice has the right level of braggadocio and conviction to frame him as a man-on-a-mission instead of exclusively comic-book villain. And with the pixel work receiving more TLC than Steppenwolf, the world-cleansing program he’s on remains inviting if far from novel.

As seen in The Winter Soldier and Civil War, Infinity War lets the hostile party to hoard the spotlight with enthralling results. Thanos’ presence, or the hint of it via his bodyguard quartet The Black Order, is what keeps the film together and bloat-free amid changing perspectives, settings and even timelines. As if in honor of this, Alan Silvestri’s score emphasizes the somber mien over the heroism and Trent Opaloch devotes more beauty toward framing the rotten-hearted’s looks & actions. No need to have a hawk’s eye or ear to detect these: After the 10th anniversary logo is introduced — without the theme, by the way — and we get to know the time frame (post Ragnarok), we are “treated” to two substantial departures.

And that’s just 10 minutes in.

Since the purple-tinged overcast bears this much density from the start, Infinity War leaves little wiggle room for better and worse. Along with us having no choice but to fixate on the lengths Thanos will go to complete his mission, there’s a high risk of crucial emotional beats being registered as overdone melodrama. It seems the mantra of “go Marvel big or bust,” apt since the film is tasked with proving it as a product 10-years-and-18-films in the making, has seeped into areas it shouldn’t have, or not stopped when it’s possible to.

That said, there is more to embrace than repel here, even if Infinity War — with higher tension, villain-first angle and merciless deletions — sets out to upset. It’s an evil, yet not unnecessary. Only 365 days (or fewer if another date move is pulled) to go before the actual conclusion and — as death is supremely lenient in comics — the return of familiar faces, but one thing is clear: The MCU knows it needs a future, and the seemingly in-the-million bouts of despondency today is needed so a lengthy tomorrow can happen. “Suffer first, prosper later,” as the saying (?) goes.

Hear our podcast review on Episode 271.