Movie Review: ‘Army of the Dead’ cannot decide on a tone for the over-stretched story 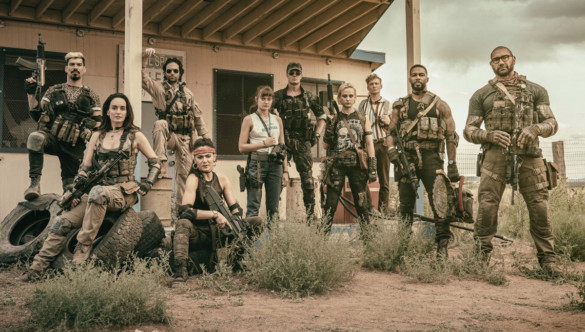 Synopsis: Following a zombie outbreak in Las Vegas, a group of mercenaries take the ultimate gamble, venturing into the quarantine zone to pull off the greatest heist ever attempted.

The past few months have been quite a positive turnaround for Zack Snyder. Having finally gotten to release his version of the Justice League movie and for it to get positive reviews across the board from fans and critics alike, it is the perfect time to continue that momentum and release his latest film Army of the Dead. Overall, the marketing for this film by Netflix has been fantastic, with some of the best poster designs and trailers of the past year. Even if you are not a typical Snyder fan, it seemed like this film would be one that anyone could enjoy.

Before getting more critical of the film, it is important to highlight the good aspects of this film. This film primarily is able to work because of the performances from most of the actors. This is a packed crowd, and yet each member of the cast is given time to shine and to add their personality to this story. In particular, it is becoming harder in Hollywood to ignore Dave Bautista and this is his best performance to date. Being given a meaty role that not only has to be the action hero lead but have this inner conflict that he faces during an apocalypse gives Bautista a lot to juggle at once, but he shines and demands to be taken seriously.

Whilst it was certainly not a perfect replication at times, I personally want to applaud Zack Snyder for the work that he put in post-production to remove a previous cast member out of this film and recasting. It is obviously a lot of hard work to recast someone and try and place them into the film all during post-production, but the work done with Tig Notaro was phenomenal and what a person to replace the role with. It honestly felt like she should have been there from the start, and the team behind the post-production did a wonderful job placing her in. Recasting that late into the film’s production is something that obviously no studio wants to deal with, but Army of the Dead shows that it is possible and that it may just be the best option.

Aside from the incredible zombie tiger that is highlighted in the trailer, it was disappointing how lacking the creativity was within the design of the film. With a landscape to use such as Las Vegas and in a world where there is an apocalypse happening, the world for the most part felt bland and unoriginal. Most of the visual work went into bringing that zombie tiger to life and little attention was brought to having fun with the actual zombie designs. Not only that, but most of the cinematography resorted to slow-motion shots and explosions, trying to play off of the major blockbusters but doing little to make it fun or original.

Thinking back on the film, it is still unclear what the tone of the film was meant to be. So many of the direction choices by Snyder lead me to believe that he wanted to have fun with the subject matter and mock the formula of the zombie genre. The opening scene of the film, which establishes the lore of zombies into this world, has an awkward humorous tone to it that turns into a Michael Bay-style blowout. When this scene transitions to the official opening credits, it felt like it was cut in a way to be entertaining and to make fun of the genre, but it was hard to fully embrace the style.

This is heavily contrasted in the main storyline of the film, which is actually a touching story about rekindling friendships, family connections, and falling in love with people from your past. There is a heart to the story, and the actors do a good job with what they are given to work within this script. However, the tonal shift between these serious moments and the zombie apocalypse itself is so jarring that it is hard to enjoy. Whilst Snyder may have written and directed this film, it does not come across that way on the screen as it just feels like he forced his style of filmmaking onto a more serious and heartfelt script.

We all know that Zack Snyder likes to tell a lot within his films and give the audience as much time as possible in his worlds. Whether Justice League needed to be four hours is one question, but this was not a film that needed to be 150-minutes long. For how simple and overdone the main structure of the story is, the runtime was stretched out through the use of unnecessary montages and slow-motion shots, both of which did little to actually add context and heart to this story. When thinking of zombie films from the past few years, including Zombieland: Double Tap and The Dead Don’t Die, they clock in between 90-minutes and 110-minutes. This film could have done the exact same thing and it probably would have fixed my major issues within it.

Netflix is a studio that clearly loves to give their directors creative freedom to do whatever they like with their films, and in cases such as Martin Scorsese and David Fincher, it certainly can work. However, people do have issues with the runtime and editing of both of their Netflix films and there are a lot of issues that can be pointed out with Zack Snyder’s directorial choices in his Netflix work. If this film had a shorter runtime and a clearer direction on whether this was a serious version of a zombie movie or a humous parody of what the genre has become, then there would have been a good film here. Sadly, the final result is one that leaves me burnt out and still wishing for a good revival of the genre.