Movie Review: ‘Enfant Terrible’ Is Not Your Standard Biopic 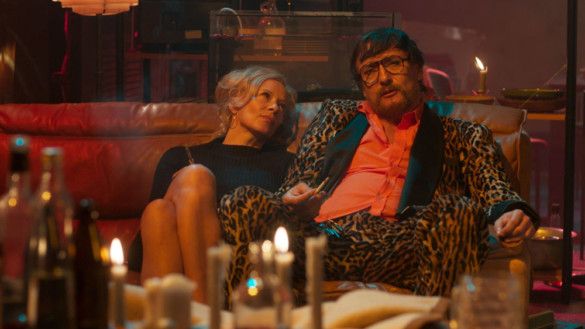 For every great biopic, there are at least 10 terrible ones. One of the reasons that biopics are an easy target for harsh criticism is the similar notes they tend to hit. Of course, this isn’t always the case. There seems to be pressure to cover absolutely everything about a life, especially if that person is quite celebrated. With sites like Wikipedia being not only known, but used by just about literally every person on a daily basis, there is no shortage of information. So, this poses an extra challenge for filmmakers. If I can look up all of the details, what do I need you for? This is why even a good biopic needs vision behind the camera and connected to the script. But even this is no guarantee of greatness.

And no guarantee of greatness brings us to one of the latest biopics available to see, Enfant Terrible. Oskar Roehler’s film about the life and impact of fellow director Rainer Werner Fassbender does manage to avoid the usual pitfalls of the biopic. There is neither a focus on his childhood nor any concern on making him likable. Fassbender (Oliver Masucci) is portrayed as a difficult man, a force of nature and of destruction. He wounds everything in his path, including himself. From his introduction, he is full of himself, overly confident, and cares not for subtlety or kindness.

In an interesting decision, Roehler and screenwriter Klaus Richter seem to actively avoid making Enfant Terrible actively cinematic. If you are looking for a history lesson in how Fassbinder of the German New Wave made his films, look elsewhere. In fact, the film opens as Rainer takes over control and direction of a stage play. This makes sense, of course, given not only his history, but the relative ease of taking experimental chances on the stage. But, for better or worse, the entire film feels a bit like a stage play, divorced from any sense of realism.

But I mean it when I say better or worse, as there is plenty of both here. Among all these adjectives listed previously, Fassbinder is also shown to be a man of appetites. Roehler makes this clear not only through his proclivity for sex, both casual and relatively committed but also through the presentation of Masucci’s body. Repeatedly, Masucci is either topless or shown with an open shirt. This allows him to display an obvious belly. But, in a perhaps drastic change from our own cultural norms, this is not played for laughs. Fassbinder is both an object of desire and a man on the prowl. He consistently takes lovers and the film does not shy away from this, both in its visuals and in moments of dialogue.

Although this is refreshing to see, it is also a key to his repeated self destruction. We are witnesses to his many betrayals by men but despite that, we are never fully in his corner. Our witness status to the way he treats people in general stops us from catering to his whims. When people lash out or leave him, it is understandable. This likely goes back to Roehler and Richter’s choice to avoid giving full context to Fassbinder’s mind and experience.

As a relative newcomer to the world of Fassbinder and a fan of film in general, it may have been preferable to have a greater understanding of his directorial choices and what impact his fame truly had on his psyche. Now, the film does mention that his films become popular, but it almost feels like it does so in a glancing way. Roehler is much more interested in the live action car crash that is his love life. And again, even these moments that touch upon his career feel much like a stage play. Suddenly, we are at dinner and we find that someone important likes his work and he breaks down. This is one of the more human and wonderful acting moments from Masucci, but it is paired with some of his worst behavior. So, like life, this powerful moment is undercut by a consideration of whether we should be rooting for him to succeed or fail. Like all great artists, Fassbinder is not wholly good or bad. He is a walking contradiction. A man who deeply desires real love, but is hamstrung by his choices to barely know his lovers before inviting them into his life. There is a palpable need to both be understood and to react violently when he is not.

Enfant Terrible is certainly not your standard, boring biopic. Roehler makes interesting, focused choices in his direction that draw us in, despite having moments in which we hate his subject. The stage play dynamic is at once both intimate and distant. But for what it’s worth, this film makes one even more interested in understanding and viewing more of Fassbinder’s work. And unlike many biopics, it leaves us with little interest in reading a Wikipedia entry on the man. Enfant Terrible is able to paint the picture of a terrified, complex, deeply flawed man who has a lot to give to the world of film, even if maybe he should have given to himself and his compatriots a bit more.