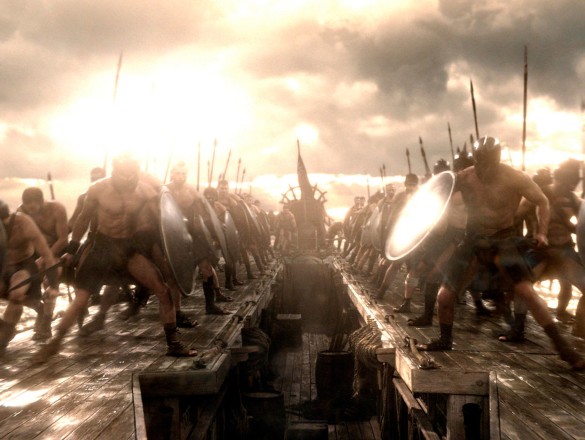 DIRECTION
Are you a sidechick? Do you enjoy Scandal? If you answered yes to either of these questions then you will absolutely love 300: Rise of an Empire. Unless you were single in 2006, you probably were dragged to see 300 in one way or another. It might of been for the violence or for the abs, which were harder than Jaden Smith character in  After Earth. If you ever wondered what a headache looks like, then Rise of an Empire is perfect for you. Director Noam Murro thinks he knows what made 300 popular. Murro thinks that we value the storyline so he feels it’s important to educate us on the background of the events surrounding 300. The film starts off with an audio-book style narrative, courtesy of Lena Headey, that will even cause the energizer bunny to nap. Murro employs flashbacks, bad camera shots, awful CGI and by far the most annoying thing was all the slow-motion fighting scenes. The fighting scenes really pissed me off because this movie believed that the more blood the better and in this case he was too much. When people got cut they had an excessive amount of blood rushing out. Apparently, losing rivers of blood was not enough to kill certain people. I do not know about you but if I lost more blood than most PG-13 movies combined, I will not be able to still reach Super Saiyan levels.

SCRIPT
Rise of an Empire tells the story of the side-chick, Artemisia, and her game of battleship with Athens and their leader Themistocles. The events of this movie take place before, during, and after the events in 300. In the most boring narrative ever, we learn how Xerxes became a God-King, and I was dying of laughter as it was explained. After Themistocles killed the previous King Darius with an arrow that will put Hawkeye to shame, Xerxes, looking like the Son of God, goes into a cave and into water. He then emerges from Trinidad James’ closet and becomes the all gold everything God-King we all know.

PERFORMANCES
To keep actors employed, studios sometimes make movies for no reason and this film is one of those pointless movies. 300: Rise of an Empire stars Lena Headey, Rodrigo Santoro, David Wenham, and Andrew Tiernan reprising their roles from the first film, alongside Sullivan Stapleton, Eva Green, Hans Matheson, Callan Mulvey, and Jack O’Connell. In between the headache, you get a rush when you see an awkward-yet-fun sex scene between the sidechick and Themistocles. The lone bright spot for this film is the roles of Green and Stapleton. Green did the best job she could with the poor dialogue and script, while Stapleton proved to be a great leader.

SCORE
Junkie XL was the man in charge of placing music to the senseless fighting. The score is very noticeable despite all the sounds of war. I could not picture anything better than the strong beats and dark tone for this movie because listening to Iconic Pop probably would not have worked as well here.

IS IT WORTH IT?
300: Rise of an Empire is a movie that should not have been made as it is a glorified game of Battleship. If you want to watch this movie, I would suggest to watch it under the influence of the same thing that was passed around the Oscars because the movie will speak to you then.