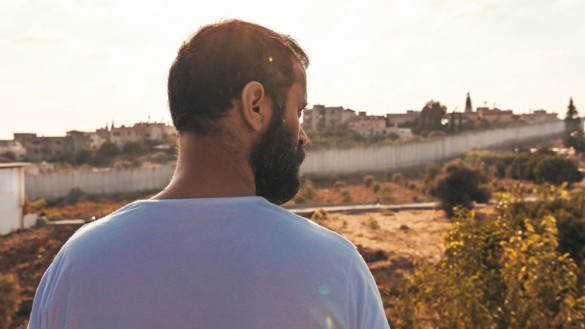 Synopsis: A Palestinian father trapped on the other side of the separation wall is trying to reach the hospital for his son.

Mustafa (Ali Suliman), the father at the center of Ameen Nayfeh’s Palestinian border drama 200 Meters, feels like a man perpetually not whole. He is separated by the Israeli West Bank barrier from the family he loves and the job he struggled to get, and his attempts to establish a permanent home are repeatedly confounded. When security says his ID has expired and he gets word that his son has been hospitalized, he resolves to cross the border by any means necessary. The result is a tense exploration of how individuals can get lost within a punishing system, a story as rich with empathy as it is with anger.

The greatest strength of 200 Meters is its tight, well-written screenplay. The desires and motivations of the characters are well-defined and the conflict does not just come from people stopping Mustafa from crossing the wall, but also from those he crosses it with. There are lots of intelligent turns in the plotting, and the stakes are made clear. For his first feature, Nayfeh has penned an impressive script.

What’s more, Suliman brings his character vibrantly to life, painting Mustafa as an anxious but determined man with a primary goal to be by his family’s side. He spends his nights calling them, making them flick their light-switch on and off so he can see a signifier of their presence across the wall. Even though they’re in his sight, it’s clear there’s so much more than the distance separating them.

Suliman plays Mustafa as effortlessly fun with his children, and instantly concerned if they might be in harm, as seen when his son gets into a fight early in the film when he’s called a “rotten West Banker.” Even though Mustafa has idealized how his life will be when he’s reunited with his family, there are unassailable societal problems that will still affect them. But it’s Mustafa’s sheer commitment to being there for his family that drives his journey, despite him being aware that their lives will still be racked with difficulties.

It’s because of the overarching political stakes that there’s so much tension riding through the film. Mustafa likes to be in control and to do things by the book, shown by his initial refusal to cross the border with smugglers before he’s forced to. Once he gets embroiled in illicit methods, he no longer just has to worry about his own actions, but that of others less careful than him.

As the conflict gets more complicated, so too does the tension. On Mustafa’s arduous journey to reach the border, you’re convinced that any scene could veer into the worst possible outcome. With so much external conflict, and with stakes like Mustafa never seeing his family again, there’s a terror that the precarious calm can be broken easily, and at any moment.

It’s through Mustafa’s eyes we see this tense journey, we share his disapproval of the loudmouth passengers and his skepticism of the German filmmaker exploiting the stories of illegal border crossings for a documentary. In telling a larger political story about a crisis point between two nations, Nayfeh has not neglected to flesh out an engaging, intelligent character, whose smart solutions to nail-biting problems give 200 Meters the feeling of a taut thriller.

But with a film plotted like a thriller, there come some drawbacks. Focusing on tense setpieces means that Mustafa’s character starts to feel a little underdeveloped in his motivations. In addition to this, we don’t learn the true reason of his son’s injuries until near the end of their journey across the border, so the audience just has to trust Mustafa’s severe reaction that his son is in a state where his father needs to get to him as urgently as possible. In this case, giving the audience more information would have helped to ground the action.

That said, looking at a historical and political crisis point exclusively through the eyes of one well-developed character is the right approach to also feel the emotional impact of the story. You’re engaged from start to finish, empathizing with his needs, and impressed at his quick-thinking abilities in the midst of danger. For a first feature, Nayfeh has made a film that is both entertaining and impactful, with a focus that is both broad and personal. He clearly has a lot to say on these complex issues, and hopefully, this won’t be the last we hear from him.