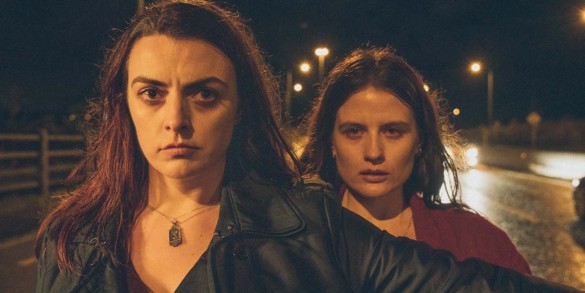 Synopsis: The story of two sisters who grew up on the fractious Irish border. When one of them, who has been missing, finally returns home, the intense bond with her sister is re-ignited. Together they unearth their mother’s past but uncovered secrets and resentments which have been buried deep, threaten to overwhelm them.

Ireland has had its fair share of tragedy. The country was torn apart time and again by English rule various times over the centuries; from Cromwell’s invasion in the 17th century to The Troubles, lasting three decades from the 60s to the introduction of the Good Friday Agreement in 1998. Today there are still battles, the Unionist north railing against the Nationalist south; mostly the peace is kept thanks to the Agreement, but with Brexit looming there is potential for more violence, more bloodshed.

This is the backdrop for Writer-Director Cathy Brady’s first foray into feature filmmaking. It is a fitting one too, given its subject matter. For Wildfire is, ultimately, the story of two sisters torn apart by tragedy, trying to reunite and find some common ground, with varying results. It is an affecting, sometimes chilling tale of a small, unnamed, Northern  Irish border town and the small minds which come with it. It is also an insight into mental illness and how some societies still cannot accept this (especially a town steeped in Catholicism as the one depicted here). It doesn’t always hit the mark, and sometimes it threatens to boil over into mawkish melodrama, but when it works Wildfire is quietly fierce and profound.

Wildfire sees Kelly (played by Nikka McGuigan) return home, traveling across the Irish Sea. She has been homeless for a long time, and it shows: she has a feral intensity, wide-eyed and rangy, as though ready to take flight at the slightest provocation. She is returning to see her sister Lauren (Nora-Jane Noone), a straight-laced woman, respected in her community and married to similarly straight-laced, and tightly woven, Sean (played by Martin McCann, usually excellent but given a back seat here for good reason). Lauren works in an Amazon-style warehouse, and her life couldn’t be more different from her sisters. Nonetheless, Kelly explodes into her life like a bomb, leaving the hapless Lauren desperately trying to pick up the pieces her sister leaves behind in her wake.

It is hard to say quite who is the stand-out here. Nikka McGuigan gets the meatier of the two roles; Kelly is a bombastic force of nature, as comfortable stripping off and diving into freezing cold waters as she is chasing after a truck whose driver has just littered the street. She is completely unpredictable and manic. She is also, it is implied, likely bi-polar. She is compelled to dig her sister’s garden at 5 am in order to plant vegetables; nearly drowns a small child in a lake, and bounds around without any real awareness of the impact she’s having on the conservative township she’s inhabiting. She is also still mourning the loss of her mother, who died in a car crash, and who seems like the progenitor for Kelly’s illness; the sisters’ father died in an explosion set off by the IRA and this sent their mother spiraling into a depression from which it seems she never recovered. Despite, or perhaps because of this, Kelly seems to float in every scene, never quite tethered to reality. She lives in her own world and what goes on in her mind is anyone’s guess. McGuigan’s performance is also tinged with real-life tragedy: the actress succumbed to cancer at the shockingly young age of 33, not long after the production had finished. Wildfire is dedicated to her memory, and the knowledge of her death seems to give her performance an almost haunting, ethereal quality. She is absolutely absorbing as Kelly and deserves the plaudits coming her way.

Noone’s role is the less showy of the two. She has the slightly thankless task of staring numbly as her sister continually perpetuates the actions which bring both sisters into disrepute. Lauren has worked hard for the life she enjoys with her husband, but she is also fiercely loyal to her sister. She feels constantly on edge of breaking down, struggling to keep up with Kelly’s manic energy. Add to this, Lauren is more than aware of the effect Kelly is having on the community, and while Kelly is either blissfully unaware of it or simply doesn’t care, Lauren is deeply affected. One scene shows her in the warehouse as her colleagues, one by one, approach her to ask about her sister. Lauren clearly doesn’t want to talk about it and is disquieted by the morbid interest her colleagues are taking in her sister’s mental illness. Nonetheless, Noone imbues Lauren with plenty of familiarities. She is an empathetic figure, trying to hold two disparate sections of her life together despite their incompatibility.  Perhaps the most impressive scene sees Lauren and Kelly dancing in a bar. The usually demure Lauren lets loose completely, banging and swinging alongside her sister in a strange and sexually charged sequence; close as lovers, writhing against each other, the scene lit with blue filters and filmed handheld. It’s exhilarating and as close as Lauren, and the movie itself ever comes to really let go, aside from the shocking denouement which is best left for the viewer to discover themselves. It’s in this moment that Noone really shines, letting all of Lauren’s pent up frustration and anger bubble to the surface.

The themes of repression and depression, reunion and separation, abound in Wildfire. The sisters grapple not just with each other but with the memory of their mother, and the father who was killed in a political act they don’t feel quite engaged in. At one point they swim in a lake which separates the north and south Ireland. ‘I’m in the North!’ one shouts, ‘I’m in the South!’ the other response. The geographic distance as well as the generational one and the mental one, are always on display.

Unfortunately, Wildfire feels a little too thin at times to really make an impact. For much of the runtime, we witness the sisters as they each try to come to terms with their realities, but this doesn’t happen with much effectiveness. Perhaps that’s as Brady meant it to be, but it requires a little more patience from the viewer than one might expect and the ending doesn’t really pay off in terms of the emotional resonance it was building towards. It’s an engaging movie, but one that doesn’t necessarily reward the time spent with it.