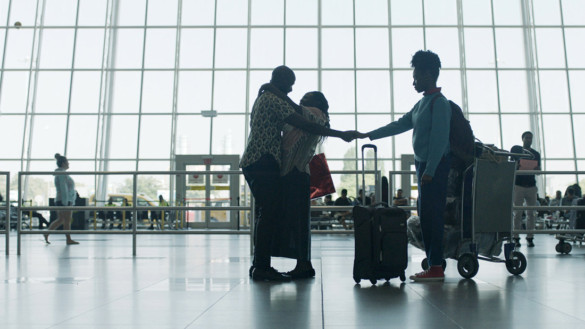 Synopsis: Reunited after 17 years, an Angolan immigrant is joined in the U.S. by his wife and daughter. Now strangers sharing a one-bedroom apartment, they discover a shared love of dance that may help them overcome the distance between them.

What’s special about film festivals each and every year is how they are able to highlight and spotlight relatively unknown actors and filmmakers and demonstrate their talents to a wider audience. Farewell Amor fits this mold, with stars Ntare Mwine and Jayme Lawson giving career-best performances, the type that will surely help get them recognized for future work. Unfortunately, however, there’s only so much great work that can be done with material that doesn’t quite hit the mark, as is the case here with Farewell Amor.

The story involves Walter who has been living in America for a number of years, separated from his wife and daughter because of the civil war in Angola. The family is finally reunited when they come over to live in the States, however, things have changed. While Esther has refused any kind of contact with anybody except her husband, Walter has just ended things with a nurse Linda, and he already begins to feel the guilt. Meanwhile, their daughter Sylvia begins to adapt to her new school life, befriending a young lad known as DJ who shares her passion for dance.

Without a doubt, the strongest aspect of the film is Sylvia and her relationship with DJ. Jayme Lawson’s performance carries the film throughout, with the driving force and most fascination character arc being how she adapts to her new lifestyle. Black-ish star Marcus Schribner is always great as DJ, with the film’s best scenes coming between the pair of them. DJ is mocked in class for his newfound friendship with Sylvia but he doesn’t let it phase him, with the two sharing an interest in dance.

Ntare Mwine also does splendid work, an actor I’m not all too familiar with but certainly won’t struggle for work after this performance. It’s the subtle things that he does so well, such as the early intimate scene with Zainab Jah’s Esther where he can’t bring himself to have sex with her because of the guilt from his previous relationship. So much of his character is told through the eyes – a cliché way to describe a performance but one that’s all too relevant here. His tender moments with daughter Sylvia are also among the best in the film, particularly the pair of scenes at the doctor’s surgery after she suffers an arm injury. Jah also does fine work, but her character has a much tougher exterior than the other two leads, making it harder for her to show the same kind of vulnerability.

Along with the performances, the strongest aspect of Farewell Amor is the camera work. Ekwa Masangi’s direction is fantastic throughout despite a sometimes dwindling script, while Bruce Francis Cole’s cinematography is a particular highlight. Together, the pair capture the tenderness and delicacy of the film’s early scenes, especially how Walter and Sylvia are framed when lost in their own thoughts.

There’s a clunky use of narrative structure at the beginning of the film, as we learn how each of the three central characters spent their first couple of days reunited. Sylvia’s story is of course the strongest but finds itself retreading scenes that we already saw with Walter, making it feel repetitive and slightly unnecessary. It’s a similar narrative style to that of the documentary The Painter and The Thief which I reviewed at the festival just a couple of days ago, however that does a much better job at showing the same events through different perspectives by refusing to rehash the same scene.

The story shows plenty of potential at its start but fizzles out as the film progresses to the point where it doesn’t feel as intimate as it had. The closing scene somewhat recovers it thanks to a warm conversation between Walter and Esther, but it doesn’t come close to the heightened emotion of the first reunion. The opening shot is truly beautiful, as Walter awaits his family members to emerge from the terminal, but it’s the kind that isn’t replicated or consistently repeated. The film’s climax also feels like it fails to hit the emotional punch that it’s aiming for, however, the aforementioned closing scene does do a good job at rounding off the story.

Ultimately, Farewell Amor feels unmemorable. A short while after the film’s conclusion, there’s nothing that particularly sticks with you and affects you. As the film progresses, it feels as if you’re simply observing the story rather than feeling it, as it loses its way and moves on from the character’s adaptation struggles. The performances of Mwine and Lawson are undoubtedly great, but there’s only so much that can be done with nothing more than decent material. Hopefully, there are a few great roles lined up for Lawson in the future as she has the potential to be a real breakout superstar in the next few years.