Movie Review: Michael Bay had the courage to do what was right…make a decent movie with 13 Hours 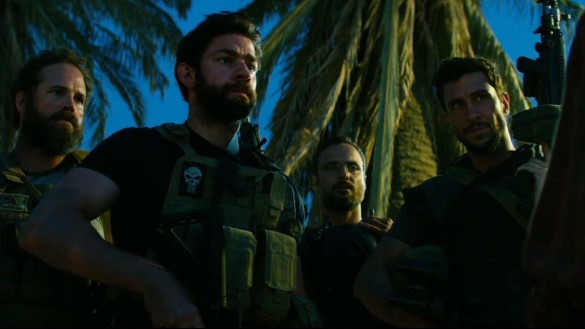 Synopsis: An American Ambassador is killed during an attack at a U.S. compound in Libya as a security team struggles to make sense out of the chaos.

We all know the name Michael Bay; whether you like the name or not is, well, entirely up to you (and I’m sure most of you loathe the name with every ounce of passion you have). My relationship with his filmography is very love/hate, and when he finds the time to exit the realms of the Transformers universe, I’ve seen him churn out some good work (except for Pearl Harbor). This is why, despite the release of a Bay film in the middle of January, there was a lingering curiosity and interest in giving him a shot. So what happens when Mr. Bay decides to tackle something serious for once? Well, the results are actually pretty good.

13 Hours tells the story of what occurred in Benghazi in the weeks leading up to September 11, 2012, when Libya was in a state of violence and revolution after the overthrow of their dictatorial leader. It focuses on the small group of skilled CIA security contractors, called the G.R.S., assigned to protect the last remaining U.S. outposts in Benghazi, including the American diplomatic compound housing the U.S. Ambassador and the nearby CIA annex. But when Islamic radicals and militants overtake the compound and soon make their rounds over to the annex, it becomes apparent just what we were up against, and how oblivious we were to the repercussions of this revolution. It is here where this film elevates itself over your typical Michael Bay fodder, but more on that later.

To start off, Bay essentially spends the entire first half building his characters, and while many of the tropes feel a bit “been there done that”, he is working with such a good script by Chuck Hogan and great actors that help mask the clichés well. James Badge Dale and John Krasinski are quite incredible in this film; sure, they are all family men in typical war film fashion, but the moments they are given to express their fatherly guilt are surprisingly poignant and well earned, also thanks to Hogan’s fine ability as a writer. Where his writing also continues to shine is in giving all six of the G.R.S. soldiers distinct personalities and desires; their banter and humor feels natural, and their frustrations in playing simple security for these outposts is also authentic and continues to play into the film thematically. At about the midpoint of this film, I had forgotten this film was actually directed by Michael Bay; I’d say that’s a good thing.

Once the attacks on the compound and annex occur, Michael Bay begins to rear his ugly head a little. The action becomes repetitive and a little monotonous when it should feel exhausting and visceral. Now there are indeed some arduous moments in these sequences, and they do work well surprisingly, but it’s in the moments of subtlety and character pathos that bring these forth, and it is actually where Bay begins to show his hidden craft as a director, as many of these moments are surprisingly well balanced amidst the chaos on screen. The aesthetic influence to films like Black Hawk Down are indeed noticeable (heck, Black Hawk Down is even directly acknowledged in this movie), but Bay intelligently spends enough time developing his characters and themes to make us care, which ultimately makes the film’s climatic sequence surprisingly well earned.

Speaking of the film thematically (I did say above “more on that later”, so here we are), 13 Hours is a tale about unknowing and obliviousness, driven home by a small group of “secret soldiers” who did indeed know more than they were given credit for. We, as in the U.S. involvement in Libya at this time, were cynical in thinking the revolution had ended at the overthrow of Libya’s dictatorial leader, unprepared in knowing what repercussions lie ahead in the face of such a revolution. This allows the film to build some thematic tension and a surprising commentary on our involvement in oversea threats, but Bay never exemplifies the “evils” of these Libyans, in fact the villains here are predominantly faceless, and it is never clear to us as viewers or the G.R.S. if these militants are friendlies or not. Bay intelligently avoids the politics, which allows the film to make its argument in a more independent light, and that earns my respect. Regardless of how you view these events politically, and the film allows you to do that, ultimately (and unfortunately) Libya has now become a failed state, and a station for ISIS.

13 Hours is proof that if Michael Bay wants to take something seriously, he does have the skill to do so. Okay, sure, many of his trademarks are still ever present (slow motion action shots, sequences involving the American flag, etc.), and his frenetic action filmmaking does overstay its welcome at times in the back half, but where he falters he surprisingly makes up for in wonderful character building, political open-mindedness, some genuine tension, and most importantly, heart. You learn to feel pain with these characters, you hope for their survival and return home, and for the most part you ultimately feel like you went on this harrowing journey alongside them, and even got to know them in the process. That cannot be said for someone like Sam Witwicky.