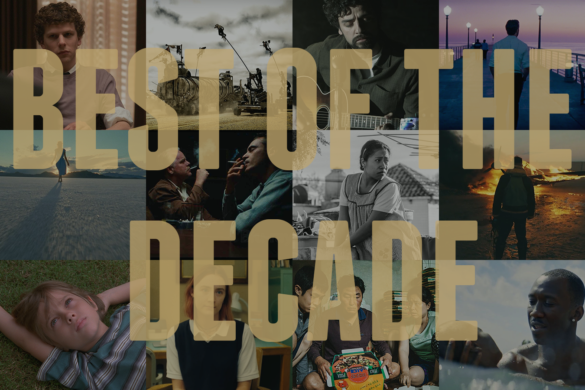 This week on the InSession Film Podcast, it’s all about the best of the decade! We feature an abridged version of our annual Awards show discussing the very best that film had to offer last decade, and we top it off by revealing our Top 10 Movies of the 2010s!

It was a stellar decade for film and we had a really great time celebrating the last ten years. Some of you may remember that InSession Film launched in 2013, so we were able to cover most of the decade in real time, while catching up with many great films that 2010, 2011 and 2012 had to offer over the years as well. It’s somewhat surreal to see the decade close as we move on to the next chapter, but before we do, we had one last ride reminiscing on the greatness we witnessed in film in the 2010s.

Best Use of Soundtrack Music

– Notes (1:34:23)
As noted on the show, be on the lookout for our Patreon Bonus Content this week as we discuss our “unique” categories that we skipped during our Best of the Decade awards. We hoped it would save some time given everything we needed to get through, but we still wanted to go over those categories, and we figured Patreon was the way to go. Stay tuned for that!

– Top 10 Movies of the 2010s (1:50:03)
As noted above, it was a fantastic decade for film, so narrowing down this list to just 10 films, or even 20 if we’re including honorable mentions, was no easy task. We spent countless hours dissecting our year-end lists attempting to piece together the perfect Top 10 for the 2010s. Hopefully we didn’t let you all down.

– Music
About Today – The National / Mark Isham
The Moon Song – Karen O.
The Return of the Eagle – Atli Örvarsson