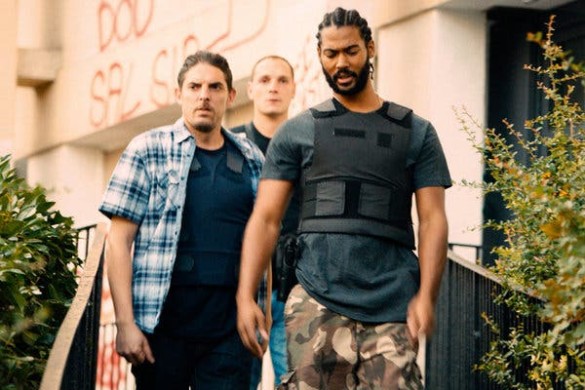 Synopsis: A cop from the provinces moves to Paris to join the Anti-Crime Brigade of Montfermeil, discovering an underworld where the tensions between the different groups mark the rhythm.

The audacity! The sheer audacity of Ladj Ly to bestow upon his film the same title as one of the all-time most famous works of literature… That’s the sort of confidence I’m trying to bring to my 2020.

Les Misérables won the Jury Prize at the Cannes Film Festival last spring, and the film went on to receive an Oscar nomination for Best International Film, since France’s Minister of Culture chose it to represent the nation with the Academy instead of Céline Sciamma’s much-beloved queer masterwork Portrait of a Lady on Fire. The vehemence from many of the online opinion-havers was pretty venomous when that announcement was made, but the decision actually makes a lot of sense.

Ly’s film is incredibly timely, not just for France specifically but also for Donald Trump’s America—and the planet at large for that matter. The world is a highly turbulent place right now and already has been for a while; white nationalism and xenophobia are on the rise. But remember that so much of what fuels and aids this deep-seated hatred is systematic and long-established. For generations, laws and enforcement agencies have been consciously designed to maintain the status quo by “legally” oppressing minorities, immigrants, and the rest of the under-privileged.

So, for a people that nearly elected the out-spoken Islamophobe and outright fascist Marine Le Pen in 2017—only one year after America elected our own—it figures that this generation’s great revolution would center on fighting back against the institutions of which the Le Pens, the Trumps, and all those they empower are a symptom.

I’m sure we, as Americans, often think of the abhorrent issue of police brutality as something uniquely ours. Something that mustn’t happen elsewhere. Certainly not in places like western Europe. And yet… Ly is here with a stark existential reminder that the fight for social justice rages on everywhere, that the fight for human rights definitely did not end in the 18th century anywhere, that the fight to escape poverty and persecution will remain altogether futile… until the people come together and revolt once again.

Les Misérables plays out like something akin to a French The Wire. Ly paints from all sides of the canvas and moves his brush freely from corner to corner. Unfettered cops. Disenfranchised civilians. Outraged adolescents. Empowered superordinates. Together, they produce a painful mosaic of ongoing human strife in an environment that fortifies a few and crushes the rest…

Ly’s opening is ironically triumphant. For a brief moment in time, a nation is unified as France wins the World Cup. Crowds of people cheer and celebrate the victory in front of the Eiffel Tower—an architectural marvel meant to observe a hundred years since the Revolution and demonstrate France’s modernism. (Acerbic, no?) But then the mood settles and it’s all downhill from there, as the country redivides and the people return to their stations.

In order to tell this upsetting story, Ly utilizes an in-yer-face style of cinéma vérité that feels thoroughly appropriate for the substance of this narrative—it adds to the film’s sense of overdue urgency. Ly and company’s unencumbered zeal almost calls for an evocation for a new French New Wave. All that electricity behind the camera and in the editing room is naturally illustrated on screen in the form of the filmmakers’ own energy. Ly’s direction is something that quick-to-label critics might deem as uncontained. But, rest assured, he is undoubtedly in complete control of his chaos from start to finish.

The movie’s virtually parabolic intensity balloons and layers by varying degrees with every instance of neighborhood conflict until the gripping-as-hell final act, which is the very definition of visceral—concluding on quite a chilling note. (When the picture ultimately cut to black, I instantly saw my own face reflected back on the screen. Stunned at what I’d just witnessed. As if I needed to be reminded.)

Folks eager to watch a garden-variety retelling of the classic novel will likely be disappointed, though. Likewise, so will folks keen to play a game of Spot the Similarities. Because what these stories mainly have in common, aside from their titles, lies within their cores—a common message and general mood, not much else. Thus, moviegoers willing to let this film speak for itself will probably be more prone to being consumed by it.

Because Ladj Ly’s Les Misérables, in its own way, lives up to its namesake. On the surface, the film has seemingly nothing to do with Victor Hugo’s magnum opus. It doesn’t share character facsimiles or plot structure, not even in an emblematic way. Consequently, Hugo doesn’t receive a writing credit of any sort. Ly and his co-screenwriters merely—boldly—lifted the title for their own tale of gross social imbalances, abuses of power, and class warfare.

Personally, I would have picked Portrait of a Lady on Fire to represent France at the Oscars, but it’s easy to see why this film was selected.

After all, it’s disconcerting how relevant Les Misérables is, isn’t it? Which one am I talking about? You pick.