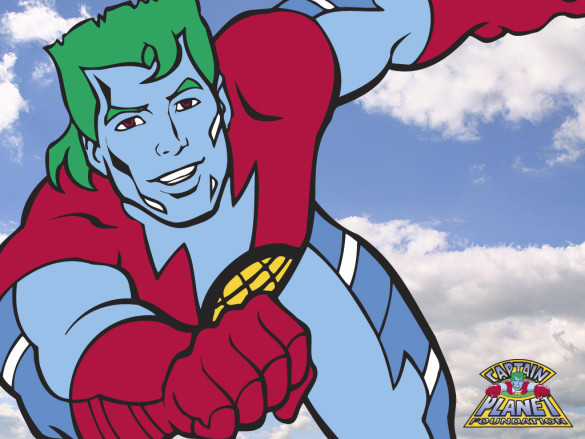 Well with some exciting news, reports are coming in that Sony is in final negotiations to pick up the rights to the 1990’s series Captain Planet and plans to bring it to the big screen. The movie will be produced by Mark Gordon, Don Murphy and Susan Montford. In case you missed out in the early 90’s, Captain Planet revolves around five teens around the world that are given powers by Gaia, the Earth spirit, in order to protect the plant from devastation. When their powers are not enough, the teens get together to summon the awesome-themed superhero Captain Planet. The Captain and the Planeteers fought villains such as Dr. Blight, Verminous Skumm, Duke Nukem and Looten Plunder.

As far as our producers go, Gordon is well known for producing movies such as Speed, Saving Private Ryan, 2012 and many others as well. He is also the executive producer behind shows such as Grey’s Anatomy, Criminal Minds, and the upcoming Ray Donovan. Murphy, one of the producers behind The Transformers mega-franchise, and Montford are in production on Vampire Academy, the adaptation of the YA novel by Richelle Mead being directed by Mark Waters.

This franchise has had a few attempts in the past to garner some live-action fun but it never went anywhere. As for kids who grew up in the 90’s watching this show, I think it’ll depend on how the movie is executed to bring back those fans. The show was kind of cheesy and didn’t have the super villians we’ve seen in other films and cartoons such as Spider-Man or Batman. I’m half on board for this but we’ll see what happens.

What do you think? Let us know in the comment section below!