Movie News: A sequel to This is the End? 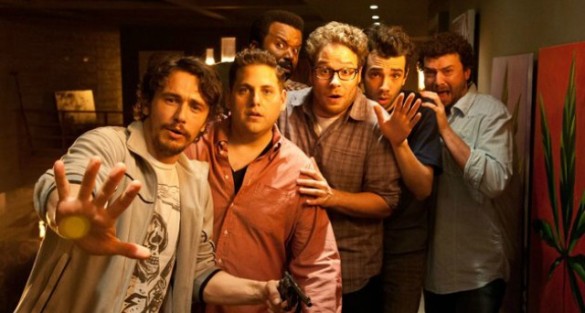 So, if you got a chance to see This is the End, then you’ll know that a sequel doesn’t quite make a whole lot of sense. Without giving spoilers away, the way it ended was great and pretty funny if you ask me. That being said, it’s being reported that Evan Goldberg is saying that there is a very meta-concept in the works for a sequel where the movie will take place at the premiere of the movie This is the End. Here are the words from Goldberg himself:

If you ask me, I’d say there’s a good chance of sequel. If you ask Seth [Rogen], he’d say no. So, we’ll see. The guys are up for it but we lucked out that they were all available. I honestly don’t know if we could get the guys together. We actually talked about doing a sequel where it starts at the premiere of This is the End. Seth’s a cokehead in this version, Michael Cera is a calm dude with a boyfriend, Rihanna and The Backstreet Boys are back. We have a lot of ideas: a heaven and hell, for example, and a garden of Eden version where Danny [McBride] is Adam.

I’m not the biggest fan of meta but when it’s done right it could be really good and in this environment of making fun of themselves it actually makes sense. I like the idea of these guys playing exxagerrated versions of themselves and it did okay at the box office so I’m guessing other people did too. The film has doubled it’s budget so far and hasn’t hit most of the international markets yet so this will end up being a pretty big success for them. Assuming they can work out their schedules, this will most likely end up happening. And honestly, I’d like to see more of McBride is this kind of role. He was amazing and was one of the better parts of This is the End so seeing him as Adam in the Garden of Eden would be interesting to say the least.

What are your thoughts? Is this a good idea?