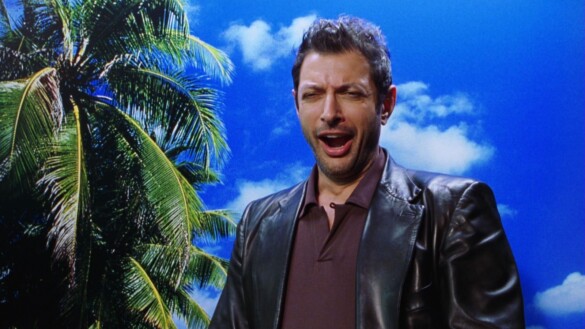 Synopsis: A research team is sent to the Jurassic Park Site B island to study the dinosaurs there, while an InGen team approaches with another agenda.

How was Steven Spielberg going to follow up Schindler’s List? After enjoying one of the most spectacular years for a director in history—1993 giving us Jurassic Park, one of the biggest, most significant blockbusters ever, and Schindler’s List, the three-hour Holocaust drama that finally earned Spielberg a Best Director Oscar—he took a few years to decide what his next project would be. Ultimately he chose the safe route, going with a movie that would have been successful regardless of its quality. And what he gave us in May 1997 was a definite dip in quality to be sure. The Lost World: Jurassic Park is one of the weakest efforts in Spielberg’s fifty-plus career in film.

The most frustrating element of the film is that it had the makings of greatness, many decisions the right ones, a couple of action scenes beautifully shot and well-paced. It was the right choice to bump Jeff Goldblum into the lead role, as  Ian Malcolm was one of the best parts of the 1993 original, and the centerpiece suspense sequence of two T. rexes attacking a trailer and knocking it off a cliff is a great one. Up-and-coming actors of the time do solid work, like Julianne Moore as Sarah Harding, who was months away from her first Oscar nomination for Boogie Nights. And Vince Vaughn, hot off his charismatic performance in Swingers, is a good addition to the cast, if given little to do overall.

When I saw the film opening weekend at age twelve, I adored that the final act takes the T. rex to San Diego and has the dinosaur trampling down a busy street like Godzilla, but twenty-five years later, I now point to this final sequence as the main problem with The Lost World: Jurassic Park—the film is overstuffed with too many characters and ideas, without the clear, engaging throughline of the original. You don’t feel the passion of Spielberg in this one, his only real sequel he’s made in his career (if you don’t count the Indiana Jones franchise as a series of sequels). There was a long gap between films, and he likely took this on to prove he could still deliver a successful blockbuster; indeed, The Lost World: Jurassic Park earned $618 million worldwide, the second highest grossing film of 1997 after Titanic. But while making the movie, he was already thinking about his next, more meaningful projects—Amistad and Saving Private Ryan, both released within the following fourteen months.

The other character that still doesn’t work is Ian’s daughter Kelly, played by Vanessa Lee Chester, who takes on essentially the role of Tim and Lex but always feels awkwardly shoved into the narrative. The problem isn’t Chester’s performance; she’s fine, but the character is too underwritten to ever care about, and the reveal of her gymnastics abilities in a silly, supposedly-applause-worthy moment with a velociraptor is actually one of the movie’s most groan-worthy moments. Annoying kids were a big part of the 1997 action movie landscape—think the deaf girl in Speed 2: Cruise Control—and the addition of Kelly in The Lost World: Jurassic Park didn’t do the film any favors.

If it had been possible, Spielberg needed to get the two main actors from the original back to go on this journey with Goldblum. Although we do get cameos from Sir Richard Attenborough as John Hammond, Joseph Mazzello as Tim, and Ariana Richards as Lex, the absence of Sam Neill as Alan Grant and Laura Dern as Ellie Sattler is deeply felt throughout the second installment. Their compelling relationship, mostly due to Alan’s lack of paternal feelings, plays a big role in the success of Jurassic Park, and the relationship between Ian and Sarah doesn’t have the complexity needed to carry a two-hour movie. It’s the character work more than anything that’s missing in The Lost World: Jurassic Park, and although our pre-awareness of Ian helps in this matter, even he is less interesting in the sequel, not as witty and sarcastic, more the standard action movie hero.

We’re on the cusp of Jurassic World: Dominion, which after twenty-nine years finally brings back the original trio of Sam Neill, Laura Dern, and Jeff Goldblum; we’ll finally see what it’s like to have these three together again. As flawed as Jurassic Park III is, seeing Neill and Dern briefly interact was a thrill, and Neill’s performance in the third installment is a great one, his welcome presence making that movie a worthwhile endeavor. He and Dern are sorely missed in The Lost World: Jurassic Park, a film that has its moments, which includes some terrific action and visual effects, but overall remains one of Steven Spielberg’s most disappointing and disposable entertainments in a mostly impressive career.