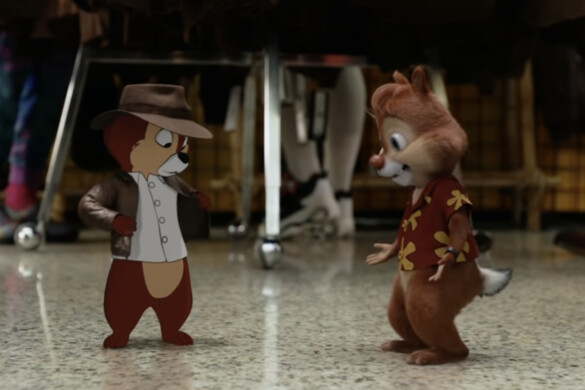 Synopsis: Thirty years after their popular television show ended, chipmunks Chip and Dale live very different lives. When a cast member from the original series mysteriously disappears, the pair must reunite to save their friend.

I’ll get this out of the way: without The Lonely Island at the helm, Chip ‘n Dale: Rescue Rangers might have been one of the worst IP-driven pieces of content ever made. I feel there’s nothing more egregious than having pre-existing Intellectual Properties inside a movie that doesn’t warrant it just for the audience to point at things they know. The worst scene in Free Guy had two sub-Disney IPs shoved in a two-minute “moment” (plus a cameo to signal the audience that, yes, the movie is in on the joke), but had no emotional connection to anything happening in the actual movie.

There are lots of IPs in Chip ‘n Dale—perhaps too many. There are times when it doesn’t work, but these moments are so few and far between that I was actually surprised at how many times I was in stitches during the entire movie, whether it was from the weirdest cameos possible, or from the incredible chemistry John Mulaney and Andy Samberg have as our titular characters. If someone else, say, Shawn Levy, was at the helm of this, it likely wouldn’t have been as funny, and as visually exciting as what director Akiva Schaffer and cinematographer Larry Fong bring to the table here.

Fong is a strange pick for director of photography, having previously worked on Batman v. Superman: Dawn of Justice, Watchmen, Kong: Skull Island, and The Predator. But you can clearly see why Schaffer picked him as a cinematographer when the action scenes start to happen; there’s real geography (and color!) inside each and every frame. Fong knows where to place his animated and live-action characters for maximum visual effect, and whenever they interact with one another, everything feels so seamless to the audience, and fun to see such interaction inside the film’s meta-world.

And it’s a damn shame that this movie wasn’t released in theaters. It’s rare nowadays to see a family film with such creativity, both in front and behind the camera, so it would’ve really benefited from the theatrical experience. Such a special movie doesn’t deserve to be put on streaming, especially when it’s the closest thing this generation will get to Who Framed Roger Rabbit? Of course, it doesn’t reach the same levels as Robert Zemeckis’ movie, but it is one heck of a fun time at the movies and seeing it on a TV screen feels criminal for a movie that celebrates the best that the Rescue Rangers show has to offer, inside a modern, extremely meta-setting that will produce big laughs for small kids, who will enjoy Chip ‘n Dale’s antics, as well as for adults who will understand most of the references the movie throws at them.

I believe that’s part of the reason why I enjoyed the movie so much: the adult jokes are funnier than the kid ones, but the movie deftly balances both types of humor in such a way that everyone will laugh at anything they want to. The movie is brimming with so much creativity that it’s hard not to laugh at some of the wildest cameos you’ll see all year. But even without them, the movie is a complete riot, because it retains the carefree spirit of the original Rescue Rangers TV series.

A huge grin was on my face when we first see Chip and Dale meeting together again, as Monterey Jack (Eric Bana) seeks help, with Chip (Mulaney) being hand-drawn, while Dale (Samberg) is in full 3D. The animation effects are great, with the movie constantly utilizing different animated techniques inside a rich, and fully-realized world where literally anything is possible, and anyone you know (even the ones you’d like to erase from your memory) can appear. Chip and Dale investigate the disappearance of Monterey Jack, from Sweet Pete (Will Arnett), a washed-up Peter Pan who now dedicates his life to creating a bootlegged version of animated movies, by modifying the original characters’ appearances.

The caper itself is a riot to watch. There are too many surprises to reveal here, but let’s just say that fans of the Rescue Rangers series will be more than satisfied, especially when the movie brings back the series’ iconic characters, Gadget (Tress MacNellie) and Zipper (Dennis Haysbert) for the climax. Mulaney and Samberg bring out their A-game, and there are plenty of scenes where their chemistry fires on all cylinders, particularly one where they rap about whales (classic Lonely Island). The supporting cast is also in on the joke, with J.K. Simmons’ Captain Putty, a claymation Police chief, and Seth Rogen’s Bob, a Beowulf-esque motion-captured character, being the film’s highlights.

But the movie does falter with his antagonist. The movie bases the character on Bobby Driscoll’s personal life. The child star, who starred in Treasure Island, and played Peter Pan in the 1953 film, was fired from Disney after he reached puberty, which led to him being addicted to hard drugs and subsequently dying of an overdose, with his body found on a deserted cot in a New York City street corner by two boys who were playing there. His mother only found out about his death a year later. In his own words: “I have found that memories are not very useful. I was carried on a silver platter—and then dumped into the garbage.” What does Sweet Pete say? “Then I got older, and they threw me away like I was nothing. I was scared, desperate, and all alone.” When I found out that Arnett would be playing Sweet Pete, I didn’t think that the similarities between his character and Driscoll’s life were intentional.

That changed when I saw the movie and Pete paraphrased the exact thing Driscoll did a few years before he died. It not only feels extremely disrespectful to Driscoll’s legacy but also leaves a bad taste in our mouths when we realize that Disney likely approved this before production began. The studio is essentially admitting that, yes, they were responsible for Driscoll’s decline and eventual demise from drugs, throwing him away like he was nothing because he was going through puberty…like every single human being will inevitably go through as they grow up.

Had the movie included another antagonist and removed the Driscoll storyline from Chip ‘n Dale: Rescue Rangers, it likely would’ve been one of the greatest live-action/animation hybrids I’ve ever seen. Because if you remove this entire storyline altogether, you get an insanely fun animated adventure with brilliant vocal performances, sharply written humor, and the most unexpected cameos you’ll ever see in a Chip ‘n Dale movie (even if some of them don’t always work), through another expertly shot production from Larry Fong who has solidified himself as one of the best working cinematographers of our time. There’s lots of fun to be had in this movie, and if you’re a fan of Rescue Rangers, and animation as a whole, you will be more than satisfied. Now here’s a franchise I wouldn’t mind continuing with endless sequels and spin off series, if only the films would be released in theaters though.