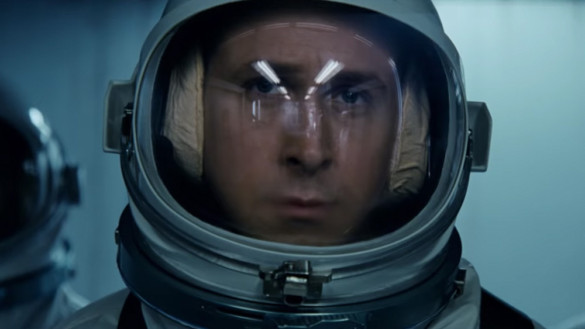 Synopsis: The film tells the riveting story of NASA’s mission to land a man on the moon, focusing on Neil Armstrong and the years 1961-1969. A visceral, first-person account, based on the book by James R. Hansen, the movie will explore the sacrifices and the cost—on Armstrong and on the nation—of one of the most dangerous missions in history.

If First Man is any indication, Damien Chazelle REALLY wants that elusive Oscar he lost out in a few years ago. The Neil Armstrong flick starring Ryan Gosling is basically award season catnip, deliberately designed within an inch of its life to appeal to both audiences and critics alike.

That’s an observation, not a criticism; the film is damn good. Focusing on the time when Armstrong (Gosling) and his family move to Houston to prepare for the Apollo missions in the early 60s, First Man is an immensely self-assured balance between thrilling space adventure and introspective family drama.

The specter of death looms large over the entire film. The film opens with Armstrong on a mission that nearly sees him float uncontrollably out into space (the words “skipping on the atmosphere” should never be uttered aloud) and then immediately cuts to Neil saying burying his daughter Karen after she dies from cancer. In this way First Man announces its dual priorities by establishing a link between space exploration and death.

As the titular first man on the moon, Gosling is impressively understated and introspective. Neil keeps most everything beneath the surface, remaining silent about Karen’s death even to his patient, supportive wife Janet (Claire Foy, mostly wasted in the role of dutiful partner). Still, it’s not hard to see how the failures and the deaths of many of his fellow astronauts impacts Neil. And there are many: the body count in First Man may actually rival that of a horror film.

Chazelle is very smart in the way that he uses the camera to distinguish everyday life from space flight. He shoots the “action scenes” of the rockets taking off and in space with a handheld camera and in close-up to ensure the experience is as claustrophobic and nerve racking as possible. Considering that audiences know the outcome of the mission before a single frame is projected, it’s incredibly impressive how much tension Chazelle packs into the film.

Ultimately there’s little doubt that First Man will be a major success – it ticks all of the boxes, appeals to both popcorn movie fans and cinephiles and is technically sound enough to wind up on the Academy’s radar. Expect to hear a great deal more about the film when it opens in early Oct.