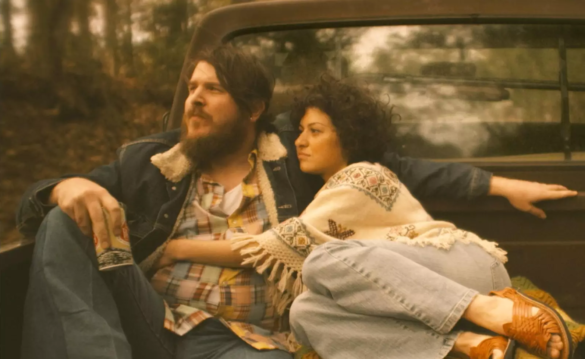 Musical bio-pics are films that we claimer to, with their unique perspective of the artist and the music that we have grown the love throughout the decades of content brought forth by said musician. But while most of the films about musicians we know are mostly safe and conventional, it’s the ones about the forgotten figures in music history that give us more insight into the mind of a musician, leading the audience compelled by what they have seen. Films like Inside Llewyn Davis and Born to be Blue give us thought provoking introspection into segments of fictional and nonfictional characters, and show us the real hardship of what it takes to be a musician – especially the baggage that life carries. In steps the new film Blaze by actor, now writer-director, Ethan Hawke, that blends together of a perfect Texas cocktail of old school music bio-pic film ideas with the thought provoking moments of movies we have seen come out within the last couple of year that are breaking the mold.

Blaze follows the life of country-blues musician Blaze Foley told in three nonlinear sections. The first follows Blaze (Ben Dickey) recording a live album in a small honky tonk bar that he plans to send to Merle Haggard for him to hear his music but also the story of his life. While this is going on, we get look backs to the main story of the film which follows Blaze’s love affair with the love of his life Sybil Rosen (Alia Shawkat) and how she inspired him and his musical career for better or for worse. While this is going on, we are also cutting back to an interview with two of Blaze’s friends (Josh Hamilton and Charlie Sexton) that fills in the holes of the remaining parts of Blaze’s life. The information gathered in all three sections amount to a messy life full of heart break and despair but that is the point, Blaze’s life is not a perfect one, just like many artists before and after that have left this Earth. He comes from a family of alcoholics and broken hearts, led by his father, briefly played by Kris Kristofferson, who barely remembers who Blaze is unless Blaze is playing his music. His relationship with his sister is strained and that becomes a common theme for anyone that tries to get close to him in his life, leaving his songs as the only memories he has of Sybil and the time they had together.

The music is what defines Blaze and yet it is his downfall, causing it to lead to be his own destructive tornado and lose just about everything in his life. Just like Llewyn in that Coen Brother masterpiece, the decisions Blaze makes throughout his life haunt him and led him down a road where there wasn’t much coming back from. The two films are like wild brothers of each other but the thing that makes Blaze’s story more layered is that we get an origin story of how he became who he was in the scenes with Sybil in the tree house, the parts that were taken directly from Rosen’s novel for which the film was inspired by. We see how the man rises from nothing and give shown by the woman he loves that he can make it in this crazy world of music, only to see it backfire and lay to dust his chance of happiness in this world. His music was his weapon and his curse and we see that played out beautifully throughout the film.

Hawke, who earlier this year turned in one of the most thought provoking, transformative performances of the year in First Reformed, gets Dickey, a friend of Hawke’s for the last twenty years who had no acting credits to his name before making this film, to give one of the rawest performances I have seen someone give within film this year. Dickey brings all the emotional turmoil and devastation someone can go through within not being every good enough to get out of their own way and make music that Dickey must have struggled within his own musical experiences in order for it to feel so real on the screen. Dickey is helped by a mostly great screenplay by Hawke and Sybil Rosen, whose realistic approach to the character make it seamless for Dickey to step in and transform into this music legend. The supporting cast is pretty good but is mostly out shined by Sexton, who brings songwriting legend Townes Van Zandt to the screen with so much unpredictability, you have no idea where this performance is going to go next. Sexton, together with Dickey performance, elevated this film into a different conversation than standard music bio pics.

The direction and the editing are the unsung hero of this film, and with the films nonlinear structure, it could be really easy to lose track of the story but you never feel lost. You feel like you are in a more than capable hands which is a little unreal considering that Hawke really hasn’t directed a lot of films over his career. While at my screening, Hawke talked about being influenced a lot when making this film by the style of his longtime collaborator and friend Richard Linklater. His comments made a lot sense because of Linklater’s knack of character development and the master of making his characters feel as real as possible, which I felt a lot when watching this film. But while Hawke has made a very good film here, there is only one problem to it, and that the film doesn’t know how to end. The last twenty minutes of the film, while moving and heartbreaking, is a jumbled mess that does drag along for a while, leading me to wonder if they had multiple endings and just used them all. That being said, Blaze is a very unique story and experience and proves that Ethan Hawke doesn’t just have to act in order to impress audiences.