Featured: Through the sewers of Vienna searching for ‘The Third Man’ 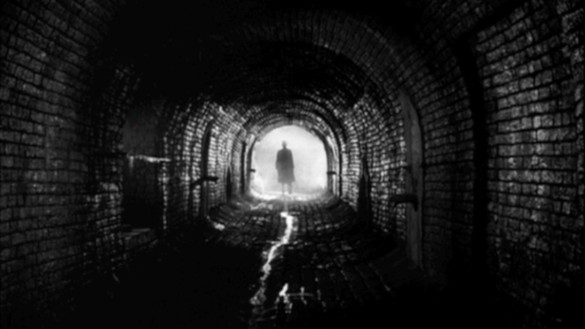 In 1999, the British Film Institute named The Third Man the greatest British film of all time. A story of moral corruption, we are thrown into the streets of an occupied Vienna four years after the war where it is every person for themselves, yet the protagonist discovers this the hard way upon arrival. As a masterpiece, it establishes the core of noir – an innocent man who finds himself caught up in a serious crime – creates a city that is a character in itself, and brings out perfected performances in everyone through the maze of uncertainty.

American author Holly Martins (Joseph Cotten) has been invited by his friend, Harry Lime (Orson Welles), to Vienna for a job opportunity, only to discover upon arrival that Lime was killed by a truck as he crossed the street. At his funeral, he crosses paths with Lime’s lover (Alida Valli) and a British Army police officer (Trevor Howard), who informs Holly his friend was under investigation for a major crime, but Holly doesn’t believe it. Staying in Vienna to seek the truth of his friend’s death, Holly uncovers a web of lies and deceit that puts him in the crosshairs of both the police and shady men who want it all quiet.

Visually, it was thought of as distracting when released. The film consistently presents itself in a Dutch angle many times, from a mild tilt to a half-tilt, conveying the uncertainty and twists the story gives us consistently. Director William Wyler sent a level to director Carol Reed with a note: “Carol, next time you make a picture, just put it on top of the camera, will you?” But the story throws us into the mill within the first few minutes, when we learn of Lime’s death and Holly questions the nature of it and if there was anything sinister about his friend. Robert Krasker’s Oscar-winning cinematography exposes the bleakness of Vienna and takes inside the mind of our characters during the action and provides the city’s bleak atmosphere a scent of despair.

Graham Greene was already a noted mystery author when he began shifting his energy to screenplays, adapting his own works to the screen and making hits with Brighton Rock and The Fallen Idol. With The Third Man, he had already started to write the novella when he agreed to adapt his unfinished story for producers Alexander Korda and David O. Selznick. Having visited occupied Vienna for inspiration, Greene utilized stories of the black market, concern of Soviet influence, and the ruins of the city as a brilliant backdrop. The famous climax at the end is quite notable because of Vienna’s sewers being that wide and such a labyrinth that Reed wanted to shoot inside, but Welles refused to get in.

Speaking of Welles, this was a major marker in his extraordinary career, especially coming after the RKO fiasco making Citizen Kane (American Film Institute’s #1 movie) and The Extraordinary Ambersons. His first appearance in the film, exposed by a bedroom light across the street, features a very noticeable shot of his grin towards a stunned Holly before fleeing the scene. It’s a supporting role, yet it is he who drives the story, especially when he meets Holly again at the Ferris wheel, the Wiener Riesenrad, and says hello in the bemused, condescending charm that only Welles could have pulled off. It is all wrapped up as they leave in which Lime presents his explanation that while Italy was submerged in war, they produced legendary artists, but in peaceful, democratic Switzerland, it only produced the cuckoo clock. To him, it is better to profit from one’s misery compared to having harmony where there is nothing to be gained.

It is a traditional film noir set in a city where everyone from everywhere meets. People go high on and low on the mouse hunt for who is the third man and why is he a mystery. But under the guise of Carol Reed (who would win an Oscar for directing Oliver!) and author Graham Greene, it unfolds as something bigger and something more raw with its actors plus an unforgettable zither score by Anton Karas, who was found playing in a beer hall. A masterpiece that has aged to the high regard it holds today, The Third Man turns 70 next year, but why wait till then to celebrate its greatness now?