Featured: The People Have Spoken – Toronto’s Best Choices (Plus An Epilogue) 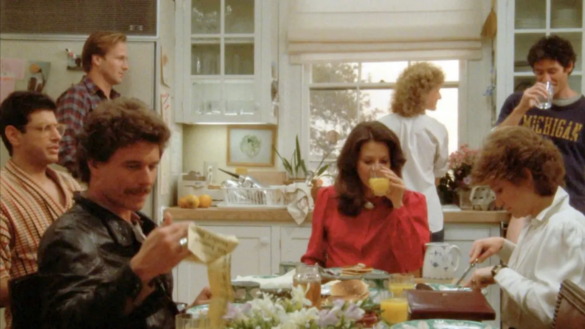 Last year, the audience picked Green Book as the favorite film in the festival, starting its roller-coaster run to the Best Picture Oscar that many wish to forget about. Fair enough, let’s focus on the winners that made an everlasting impact; apologies to Thee Billboards Outside Ebbing, Missouri and The King’s Speech. The festival began in 1976 but introduced the People’s Choice Award in 1978 to the American indie film Girlfriends. (I have a section on the bottom about this film.) What started in a hotel has now expanded into different movie venues, starting with the new TIFF Bell Lightbox, covering one city block in Toronto’s media and entertainment center fitting for the world to come by. And these winners below signal why Toronto has been a big deal.

Lawrence Kasdan was writing for George Lucas while directing his own adult work with the noir Body Heat and his dramedy about old friends, the baby boomers, who get together to mourn the loss of one of their own (played by Kevin Costner, who was cut from the film) while reconnecting on the stuff that made them friends in the first place. William Hurt, Glenn Close, Kevin Kline, Tom Berenger,  Jeff Goldblum, Mary Kay Place, Meg Tilly, and JoBeth Williams get together and rekindle what had been abandoned years ago to an eclectic soundtrack including Marvin Gaye, The Temptations, Aretha Franklin, Three Dog Night, and The Rolling Stones. And while Kasdan’s writing to Raiders Of The Lost Ark and Return Of The Jedi brought in the big bucks, The Big Chill earned Oscar nods for Best Picture, Original Screenplay, and Supporting Actress for Glenn Close.

Inconceivable! But, yes, Rob Reiner’s classic fairy tale from the great William Goldman won at Toronto and became a permanent feature in our culture with its charm, humor, and Andre the Giant being so damn adorable compared to his tough-guy WWE persona. Cary Elwes, Robin Wright, Mandy Patinkin, Peter Falk, Chris Sanderson, Billy Crystal, Wallace Shawn, and  Christopher Guest are the characters of a different narrative style, a parody of the genre with the grandfather telling this who his grandson (Fred Savage) rather than a young girl who would appreciate it more. But the boy’s interest in having it told again is part of the cross-age and gender charm Goldman wrote in novel and script form.

Ang Lee went back to his native Taiwan to shoot a film close to his cultural roots and immediately grabbed everyone by the hair to lift up as much as the martial artists themselves in stunning choreography that encompasses the wuxia genre when they were at its peak in the 60s and 70s. It is a film that was strongly applauded in the West as a counter-flow, where a foreign culture influenced the Western market rather than the other way around, although the film does merge East/West manners on approaching characters, thus reducing cultural authenticity. Lee had a solid career up to this point and would only raise his profile when he later did Brokeback Mountain and Life of Pi, all winning Oscars.

Niki Caro made her breakout directorial effort with the story of a Maori girl who seeks to become chief of the tribe despite it being reserved from men. Like the film listed above, this was a cross-cultural film, this time of a native New Zealand story with a young girl as the central character to the story. Keisha Castle-Hughes was only 12 when the film was made; the following year, she received a Best Actress Oscar nod and would be listed among the British Film Institute’s Top 50 films that should be seen by age 14.

A huge portion of the festival is aimed at showing the best of Canadian cinema, both in English and French. Only two Canadian films would win both People’s Choice Award and the Genie/Canadian Screen Award (their Oscars) for Best Picture. One was 1986’s Decline of the American Empire by Denys Arcand (who did win the Best International Film Oscar for its sequel, Barbarian Invasions), and the other was Lenny Abrahamson’s Room. It got him an Oscar nod for Director, plus a Best Picture nomination, and began Brie Larson’s sweep to the Best Actress win. It also gave us Jacob Tremblay as among the list of cute child actors who are quite good at what they do. But, when we look at films if they hold up 5 years from its release, Room certainly maintains its power.

Now, for my epilogue about the first People’s Choice Winner. It should be stressed that Girlfriends, which I recently watched courtesy of Criterion Channel, was funded with mostly grants and took another three years to complete because there was no money for post-production. And it was directed by a woman, Claudia Weill, now a TV director professor at Columbia University. Christopher Guest and Bob Balaban were in supporting roles; her next film, It’s My Turn, starred Michael Douglas and Jill Clayburgh. She also was an Oscar nominee with Shirley Maclaine in the documentary The Other Half of the Sky: A China Memoir. She has also directed plays, TV movies, and several shows, most recently an episode of Girls.

Why do I write this? Because this is what these film festivals are all about. This is why independent film matters. Although big-time films, some of them great, are using it as a platform to Oscar ambitions (Argo, 12 Years A Slave, La La Land, Roma), I do feel personal that it is being hijacked for the big studios and not for a more truly diverse section that doesn’t get coverage. Toronto served us Baz Luhrmann’s debut Strictly Ballroom, Billy Elliot by Stephen Daldry, Roger & Me by Michael Moore, and Chariots of Fire which sprinted its way by the big films of 1981 to a Best Picture Oscar. And to have an ending to the epilogue, here is Stanley Kubrick’s supporting remarks on Girlfirends:

“I think one of the most interesting Hollywood films, well not Hollywood — American films — that I’ve seen in a long time is Claudia Weill’s Girlfriends. That film, I thought, was one of the very rare American films that I would compare with the serious, intelligent, sensitive writing and filmmaking that you find in the best directors in Europe. It wasn’t a success, I don’t know why; it should have been. Certainly I thought it was a wonderful film. It seemed to make no compromise to the inner truth of the story, you know, the theme and everything else…

This film that Claudia Weill did, I think she did on an amateur basis; she shot it for about a year, two or three days a week. Of course she had a great advantage, because she had all the time she needed to think about it, to see what she had done. I thought she made the film extremely well.”

The debuted works and internationalization should give us more of those works instead of mainstream features that are now commonplace. 2011’s winner, the Lebanese drama Where Do We Go Now was a refreshing choice. Hopefully, Toronto and other festivals keep going with the independent leads over the big studios as part of their select showcase.