Featured: The One Timers – Actors As A Director 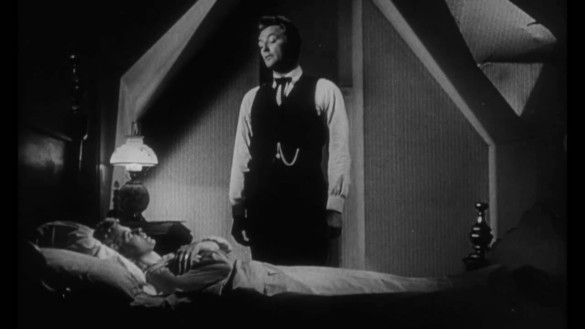 Actors want to be directors. Clint Eastwood decided to make his own movies because he was tired of the lack of organization and the length of time a director took for one simple shot. Orson Welles, Lawrence Olivier, John Cassavetes, Sydney Pollack, and George Clooney are among the list of successful actors/directors and the Academy has awarded some of their works with Oscars. More recently, we’ve seen John Krasinski, Jordan Peele, Bradley Cooper, and now Jonah Hill and Olivia Wilde sit behind the camera for the first time. A few works are incredible debuts, others are average. Some only give it one shot and never make another movie again. These three are notably good one-time directed films that have gotten a second look years later and are worth the view.

Charles Laughton only had this one directorial effort because the film was not a critical nor a commercial success. Only later was the film reevaluated and became a noted classic with its sinister self-anointed preacher, Harry Powell (Robert Mitchum) who is a serial killer going after hidden money but only two children know its location. Wearing the tattoos of “Love” and “Hate” on opposing fingers and his striking baritone cry of, “Children!,” Powell terrorizes them to get his hand on the money, only to find help in an old woman (silent film star Lillian Gish) who is a believer of the verse, “Beware of false prophets.”

Laughton’s sole film is a masterpiece with its German expressionist style that is mixed with Southern gothic an interesting twist for a point-of-view from a classically trained Englishman. Yet, his handling of the story and how he directs the two children as it is from their point-of-view. Maybe because this was in the 1950s where peace and prosperity were blooming and movies were now widescreen in Technicolor it did not resonate, but Laughton gives us a frightening look of a monster is very much a human being since Mitchum’s characters, and the original novel its based on, comes from the story of Harry Powers, who used the “lonely hearts” ads to find widows, marry them, steal their money, and kill them before leaving. “Don’t he ever sleep,” the young boy asks when he hears the stalking preacher-killer come through the fields at night continuing his hunt.

Marlon Brando’s sole effort was a Western about a bank robber who seeks revenge against his former mentor who betrays him. But it goes beyond the Western genre, something that would be too complex for someone like John Ford to make; it was supposed to be a Stanley Kubrick effort, but for conflicting reasons, he was fired and Brando volunteered for the job. It is very Freudian and features the psychoanalysis of the characters, namely Brando’s character, Rio. He has spent five years in jail after he was left hanging with none of his loot from his mentor named “Dad,” played viscerally by Karl Malden. When he tracks him down and sees that he has settled down to being a respectable figure, Rio must out the hypocrisy when he tells him, “You’re a one-eyed jack around here, but I’ve seen the other side of your face.” The effort to make it was a lengthy and conflicting one, going over-budget (three times over the initial) and shot an extra five hours of footage (the runtime is 2:21), marking Brando as a failure in the director’s chair. It is not a masterpiece equal to other Westerns, but it is one to be admired for Brando’s boldness in trying to rewrite the traditional Western genre.

Gary Oldman went to England’s kitchen sink realism in a highly graphic way with a semi-autobiographical account of a dysfunctional (to put it mildly), working-class family in Southeast London. Living in public housing, Ray Winstone plays a hot-tempered husband who is vicious profane and abusive to his wife and states that his violent behavior is reflected by the abuse he suffered under his father. Kathy Burke plays the wife who finds out she’s pregnant yet goes on smoking and drinking. His brother-in-law is a drug addict who steals from them (and is later caught) and gets his fix by teaming up with his friends to steal from others. Oldman is apparently working on his second directorial picture which would be interesting to see clearly of how disturbingly blunt yet how much Nil By Mouth looks like if Mike Leigh made a profane portrait of daily life. It is not a pretty sight and there may be scenes that are repulsive, but in the world that Oldman grew up in, it is his reality where the toxicity is the norm.

A lot of actors – Brie Larson, Max Minghella, Paul Dano, Boots Riley, Cristolph Waltz – are seeking or have gotten their chance to get their directing debut in and see if they can pull off the magic trick of acting other actors and piecing together other scenes at once. Only a few can say they have made a great film while others will only have that one swing. It’s those one hacks that are really interesting to watch because some could have slipped through the cracks and the. actor has not gotten a second chance at directing. For these three, two are no longer with us but have left an individual film worth studying and rewatching while the third may (or may not) do a second full-length film; if not, the one already made is already good enough.